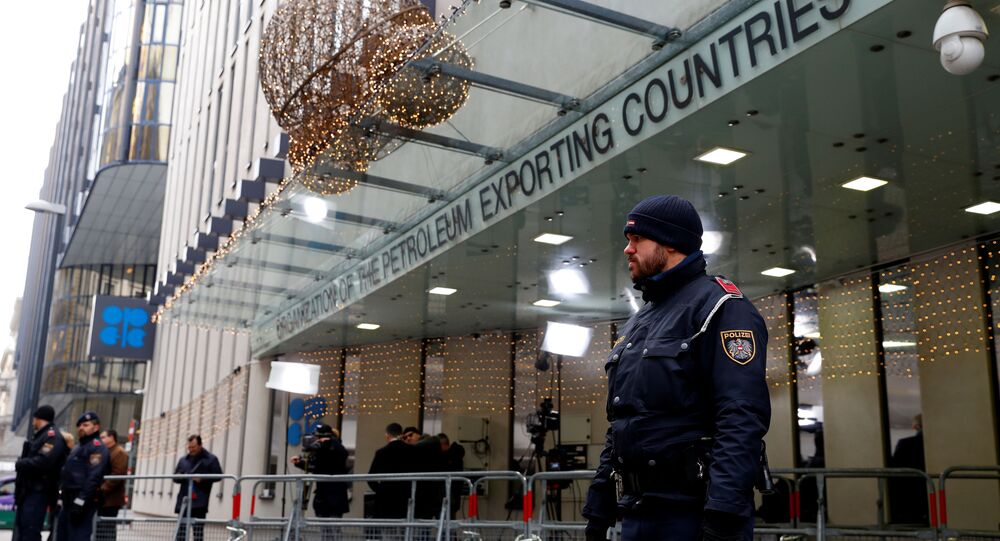 The countries participating in the JMMC are expected to discuss a variety of questions, among which is the future of the output deal, set to expire in March 2020.

Following a six-hour meeting held by OPEC members, Iranian Oil Minister Bijan Zangeneh revealed that the organization has reached an agreement on the output cut deal.

"Yes, we have consensus," he said.

OPEC+ has been reducing oil production since 2017 to counter oversupply on the global market caused by a recent boom in oil output in the United States.

The OPEC+ oil output cut agreement has since been repeatedly extended, while its conditions keep changing. The agreement stipulates to cut supply by 1.2 million barrels per day from the October 2018 level for the first half of 2019. In July, OPEC+ extended the agreement on the same terms through March 2020.

The OPEC+ Ministerial Committee, following a meeting on Thursday, recommended an additional reduction in production under the deal by 500,000 barrels per day in the first quarter of 2020; new quotas for countries have not yet been determined.

A meeting of all OPEC+ countries will be held on Friday, at which discussions will continue.

OPEC’s second largest oil producer Iraq prefers the deal to be extended at least until the end of 2020. According to Iraqi Oil Minister Thamir Ghadhban, there are three options for the extension of the deal. In particular, the extension until March, July or the end of 2020. He stressed that the final decision will be based on the consensus of all OPEC+ members.

Oman, a non-OPEC country, also favors extending the OPEC+ oil production cuts deal until the end of 2020, as the US presidential election, scheduled for November 2020, and future administration policies, including in trade issues, could create uncertainty for global oil demand.

In September, Equatorial Guinea’s Hydrocarbons Minister Gabriel Mbaga Obiang Lima noted that if US President Donald Trump loses the 2020 election, US oil production would begin to fall rapidly, which would force OPEC to increase production to contain prices.

Russia, a key non-OPEC producer, stated that the US presidential election should not be taken into account. According to Russian Energy Minister Alexander Novak, it is necessary to look at the overall trade and economic relations and at economic growth rather than political election procedures that exist all over the world. In addition, following the November reports on a possible extension of the deal until June next year, he stated that it was too early to talk about the deal extension as much could change in the market before the deal runs out in April. The Russian minister reminded reporters that all previous extensions to the 2017 deal had been agreed in the month before the expiry date.