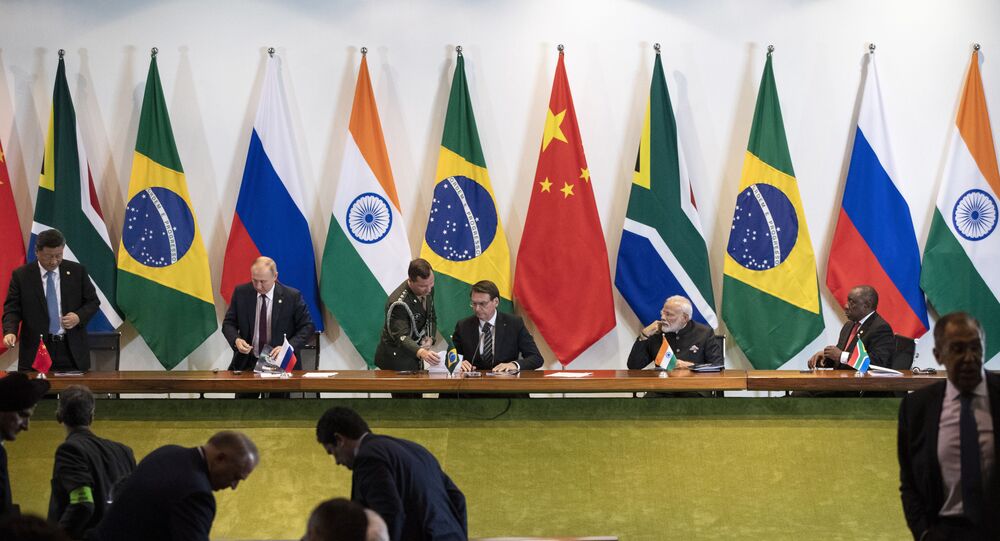 The city of Brasilia hosted the 11th BRICS summit this week, with the leaders of Russia, China, Brazil, India, and South Africa discussing political and economic relations within the bloc.

It looks like a bird, an airplane or a dragonfly, but despite its artistic layout, which can be seen from above when you are about to land in Brasilia, everything in the city seems to be focused on rules and order. The blocks in the Brazilian capital have alphanumeric codes, such as “SQN 302”, or “CLS 303”, which were supposed to make navigation easier in pre-GPS 1960s, when the city was founded.

1st thing you see near Brasilia airbase is this banner with President Jair Bolsonaro’s name and Brazil’s slogan “Order and Progress”. BRICS organizers definitely focused on “order”: road blocks & armed soldiers everywhere, they accompany shuttles to venues as if it's a warzone. pic.twitter.com/i4mpZERgYa

Security measures were so tough that sometimes the delegates complained about not being able to visit media zones to talk to journalists. Members of the press had their own share of security-related problems, such as not getting access to BRICS venues despite having proper credentials and requesting accreditation in a proper manner.

Nevertheless, the summit went on as planned, with leaders holding bilateral meetings and discussing the broader bloc agenda.

Russian President Vladimir Putin arrived in Brasilia on Wednesday and met with his Chinese and Indian counterparts. His talks with the president of the host country were scheduled for Thursday and Jair Bolsonaro was the last leader with whom Putin had a one-on-one meeting at BRICS this year. Ever since Jair Bolsonaro took office less than a year ago in January, there’ve been rumors in the press that he might put more emphasis on Brazil’s relations with the US, rather than with Russia and the country’s BRICS allies. But, according to Vladimir Putin, relations between Brazil and Russia, as well as between Brazil and BRICS as a whole, are still positive:

“Within BRICS we never had obligations to work only with each other. BRICS is not a closed organization. Each sovereign country has a right to have its own priorities, to develop in a way it wants to. It’s absolutely clear that the US, as a global power situated on the US continent, cannot be ignored by Brazil, it’s natural. As for our relations – they are developing quite well in my opinion.”

BRICS events usually provide space for both diplomatic and business contacts, so almost every summit is a place where you could meet government officials and diplomats, as well as bankers and high-level business executives.

In the audience at the BRICS Business Forum I saw top diplomats (Russia’s Sergey Lavrov was chatting with his Chinese counterpart Wang Yi while both waited for leaders to arrive), as well as other ministers from member states and key business figures. pic.twitter.com/Gh0m2L1P5b

​The BRICS Business Forum is a format which was created during the bloc’s summit in South Africa’s Durban six years ago to promote trade, business and investment opportunities in the five member nations of the bloc. Its sessions run in parallel with the main BRICS meeting.

According to Vladimir Putin, Russia is prepared to work with BRICS partners on joint projects in aircraft and rocket manufacturing, healthcare, pharmaceuticals and space exploration, as well as in areas such as SMMe’s:

“I would like to remind you that Russia has proposed launching a data exchange system for small and medium-sized businesses within BRICS. This would allow our businesses to receive the latest information about goods, services, and suppliers and to look for new partners.”

According to member of the BRICS Business Council, Kirill Dmitriev, who is also the CEO of the Russian Direct Investment Fund (RDIF), Russia’s initiative to create national coordination centers to support foreign investments within BRICS has been tested domestically and received the council’s support:

“These national centres will operate as a one-stop shop for investors from other BRICS countries. They will respond to enquiries, provide additional transparency and simplify investment-related issues. In Russia, this function is performed by RDIF, its Invest in Russia web portal, and the National Centre for Promoting Investments in Russia's Regions, which was created by RDIF.”

BRICS member nations have shown a high level of commitment to their goals this year. According to the interim compliance report compiled by the BRICS Research Group, Russia, China, South Africa, Brazil and India reached an average compliance level of 85% on the top ten commitments made during the bloc’s 2018 summit in Johannesburg, compared to past scores of 74% for the 2011 Sanya meeting and 64% for the 2012 Delhi summit. Even though goals of compliance on regional security within BRICS are at a low 40%, some commitment scores, such as health care, are currently at 100%.

The idea of BRIC was first coined in the early 2000s, and initially, the bloc of three, and later four developing economies was transformed into a diplomatic club in 2006 and became a platform for leaders’ meetings in 2009. South Africa joined BRIC in 2010.

Russia will be taking over the BRICS presidency in 2020. It’s expected that the bloc’s summit will be held in Saint Petersburg in the summer of next year.