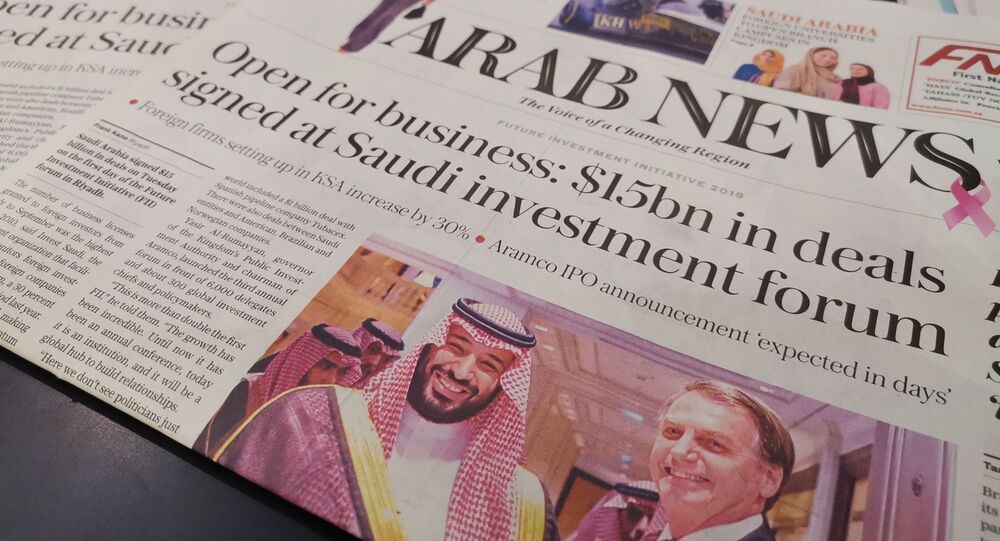 Saudi Arabia is hosting the third Future Investment Initiative forum (FII) this week – a platform for expert discussions on growth opportunities and emerging industries, with Moscow-Riyadh cooperation becoming one of the key focuses.

Saudi Arabia has made a giant leap in improving its business climate recently, and it looks like the strategy is paying off. There are many signs that the country is opening up to foreigners – from the fact that you get a Saudi e-visa within 24 hours to visit a business event, to global business events themselves becoming very common for the Kingdom.

Watch the highlights from Day 1 of #FII2019, where thousands of delegates from all over the world were immersed in a rich agenda focused on the future of global investment. pic.twitter.com/DBlmDw4Nnc

​On the first day of the Future Investment Initiative-2019, Saudi Arabian General Investment Authority (SAGIA) announced that 23 agreements totalling $15 billion in value will be signed at the forum.  According to the Governor of SAGIA, Ibrahim Al-Omar, this reflects the Kingdom’s growing investment potential and the success of its ambitious economic reforms program:

“This month, Saudi Arabia climbed 30 places in the World Bank’s Doing Business 2020 report, becoming the most improved economy globally. The indicators are clear: Saudi Arabia is not only open for business, it’s the economy of the future”.

Security and trust are crucial in building long-term investment strategies, so these topics were the first to be discussed at the FII plenary session.

FII panel: While views of EU and the US experts on global economy in the next decade seemed to be cautious/pessimistic, their colleagues from Asia, Russia and the Middle East preferred to focus on solutions/positive trends, rather than on risks and uncertainties. (Photos by FII) pic.twitter.com/J0tSpPaeSr

​Kirill Dmitriev, the CEO of the Russian Direct Investment Fund (RDIF), speaking at the panel meeting, mentioned the fund’s success in forging alliances with Chinese and Saudi partners as good examples of building trust – something which Russia emphasized in its relations with other nations:

“On the geopolitics I believe Russia-Saudi reconciliation is one of the greatest historical examples of quick reconciliations that brought significant value and stability to oil markets.” – Dmitriev said – “And Russia is open to cooperate with China, with Saudi, with the US and we believe that the tensions really need to subside, and we - sovereign wealth funds - are playing a role in building trust".

RDIF CEO Kirill Dmitriev talks about the need to reduce geopolitical tensions and to focus on common approaches to solving world problems instead. pic.twitter.com/K6dMGo13gH

​According to Dmitriev, RDIF’s portfolio accounts for about 8% of Russia’s GDP, with the fund’s key foreign partners, such as the Saudi Mubadala Development Company able to get instant access to all that potential. Mubadala’s managing director Khaldoon Khalifa Al Mubarak pointed out that investing in Russia turned out to be a good choice:

“Just to echo what Kirill has said. Trust is so important, and confidence, especially between sovereign wealth funds. We Established that level of relationships, when we invested in Russia. We entered Russia – but we didn’t know Russia. We needed a partner. RDIF came in, we invested together in a very difficult time. We conducted 45 transactions, that we have monetized a lot. We have seen double-digit returns!”

The year 2019 has been a very successful one for Russia’s role in the Middle East – a role, which, at times could hardly be compared with the influence of other countries.  The Kingdom of Saudi Arabia has become one of Moscow’s closest allies in the region. Russian President Putin visited Riyadh in the October for the first time since 2007, with his visit being marked by the signing of agreements on humanitarian, diplomatic and economic cooperation.  Russian media is also involved in the process, with Sputnik announcing plans to open a media hub in Riyadh – a project, which was made possible, in part, due to support of the RDIF.

RDIF CEO Kirill Dmitriev spoke to Russian,Saudi, international media on the sidelines of the FII. In an exclusive Sputnik interview,Dmitriev said that 2019 is a breakthrough year for Russo-Saudi relations. He also talked about AI,space technologies and Saudi agricultural projects pic.twitter.com/uf0gMrjHtI

​The Russian Direct Investment Fund was established in 2011 with the aim of improving the country’s investment climate. Three years ago it was transformed into the sovereign wealth fund of the Russian Federation.

Together with the Saudi Arabia Public Investment Fund (PIF), RDIF has invested more than $2.5 billion into over 30 projects, among them the Zapsibneftekhim project, one of the world’s largest petrochemical complexes, as well as hydropower stations in Karelia and St. Petersburg's Pulkovo Airport. Key areas for Russian-Saudi investment are infrastructure, logistics, construction, manufacturing, technologies and retail.

Saudi Arabia will be hosting the G20 summit in Riyadh in November of 2020, so events like the FII, which had over 6000 participants, including several world leaders, are giving the Kingdom a chance to underline its central role in global politics.