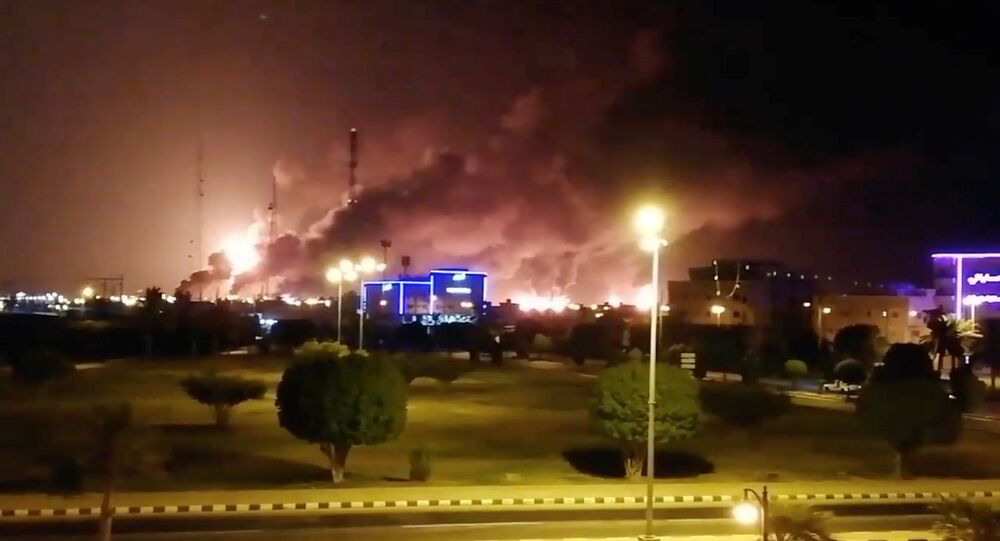 Trump has not specified yet whether he was considering a military response following the drone strikes, which his Secretary of State Mike Pompeo blamed on Iran, but said he was waiting for more information from Saudi Arabia. Iran denies any role in the attacks, which were claimed by Yemeni Houthi militants.

US President Donald Trump has made a vague promise to help America's allies in the Middle East, after attacks on critical oil facilities in Saudi Arabia marked yet another uptick in tensions in the region.

In a tweet on Monday, Trump maintained that the United States, as a leading crude exporter, has no interest in Middle Eastern natural resources.

"We don’t need Middle Eastern Oil & Gas, & in fact have very few tankers there, but will help our Allies!" he wrote.

Because we have done so well with Energy over the last few years (thank you, Mr. President!), we are a net Energy Exporter, & now the Number One Energy Producer in the World. We don’t need Middle Eastern Oil & Gas, & in fact have very few tankers there, but will help our Allies!

Trump upped the ante in a later tweet, claiming that Iran had lied about downing a US spy drone in July. Back then, Iranian officials said the drone was shot down when it violated the country's borders, disputing the US version that it was in international airspace.

"They stuck strongly to that story knowing that it was a very big lie," Trump said of Iran's account of where the attack occured. "Now they say that they had nothing to do with the attack on Saudi Arabia.​"

Remember when Iran shot down a drone, saying knowingly that it was in their “airspace” when, in fact, it was nowhere close. They stuck strongly to that story knowing that it was a very big lie. Now they say that they had nothing to do with the attack on Saudi Arabia. We’ll see?

Earlier in the day, Trump said the US was "locked and loaded depending on verification" of the culprit and waiting for the conclusions from Saudi investigators.

Major oil facilities in eastern Saudi Arabia were targeted in a drone attack on Saturday, prompting the kingdom to halt half of its oil production and sending the oil price soaring.

Scott L. Montgomery, an affiliate faculty member at the Henry M. Jackson School of International Studies at University of Washington, says: "While the Saudis have said that the damage can be repaired or minimized in a few days, so that operations will return to a near-normal state, this can't be wholly confirmed without more details."

"Nonetheless, it seems likely that this is the case. If so, then upward pressure on oil prices will be reduced soon, perhaps by the end of the week. On the other hand, if there is a military exchange between the US and Iran, prices could go even higher, depending on how serious an exchange takes place. A key factor is any loss of life on either side. That could escalate the situation significantly. As always, there are a number of uncertainties and no one is in control of the entire situation."

Who is to Blame?

Although the Houthi rebels, who are fighting the Saudi-led coalition in Yemen, admitted to carrying out the attack, US Secretary of State Mike Pompeo claimed, without providing evidence, that Iran was the real culprit. Republican Senator Lindsey Graham, a major Trump ally, went even further and urged the US administration to consider retaliating against Tehran. Reports in US media suggest that a military option remains on the table.

Iran — which expresses moral support to the Houthi cause but denies arming the rebels — has rejected the accusations as "unacceptable" and "baseless."

What is Going on in the Middle East?

The Houthis regularly carry out drone attacks on facilities in Saudi Arabia, which is involved in the Yemeni conflict as part of an Arab coalition at the request of the internationally-recognised government. In May, the Houthis claimed responsibility for a drone attack on a major Saudi pipeline. At the time, Riyadh claimed Iran was behind the strike, but Iran dismissed the accusations.

Relations between the United States and its ally Saudi Arabia, on one side, and Iran on the other, have deteriorated rapidly since Trump left the 2015 nuclear deal and mounted a "maximum pressure" campaign against the Islamic Republic over allegations that it is illegally working on nuclear weapons and supporting terror groups.

Iran's crucial energy exports have plummeted since then due to crippling US sanctions, but the country has been reluctant to negotiate a new nuclear deal, as Trump demands, and insists it has respected its international commitments. At the same time, Iran has started rolling them back as a way to put pressure on the European signatories to the nuclear deal.