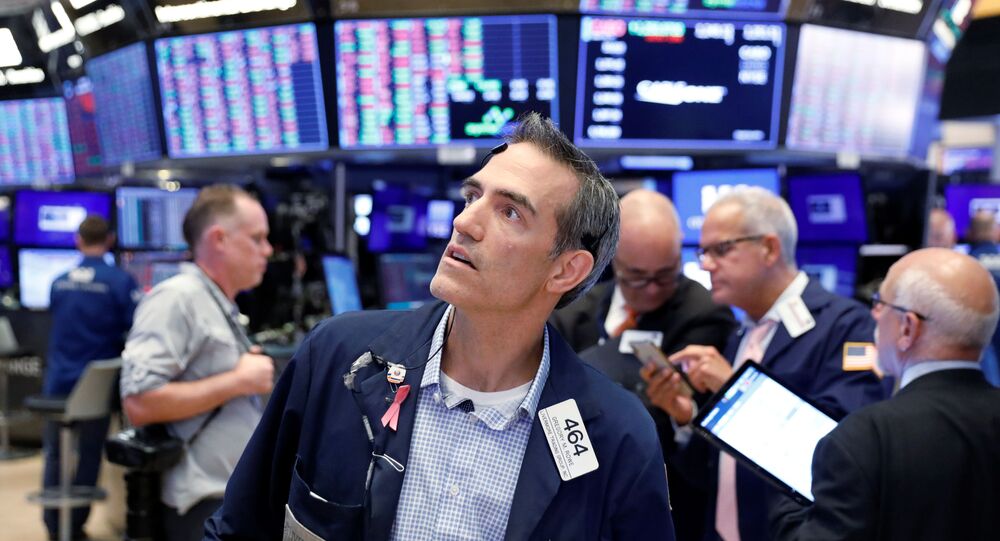 Investors have been increasingly investing in safe-haven assets, such as gold, amid ongoing uncertainty in the US-China trade war and reluctance of the US Federal Reserve to significantly cut interest rates – the latter of which, as President Donald Trump argues, undermines the American economy.

World stock indices fell early on 28 August amid continuing fears that the US economy might soon face another recession. These concerns are largely fuelled by the so-called inversion of the US bond yield curve, a situation where short-term bonds show better results than more long-term papers, something that often precedes an economic recession in the US.

American state debt bond yields have been consistently falling across the board throughout the year. 10-year US bonds continued to fall on 28 August, reaching a yield level of 1.45%, lower than two-year papers, which are showing 1.5% yields. 30-year bonds are still more profitable, with 1.936% yields, but are continuing to break new records by falling to historically low levels. According to experts interviewed by Reuters, the signs of a possible recession could convince the US Federal Reserve to further slash interest rates, a move that the regulator hasn’t excluded in the past.

Amid the falling yields on 10-year US bonds, American stock indices also showed a decline at the start of the trading day, with NASDAQ 100, which features the performance of top technological companies, losing 0.45% and the S&P 500, representing the prices of the 500 biggest American companies, sliding by 0.2%. The major American software company Autodesk Inc. alone lost 11.15% in market value in a single day.

European stock markets mostly followed the trend, with France’s key index CAC 40 losing 0.76%, Germany’s main DAX diving by 1.14% by the end of the day, and the UK’s FTSE 100 index falling by 0.76% despite going green at the opening of market trading.

The British pound also fell deep into the red, losing between 0.5% and 0.7% on 28 August on the news that UK Prime Minister Boris Johnson had requested the Queen's permission to suspend Parliament until 14 October, essentially leaving the latter no time to put constraints on the possibility of a no-deal Brexit for London.

Although gold, which is considered to be a safe-haven for investors during times of uncertainty, has shown a minor decline over the day, its growth has been sustained throughout the past months. Some economic experts believe that this positive momentum has been bolstered by the ongoing trade war between the US and China, with the two sides continuing to impose new tariffs and failing to reach an agreement on a trade deal.

Our Federal Reserve cannot “mentally” keep up with the competition - other countries. At the G-7 in France, all of the other Leaders were giddy about how low their Interest Costs have gone. Germany is actually “getting paid” to borrow money - ZERO INTEREST PLUS! No Clue Fed!

The US Federal Reserve slashed interest rates to 2%-2.25% on 31 July, but US President Donald Trump insisted that the reduction should have been greater. He even alleged that the regulator's actions are more harmful for the US economy than China's alleged abuse of trade practices, which served as the pretext for Washington to start its trade war against Beijing.