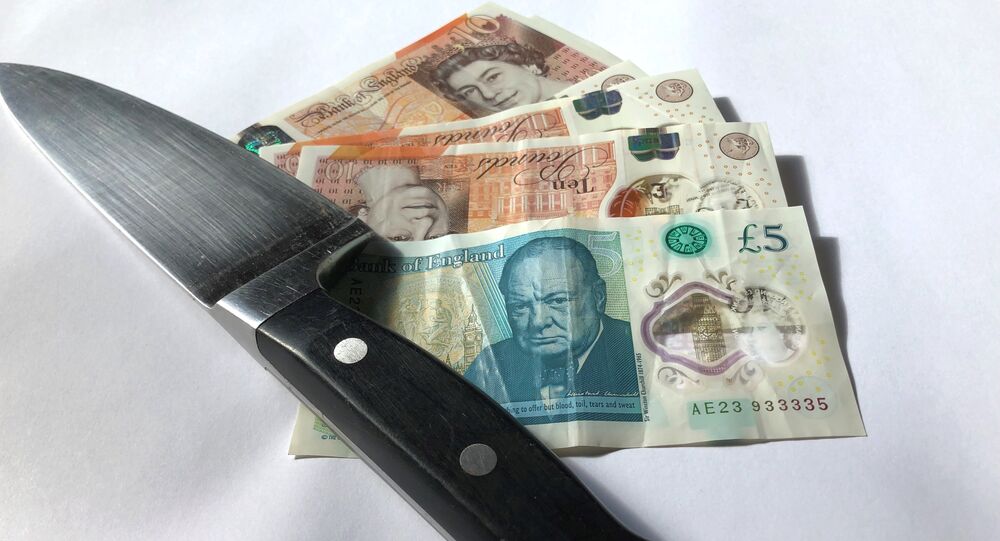 The pound sterling has experienced a significant drop since Boris Johnson was elected prime minister on 24 July 2019, with the Bank of England warning in early August that Britain has a 33 percent chance of plunging into recession by 2020.

The British pound is currently falling in value, with the potential to hit a 2016 low against the US dollar, an analysis by Bloomberg's FX and rates strategist Vassilis Karamanis suggests.

Although the British currency managed to avoid dropping below the “psychological level” of $1.20 in August, despite uncertainty over Brexit negotiations, market analysts noticed the presence of a so-called “Downside Tasuki Gap” candlestick formation pattern on Friday, 16 August, which usually signifies the continuation of a downward trend.

An analysis of the dollars-per-pound ratio in candle patterns has showed that the emergence of this formation can historically be associated with a fresh cycle of lows, Bloomberg reports, and can be a good indicator of a currency’s short or medium term direction, which is currently downward.

As the pound sterling hit $1.2083 on Tuesday, 20 August by dropping 0.4 percent from its previous indicator, the Bloomberg analyst argues that there is now a risk that the pound could drop as low as $1.1841 against the US dollar – which was the lowest point reached by the sterling, lasting for several minutes, during the October 2016 flash crash.

The pound sterling’s previous significant drop was on 12 August, when it reached $1.2015 - the lowest level since January 2017, when the pound lost ground after a Brexit ruling by the UK Supreme Court.

As the stalemate over Brexit negotiations continues, the risk of Britain leaving the EU without a deal is becoming a feasible outcome, a possibility for which EU and British officials are preparing, as recent reports have shown.

The British intergovernmental document “Operation Yellowhammer”, which was leaked on Sunday, 18 August, pointed out some potential “worst-case scenario” consequences of Britain leaving the EU by 31 October without a deal in place, including fuel and medicine shortages, price spikes, and food delays.

In early August 2019, the Bank of England warned about the possibility of the UK economy plunging into recession by 2020, pointing to the pound's prolonged drop against other major currencies due to “heightened uncertainty” and “declining confidence” deterring investments in the British economy, with the depreciation of the sterling raising inflation.

The pound sterling entered a downward trend in July 2019, while crashing below $1.22 against the US dollar after Boris Johnson was elected as British prime minister on 24 July 2019, with market actors dreading the possibility of a no-deal Brexit.