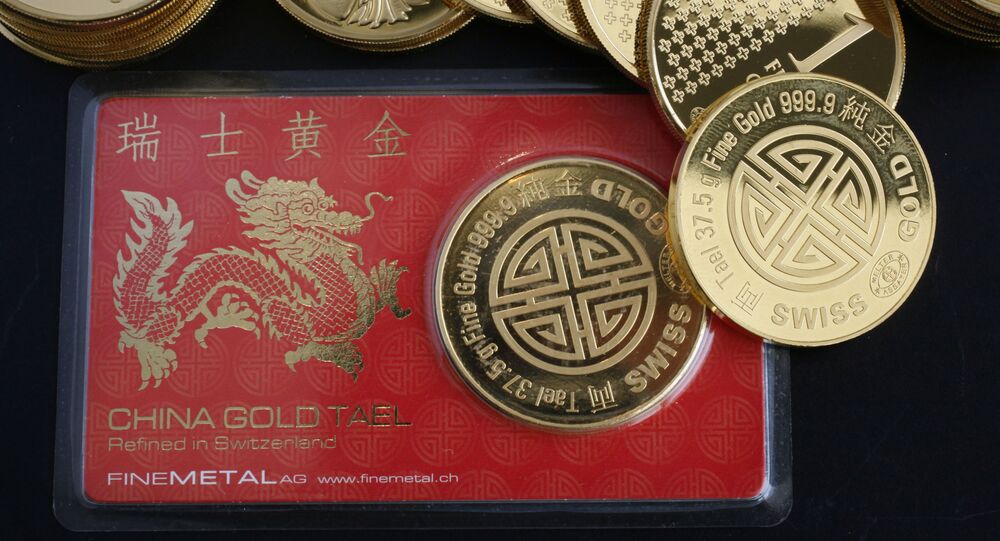 Despite efforts to produce a trade deal and put an end to their tariff spat, Beijing and Washington have become further mired in an economic row since US President Donald Trump announced his intention to tax $300 billion in Chinese goods. A new blow came several days later when POTUS blamed China for manipulating its currency.

China has been buying gold for 8 consecutive months and added 10 tonnes of gold to its boosted reserves of the precious metal in July, Bloomberg reported. Beijing has purchased 94 tonnes of bullion, considered a safe haven for investments, since the beginning of the year. According to the People's Bank of China, the country’s gold holdings reached about 1,945 tonnes, or 62.26 million ounces. It is worth about $90 billion at current prices of about $1,500 per ounce.

In the meantime, the cost of gold has hit a six-year high amid the slowdown of global economies and central banks cutting interest rates. As analysts from Societe Generale pointed out, China went on a gold shopping spree to diversify its reserves away from the US currency and protect itself against the risks of the trade war.

"The growing threat of a currency war in recent days could add to this momentum and prove an overall tailwind for gold”, the group of analysts said.

The statement has been echoed by BMO Capital Markets managing director of commodities research Colin Hamilton, who also said that the PBOC’s move reveals de-dollarisation efforts.

“At the central bank level [the move] is definitely to de-dollarise”, Hamilton told Kitco News.

As the outlet points out, however, the relative size of China’s gold holdings still equaled $3.1 trillion last month.

Nevertheless, China has become one of the leaders in the new gold rush along with Poland and Russia, diversifying their reserves. The Russian Central Bank has stocked up 96.4 tonnes of gold since January, confirming last week that the country’s total gold reserves had reached $100.3 billion as of July 1. Altogether, central banks bought 374 tonnes of gold in the first half of this year, which is the largest-ever acquisition by public institutions in the first 6 months of a calendar year, the World Gold Council reported last week.

The gold shopping spree comes amid a US-China trade spat that further escalated this week. President Donald Trump condemned a move by Beijing to devalue the yuan, calling it "currency manipulation” because Beijing allowed the yuan to plummet to an 11-year low against the dollar, causing financial markets to tumble. Trump’s statement followed an announcement by US Secretary of the Treasury Steve Mnuchin on Monday that Washington had designated China a "currency manipulator", citing alleged violations by Beijing and the PBOC of "China's G20 commitments to refrain from competitive devaluation".

In response, the PBOC slammed the decision, insisting the US side had “disregarded the facts and unreasonably labelled China” like this.

This was preceded by Trump’s pledge that he would slap 10 percent tariffs on a further $300 billion worth of Chinese imports starting 1 September, a day after the US and China wrapped up trade talks in Shanghai.