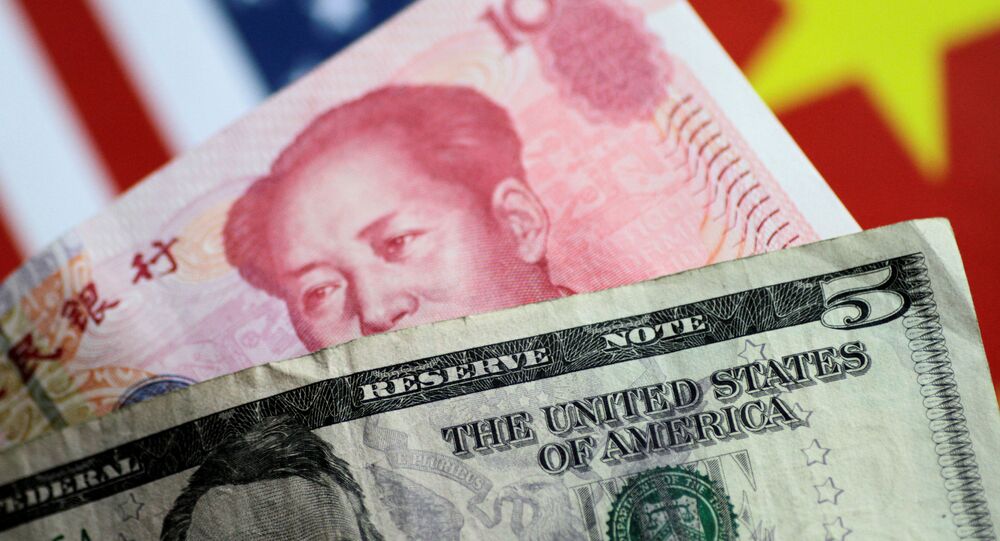 In a statement on 6 August, the People's Bank of China (PBOC) slammed Washington's decision to designate China as a "currency manipulator".

China's yuan has continued its nosedive, weakening to 7.0488 to the US dollar on Wednesday, about 0.4 per cent below its level late day yesterday.
China's Central Bank set the opening level for trading 7 August at 6.9996 to the dollar, the lowest since 15 May 2008.
Earlier in the week, financial markets tumbled as Beijing allowed the yuan to plummet to an 11-year low against the dollar.

The US labelled China “currency manipulator”

In a statement on 6 August the People's Bank of China slammed Washington's decision to designate China as a currency manipulator as the Asian currency nosedived to its lowest-ever level, breaching the seven yuan-per-dollar threshold.

"The US side disregarded the facts and unreasonably labelled China a 'currency manipulator'. The Chinese side is firmly opposed to this", the statement read.

On Monday, US President Donald Trump condemned China's move to devalue the yuan, calling it "currency manipulation" and claiming that this will significantly weaken Beijing.

The statement followed the announcement by US Secretary of the Treasury Steve Mnuchin on Monday that Washington had designated China a "currency manipulator", citing alleged violations by Beijing and the PBOC of "China's G20 commitments to refrain from competitive devaluation".

Earlier, US President Donald Trump pledged he would slap 10-per cent tariffs on a further $300 billion worth of Chinese imports starting 1 September, a day after the US and China wrapped up trade talks in Shanghai. Trump complained Beijing had failed to back up its pledge to purchase "large quantities" of agricultural products as he claims President Xi Jinping promised during the G-20 summit in Osaka.
The Chinese Foreign Ministry said that countermeasures would be installed if the US set in motion the tariff hike, with Foreign Minister Wang Yi stressing that tariffs are "not a constructive" way to resolve the bilateral trade war.
Washington and Beijing have been embroiled in a trade dispute since June 2018, when Trump announced he was imposing tariffs on $50 billion worth of Chinese imports to fix what he claimed were "unfair trade practices".