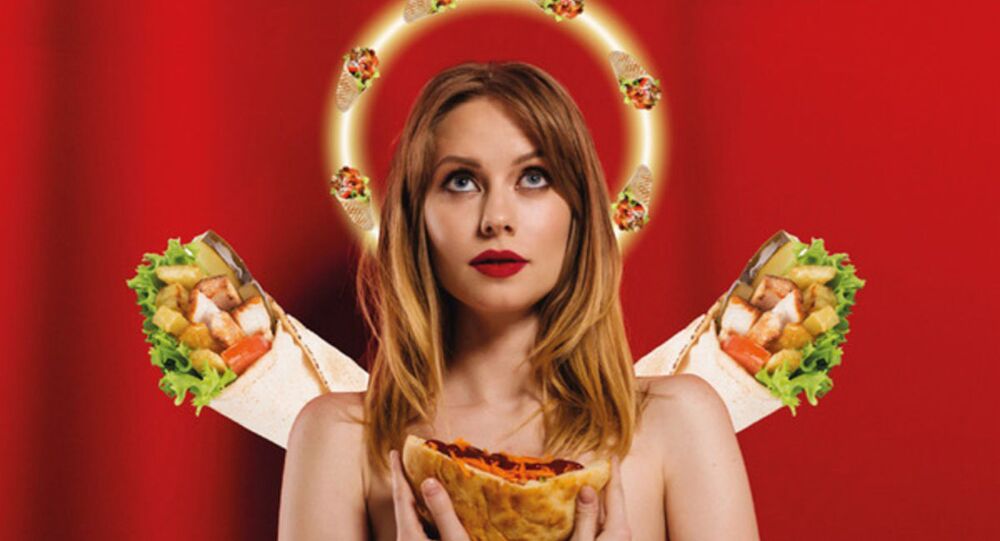 Although the Orthodox Church apparently deemed the use of Christian imagery obnoxious, the café owner opted for it in order to offer something new and steal the spotlight, confirming that she didn’t mean to offend believers’ sensibilities.

A Russian entrepreneur has come up with an extraordinary way to promote her eatery’s Asian specialty – a doner kebab, which is commonly referred to as “shawarma” in Russia.

A meat dish ad for her café in Perm features multiple reference to Christian symbols – something that Veronika Burdina has purposefully done to attract clients, admitting, though, to the Russian media outlet Ura.ru that she fully acknowledges that she is walking a tightrope.

The promotional materials, which were published on the café’s page on the Russian social network VKontakte and since deleted, sported a near-naked model posing as a haloed (with kebabs likewise featured in the nimbus) Christian martyr and declaring her love for “divine kebab wraps”.

“There is no point in enduring healthy food martyrdom, when there is divinely delicious ‘Shawarma ne za gorami’ (‘Shawarma Just Around the Corner’), where one can give in to the temptation without sinful damage to the figure”, the ad read.

Burdina shared that her team had been striving for non-conventional content that would go counter to the clichéd advertising patterns.

“There are well-established patterns that one can come across on the Internet, like ‘divine shawarma’. There are groups that discuss the taste of locally produced shawarma in Perm and other cities. These clichés became our starting point, making us move on and arrive at such imagery”, the café owner recounted. She stressed that she is no way aiming to offend anybody’s feelings or mock anyone, because she is herself “baptised in the Christian religion and has respect for all this”.

Despite explaining the purely commercial idea behind the promo materials, the news appears to have hit a raw nerve with the Russian Orthodox establishment. For instance, the Perm diocese is set to lodge a complaint with the police, press secretary Andrei Litovka posted on Facebook arguing it is "completely outrageous", but some netizens attempted to laugh it all off in their comments, with one questioning  whether the Church is aware of "which god" was brought up in the advertisement.

"I believe common sense will prevail," another posted, while a different commenter concluded that both sides are moving the wrong way: "The ad is indeed vulgar, but the Church is reacting inadequately," he shared.

Macallan Pulls 'Base Jumping' Advert After Complaints Called It "Irresponsible"