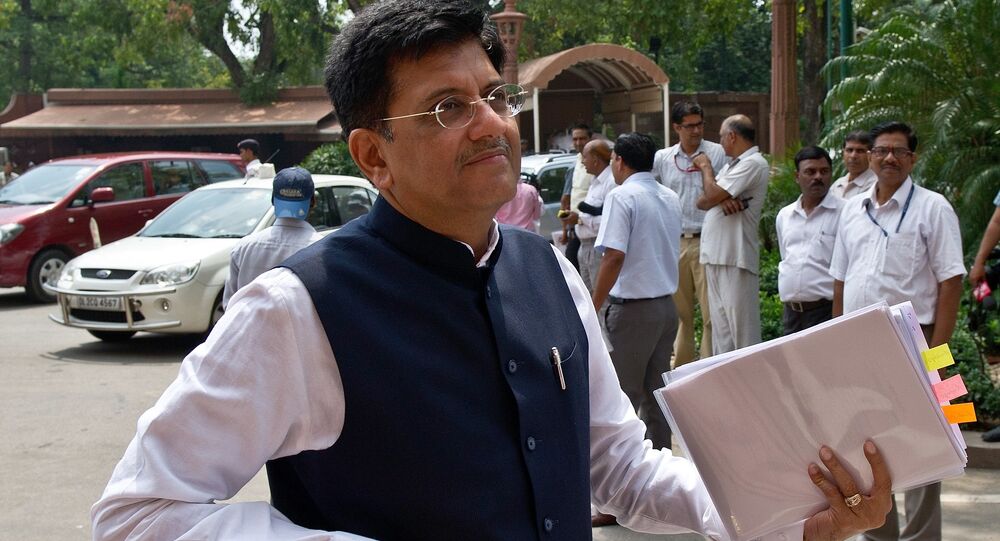 The Indian commerce minister’s statement comes three days ahead of US Secretary of State Mike Pompeo's scheduled visit to New Delhi in which trade tensions will be discussed. The talks will also lay the ground for the Modi-Trump meeting which is scheduled to take place on the sidelines of the G-20 Summit in Osaka, Japan.

New Delhi (Sputnik): The Indian government will not meet the demands set out by the Trump administration to maintain its eligibility of the Generalised System of Preferences (GSP), Commerce Minister Piyush Goyal said on Friday in Parliament.

The minister, who took over the ministry in the second-term of the Narendra Modi government, added that India is well-placed to handle the “crossfire” resulting from the ongoing trade war.

“Some of the demands that were raised on India were such that India could not yield. I think national sovereignty and national interest is paramount,” Goyal said on being asked if the government would initiate further negotiations in this regard with the US.

The Trump administration revoked India's GSP benefits on 5 June, which impacted only $240-$250 million of Indian exports, Goyal added, emphasising that given the size of the Indian economy, this has “no significant impact” on the country.

India exported goods worth $6.3 billion to the US under the GSP programme during 2018, which was 12.1% of India’s total export to the US in that year.

The minister’s statement comes three days ahead of US Secretary of State Mike Pompeo's scheduled visit to New Delhi, in which trade tensions will be discussed.

Ahead of his visit, Pompeo, while addressing business leaders in Washington on 12 June, said the US remains “open to dialogue, and hope that our friends in India will drop their trade barriers and trust in the competitiveness of their own companies, their own businesses, their own people, and private sector companies”.

Trade relations between India and Washington have witnessed several rough patches over past two years, with the US slapping tariffs on New Delhi, prompting retaliation.

As the US did not accept to India’s request for the withdrawal of duties on steel and aluminium products, on 15 June, India retaliated with the imposition of tariffs up to 120% on 28 US goods.

Besides the issue of metal tariffs, the US has also been pressurising India to slash tariffs on medical equipment.