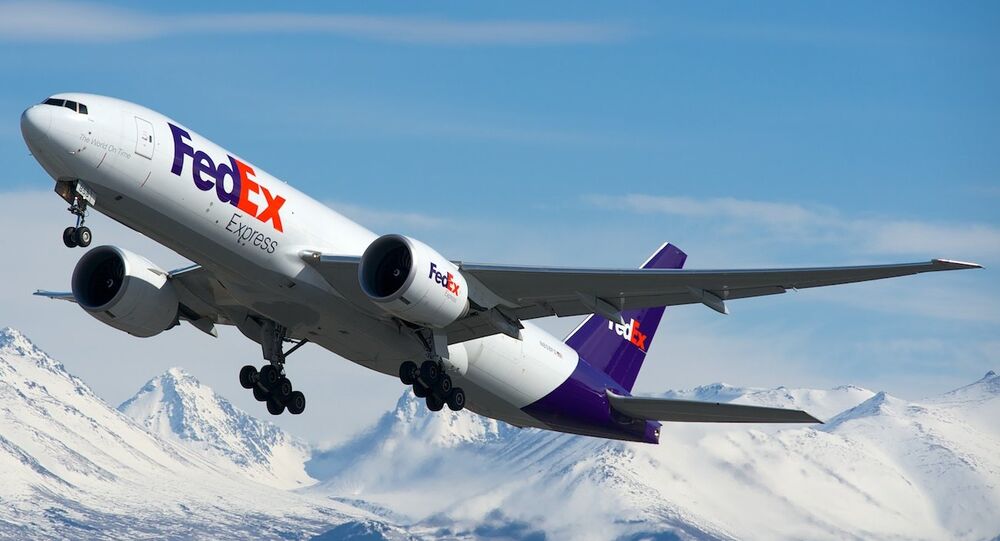 US-based shipping giant FedEx has apologized to Chinese phone maker Huawei for delivering two of its company packages intended for China to the US instead, and for almost redirecting two more. Experts warn FedEx’s loss of face will only further hurt the shipper, as global cargo companies suffer the effects of the Beijing-Washington trade war.

After two packages from Shenzhen-based Huawei's overseas offices containing urgent paperwork were redirected by FedEx to the United States, the tech giant has said it's reconsidering its relationship with the company. Critics have highlighted the double standard set by how the US media has reacted to FedEx's actions and how it treats Huawei, which was recently placed on a US Department of Commerce trade blacklist.

According to tracking records shown to the South China Morning Post by Huawei Technologies, two packages sent from Huawei's offices in Tokyo, Japan, on May 19 and May 20, to the company's offices in Guangzhou and Shanghai on the Chinese mainland were instead redirected to FedEx headquarters in the US. The packages arrived in Memphis, Tennessee, on May 23.

A second set of packages on May 21 were nearly diverted; those were coming from Huawei offices in Hanoi, Vietnam, and going to Singapore and Hong Kong, but FedEx instead returned them to their sender with a "delivery exception" message. It's unclear what that referred to, and FedEx hasn't elaborated, but it could mean any number of events that interrupt a package's delivery, including a holiday, a customs delay or a lack of recipient at the delivery site, according to the company's website.

The incident took place only days after Huawei was declared a "national security risk" by US President Donald Trump.

Huawei told Reuters the packages contained urgent and time-sensitive paperwork and "no technology."

While FedEx did attempt to contact Huawei's Hanoi offices about the delay and the packages' return, a Huawei representative told Reuters it only found out about the redirected shipments when it checked the tracking record online.

Huawei spokesperson Joe Kelly said on Tuesday that while the company had successfully intervened to stop the redirection of two packages, the incident nonetheless "undermines our confidence."

"We will now have to review our logistics and document delivery support requirements as a direct result of these incidents," Kelly told Reuters.

A post by FedEx on Chinese social media site Weibo on May 23 clearly aims at damage control, denying the packages were sent to the US. 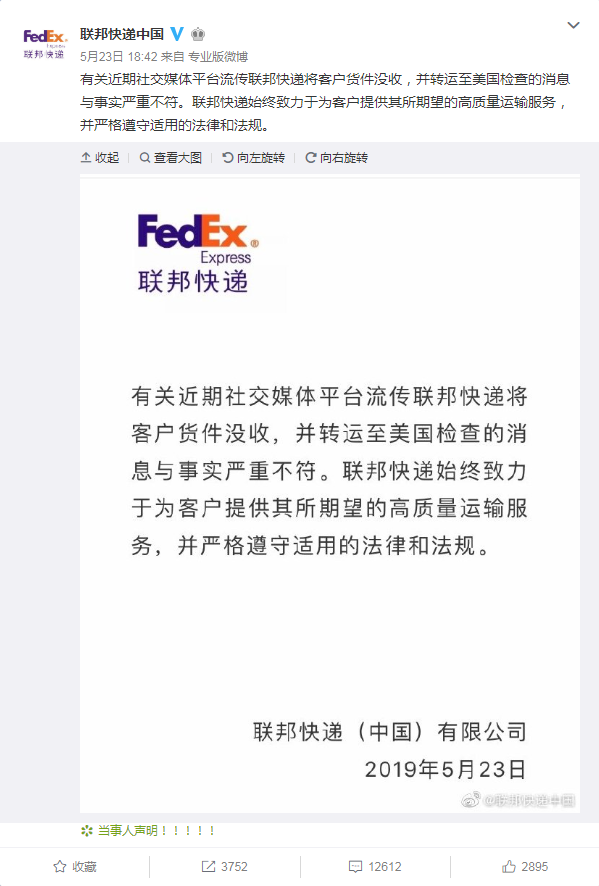 Sputnik image
FedEx's Weibo post on May 23, saying that “The news about the recent social media platform rumors that FedEx has confiscated customer shipments and shipped them to the United States is seriously inconsistent with the facts."

"The news about the recent social media platform rumors that FedEx has confiscated customer shipments and shipped them to the United States is seriously inconsistent with the facts. FedEx is committed to providing its customers with the high quality transportation services they expect and in strict compliance with applicable laws and regulations," the statement says, according to an online translator.

"This is an isolated issue limited to a very small number of packages," she said. "We are aware of all shipments at issue and are working directly with our customers to return the packages to their possession."

The company also issued an apology and posted the statement on its Weibo account Tuesday. 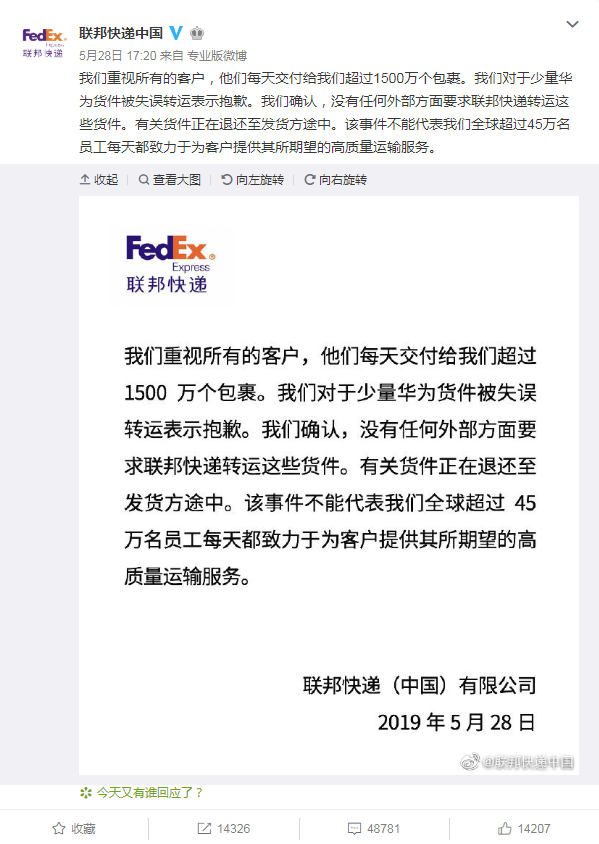 Sputnik image
FedEx's apology to Huawei, posted on Weibo on May 28

"We value all our customers who deliver more than 15 million packages per day," says the statement, according to an online translator. "We apologize for the mistransportation of a small number of Huawei shipments. We confirm that there are no external parties that require FedEx to ship these shipments. The shipment is being returned to the shipper. This event does not mean that our more than 450,000 employees worldwide are [not] committed to providing our customers with the high quality transportation services they expect every day."

Huawei is one of China's largest tech companies and the world's second-largest cellphone maker after the Korea-based Samsung. While the US government has recently tried to stymie Huawei's penetration of the US phone and high speed internet markets by citing security concerns with Huawei's devices, the company held onto its number two spot in the first quarter of 2019, according to a Tuesday report by research and advisory firm Gartner.

Huawei sold 58.4 million smartphones in the first three months of 2019, with its share of its two largest markets — Greater China and Europe — expanding.

By comparison, FedEx shares are down 28.6% in the last six months, according to Yahoo Finance, with global shipping showing only half the growth expected in the first quarter, Business Insider reported Friday. The publication attributed the slump to the US-China trade war, which has seen both countries steadily escalate trade penalties against imports from the other.

In March, CEO Fred Smith told investors the company was paring back earnings projections for the year, noting that "no markets will be able to absorb more than a fraction of what China produces." No doubt the debacle with Huawei will only push Chinese manufacturers away from using the company's services.

Shen Yi, Fudan University Cyberspace Governance Research Institute chief Shen Yi told the Global Times that "the incident has left the Chinese public and firms with no choice but to suspect that FedEx is connected with US intelligence agencies."

Likewise, Shao Zhonglin, former assistant secretary-general of the China Express Association, warned that FedEx's lack of transparency about what happened with Huawei's packages would only have a negative impact on the shipper's reputation in Asian countries.

The Chinese daily The Global Times, a hard-punching subsidiary of the Communist Party-run People's Daily group, opened a full broadside against FedEx on Tuesday, running three articles blasting the shipping company in no uncertain terms.

"FedEx's service is so shockingly bad that four parcels sent by one company from two different countries have been misrouted within a couple of days," the paper wrote. "Such an error rate could be fatal for a package delivery company."

The paper noted how differently the situation would be read if the roles of the companies were reversed.

"How would the US media react if the incident happened between a US high-tech company and a Chinese package delivery company? Not only the US media but also senators and even high-level officials would accuse the Chinese government of manipulating behind the curtain," the Global Times wrote. "Now the US media tolerates way too much of its country's irrational and illogical moves and even argues for their rationality."

The paper noted the information war waged by US media against Huawei hasn't been duplicated with FedEx's gross violations, citing a Saturday article in the Wall Street Journal that blasted the tech company's history as "littered with accusations of theft and dubious ethics," which it bases on "one-sided examples without basic objectivity."

Indeed, as of Tuesday afternoon, no major US paper has run a story on the FedEx blunder, not even Tennessee papers like the Tennessean, Knoxville News Sentinel or Commercial Appeal, based where the shipping giant's headquarters are located and two of the packages were sent. The UK-based Reuters, however, has two stories on the mishap.

Huawei Turns to Asian Parts Suppliers Amid US Crackdown