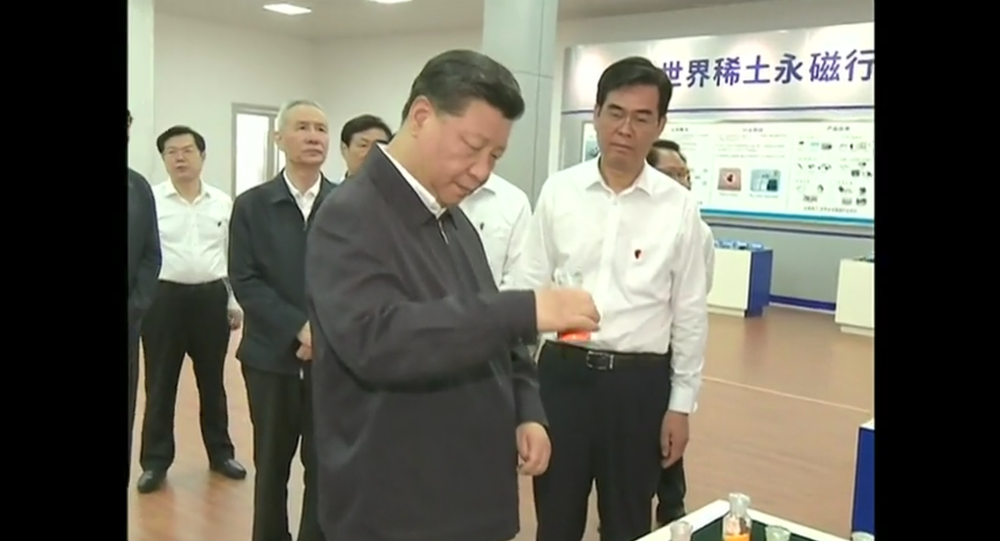 After Chinese President Xi Jinping visited a rare earth metal facility earlier this week, fears of a coming clamp-down on exports of the valuable materials have been renewed. China produces the vast majority of the world’s rare earths, which are used in electronic devices.

On Monday, Xi paid a visit to the JL MAG Rare-Earth Co Ltd facility in Jiangxi Province, where rare earth metals are both mined and processed into a useable form. Accompanied by Vice Premier Liu He, who has led the tense trade negotiations with Washington, Xi's visit instantly raised fears the world over that Beijing could use its leverage over the global supply of rare earth metals in a devastating counter-offensive in the burgeoning trade war.

Last December, Sputnik reported that China's ability to respond in-kind to US tariffs was limited, so Beijing might look to other tactics, such as easing fiscal and monetary policy so that the yuan's value falls, in order to weather the blow. However, rare earth metals could be a pressure point on the US economy that might bring Washington back to the negotiating table.

"China could shut down nearly every automobile, computer, smartphone and aircraft assembly line outside of China if they chose to embargo these materials," James Kennedy, president of ThREE Consulting, wrote on Tuesday in National Defense.

Amanda Lacaze, managing director and chief executive officer of the Australian rare earths mining company Lynas Corporation, told the New York Times in July 2018, "I think there's about 100 PhDs in rare earths working in applications inside China and working in technology development," but that to her knowledge, there are none outside of China.

Not everybody thinks it would turn out great for Beijing, though. Kokichiro Mio, a Chinese economy analyst at the NLI Research Institute in Tokyo, told AFP that restricting rare earths exports would "accelerate moves to find alternative supply sources."

Likewise, RBC Capital Markets warned, "Should China hike prices for the US or shut it out completely, it would simply speed up that process, leading to rapid development of alternative supplies." They cited Brazil, Vietnam, Russia, India and Australia as competitors that would benefit.

That said, stocks in 20 of the largest rare earth producers around the globe jumped on Monday by 6.4% — their biggest one-day gain since 2011 — following the news of Xi's visit to the Jianxi factory.

The MVIS Global Rare Earth/Strategic Minerals Index, which tracks the shares of 20 producers from 10 countries, recorded leaps on Monday and Tuesday in key stocks, including JL MAG Rare-Earth Co Ltd — whose site Xi poked around at — which recorded a 10% jump in value on Monday and a second 10% jump on Tuesday, Reuters noted.

Innuovo Technology Co Ltd, which produces permanent magnets, also jumped 10% Tuesday, with its stock having increased by 54.7% overall in May.

The 17 so-called "rare" earth metals aren't actually that rare at all — in fact, they're quite plentiful in Earth's crust. However, they're typically found in compounds fused with other metals, making their extraction and purification complex, expensive and dangerous.

Some of the most common uses for rare earth metals includes cathode ray tubes and flat panel display screens made from yttrium, cerium, lanthanum, europium and terbium; glass made from cerium, lanthanum and lutetium; and magnets made from dysprosium, gadolinium and praseodymium — especially permanent magnets made out of neodymium iron boron, which are used in every kind of electronic device from hard disc drives to sound systems, generators and turbines, the South China Morning Post reported. They're used in the defense industry to provide radio frequency circulators for Raytheon's Patriot missile system, and they're used to produce lasers, microwave equipment, superconductors, smartphones, computers and so much more.

Since the 1980s, China has dominated global output of rare earth metals, producing 120,000 tons of them in 2018, accounting for 71 percent of global output, according to US Geological Survey data.

The US uses about 20,000 tons of rare earth metals each year, Sputnik reported. China supplies 59% of the United States' consumption of rare earths, worth about $155 million in trade, according to the US International Trade Commission. The US' only working rare earths mine, in California, is now Chinese-owned and exports its raw material to China for processing.

Today, the center of rare earth mining and processing is in China's Inner Mongolia, Jiangxi, Shandong, Sichuan, Guangdong, Fujian, Hunan, Yunnan and Guangxi provinces, where 90% of the the world's mining occurs.

However, paradoxically, China is also a net importer of rare earths — that's because of the immense amount of manufacturing that takes place there, as well as Beijing's willingness to circumvent environmental regulations that cause much higher costs for refining processes elsewhere.

Last year, China imported 167% more rare earth oxides and oxide equivalents than in 2017 and 10 times more than in 2015, according to a March report by Adamas Intelligence, a consultancy that tracks the rare earths market.

The World Trade Organization has rebuked Beijing for restricting rare earths exports, saying in March 2014 that it violated global trade rules. The move followed a lengthy dispute based on a 2010 production curb, which Beijing justified by saying it was trying to curtail pollution and to preserve world resources.

"The sovereign right of a country over its natural resources does not allow it to control international markets or the global distribution of raw materials," the European Commission said at the time.