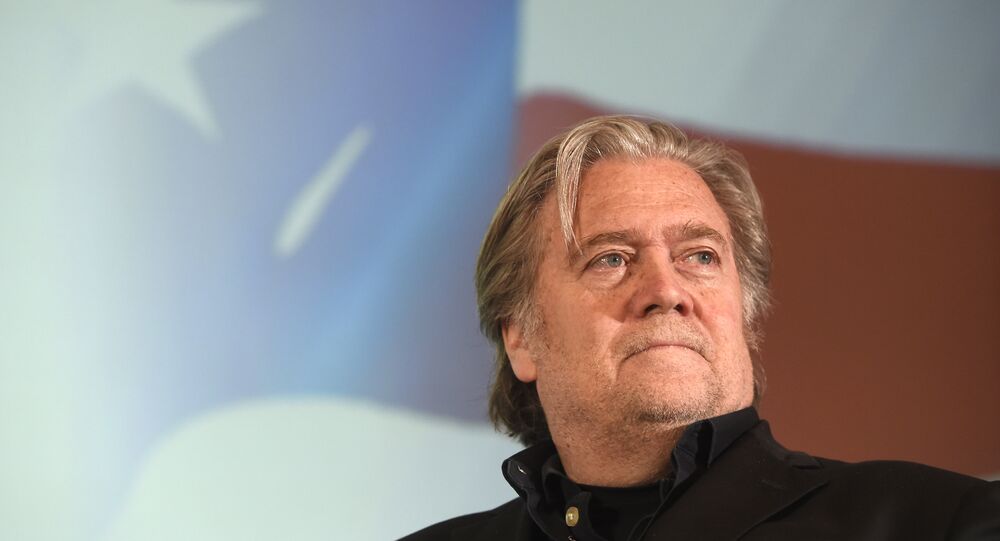 Late last week, a new twist occurred in the ongoing US-China trade spat, after Washington put Chinese telecom equipment maker Huawei on a so-called “entity list” along with 70 affiliates. The move effectively banned the Chinese firms from acquiring technology from American companies without the US government’s consent.

The expulsion of Huawei from the Western world is “10 times more important” than a delayed trade deal with China, former White House chief strategist Steve Bannon remarked in a phone interview with the South China Morning Post, adding that he would personally fully engage into driving out all Chinese businesses from American capital markets.

“It is a massive national security issue to the West”, Bannon said, proceeding to voice his endorsement of Trump’s move:

“The executive order is 10 times more important than walking away from the trade deal. It [Huawei] is a major national security threat, not just to the US but to the rest of the world. We are going to shut it down”, the former executive chairman of Breitbart News pointed out, without further dwelling on the security risks purportedly posed by Huawei’s products.

The remarks by Bannon, a strong advocate of an “all-encompassing” confrontation with China, came nearly a week after  POTUS Donald Trump put his signature on an order banning the telecom equipment giant Huawei from the US market and preventing it from collaborating with US components suppliers.

Earlier this week, Google cut off Huawei’s Android license in keeping with the US Commerce Department’s decision to place the Chinese tech giant on its entity blacklist, as well as barred Huawei’s brand-new devices from using the video hosting website YouTube and Maps app. Some Birtish and American comopanies, including Microsoft, follwoed suit, also citing the US' executive order as the reason for the moves.

Washington has recently been alleging that Huawei is spying on its users worldwide upon a directive from the Chinese government, which the company vehemently denies. The firm's Vice President for Western Europe Tim Watkins told BBC around the time of the ban that there is no “obligation on Huawei’s part to cooperate with the government in the way in which the Americans are indicating”. He stressed that no request to this end had even been made, adding that the code used in their products was absolutely safe.

Washington has been decisively pressing its allies to ban Huawei from their wireless networks.  While New Zealand and Australia have already done so with regard to the development of their 5G networks, others, including the UK, India, and the United Arab Emirates have shown reluctance to follow suit.

A number of European countries, including Germany, Switzerland, Italy, and France have so far also questioned Washington’s hard-line stance on the Chinese tech titan amid an ongoing trade spat that has already seen several rounds of mutual duties exchanged between the two countries.