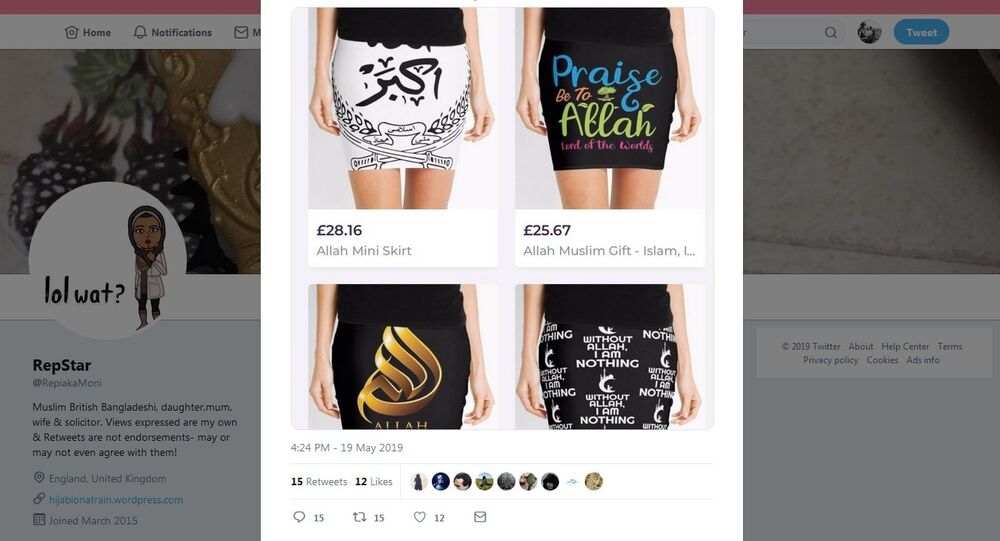 The Melbourne-founded marketplace for print-on-demand products was earlier called out for selling clothing items with images of the Auschwitz death camp - and this new choice of “art” featured on consumer products has certainly also not been to everyone’s liking.

An online retailer has pulled miniskirts with the word “Allah” emblazoned on them after having met a storm of strong reactions online.

The fashion website Redbubble collaborates with a wide array of artists, allowing them to upload and trade their individual designs printed on a range of consumer products.

The company had been selling above-the-knee skirts with a price tag varying from £25 to £28 and sporting such phrases such as “Praise be to Allah” and “without Allah I am nothing”, to the outrage of numerous clients, branding the approach “point blank inappropriate”.

"Has anyone seen this; Allah mini skirts!" one indignant Twitterian wrote, alongside a screenshot of the products in question. "What on earth @redbubble this is highly offensive and incredibly stupid on your part".

Many more expressed a similar stance, requesting that the site remove the skirts from their catalogue:

@redbubble there are posts circulating about Islamic art on mini skirts. Can you please have these removed? https://t.co/yAXCcv2WJJ

Wth is this? How are you allowing the sale of this stuff on your site? #Islamophobia will be reporting to @TellMamaUK You need to take this down immediately https://t.co/cryeQ8HzI7 it’s defaming to the religion of Islam FYI #hate

What on Earth is this? https://t.co/U1iYaWfgyN

"The items of clothing being sold on Redbubble include religious text and iconography that is sacred to many faiths”, said Iman Atta OBE, director Faith Matters at TellMama UK, a watchdog that monitors and measures anti-Muslim incidents in the United Kingdom.

"Whilst we believe in free markets and the opportunity for people to trade and market what they want, all we ask is that traders reflect on these items which may be inflammatory to communities”, the watchdog’s representative concluded.

The online retailer promptly responded to the online fury with a tweet telling shoppers that the content printed on their products was “not in line with their Community Guidelines” and promised it would take down the goods without delay.

We appreciate that this has been brought to our attention. The nature of this content is not acceptable and is not in line with our Community Guidelines (https://t.co/i9QomriweX). We are taking immediate action to remove these and similar works available on these product types

Redbubble is, however, not new to such controversies, as earlier this month one person took offence at their selling a number of  skirts featuring the word “Sikh” on them, arguing unequivocally that the items “shame and hurt Sikhs”.

Separately, Redbubble was criticised around the same time for selling an even wider assortment of goods, namely skirts and pillows featuring images of the notorious former Nazi concentration camp Auschwitz.

These were subsequently branded as “disturbing” by camp museum officials, as well as the general public. Redbubble responded by agreeing that the items were “not acceptable” and vowed to take “immediate action” vis-à-vis the controversial items and their placement on the website.