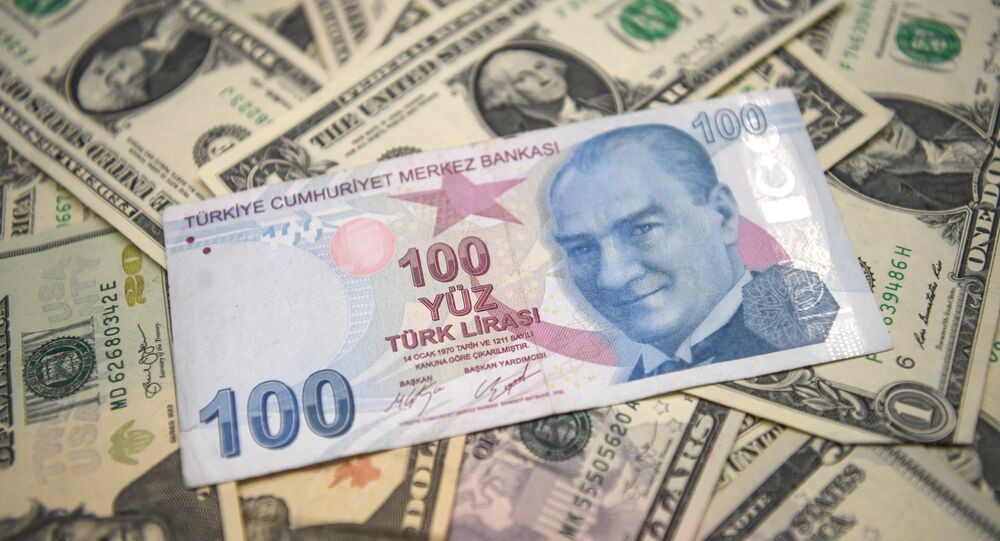 Turkey has announced a new set of measures to support economic activity and prevent a further devaluation of the national currency as the nation is set to re-emerge from recession as soon as this quarter.

© AP Photo / Lefteris Pitarakis
Turkey's Banks Sell $4.5 Bln to Support Currency Amid Political Turmoil
The Turkish central bank has reduced its base interest rates to 24 percent after hiking it to as high as 25.5 percent roughly two weeks ago. The central bank offered lira liquidity at the new rate through the repo auction Tuesday, seeking to support domestic lending and business activity as Ankara is struggling to put the ailing economy back on track.

Experts believe President Tayyip Erdogan could boost economic growth and end the recession in the coming months, but this rebound might be followed by a new round of contraction either in late 2019 or early next year.

"I think that in the second quarter, political uncertainty and financial market volatility will weigh again", Inan Demir of Tokyo-based Nomura Holdings said. "It might be a sort of double-dip in economic activity".

Economists believe looser monetary policies could add downward pressure on the lira, which has been in turmoil since the emerging markets currency crisis last summer. However, Turkey faces a dilemma — tighter central bank policies could exacerbate the ongoing recession, while more accommodative policies could put the lira at a greater risk.

"The pace of domestic economic activity may argue for easier monetary conditions but clearly the FX market stress is too big to allow that", Demir said.

© AFP 2020 / OZAN KOSE
Concerns Rise Over Turkey's Foreign Reserves Amid Lira's Devaluation
The Turkish government has introduced a set of measures to boost economic activity in the country, which includes calls on banks to wait at least one day before paying of large-scale foreign currency purchases. Additionally, Turkish financial enterprises were asked to buy governmental bonds — which could provide additional resources for the authorities to enhance fiscal stimulus measures.

However, the authorities' attempts to balance the risks of either a deeper recession or steeper lira devaluation have sent confusing signals to the market. Some economists fear Ankara might not be able to effectively manage the double-pronged challenge.

"At the time when Turkey needs to restore confidence in the lira among households, corporates and foreign investors, contradicting measures have been announced", Piotr Matys of Rabobank in London said. "Such conflicting measures make Turkey increasingly unpredictable to foreign investors who will remain reluctant to deploy their capital despite an attractive valuation of Turkish assets".

Meanwhile, GDP growth figures for the first quarter, due to be released in late May, are expected to show Turkey re-emerge from the recession. A weaker lira has improved international competitiveness of Turkish exports, while elevated levels of budget spending over the past few months have supported consumer confidence and household spending despite the rising costs of imports.

However, fiscal stimulus measures are expected to wrap up later this year, while commercial banks are likely to return to their usual business practices after the central bank removes its emergency guidelines.

In this light, the lira's devaluation could continue, with its effects on the GDP growth rate in the near-to-medium-term being unclear.

"Any further lira weakness will likely have a contractionary impact on activity through reduced corporate profits and the negative impact of a weaker lira on business and consumer sentiment", said Ugras Ulku of the Institute of International Finance in Washington, DC.

As the first step on the path of reform, Turkey's Finance Ministry is considering pumping $4.7 billion into the nation's state-owned banks to address NPLs in the energy and construction sectors. This deleveraging effort is expected to improve sustainability of the Turkish economy going forward.