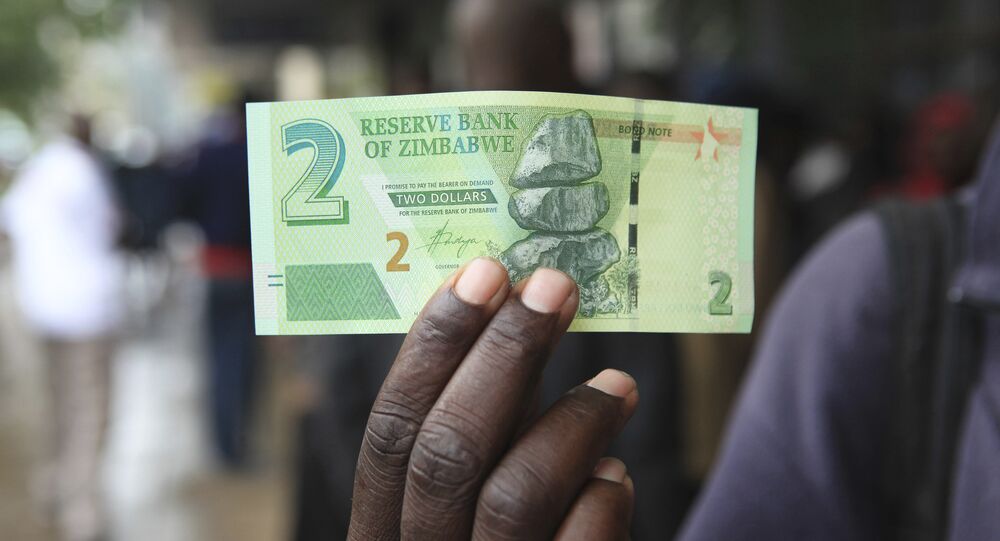 The new government of Zimbabwe is attempting to improve public finances and get the nation's economy working again, but its efforts to tackle hyperinflation, attract investment and crackdown on corruption appear to have proven insufficient so far.

Kristian Rouz — Zimbabwe, once a prosperous agricultural economy in the southern subregion of the African continent, finds itself in an economic free fall, the latest data shows. The ongoing currency crisis, uncertainty over property rights, and corruption continue to pose a problem, as the nation is seeking to re-emerge from decades of economic mismanagement.

© AP Photo / Tsvangirayi Mukwazhi
US Sanctions on Zimbabwe Illegal, Will Curtail Multinational Payment Support - Ruling Party
Zimbabwe's new government of President Emmerson Mnangagwa that came to power after the ouster of notorious former leader Robert Mugabe in 2017, is seeking to implement long-overdue reforms, including a full overhaul of the Zimbabwean currency system.

However, while planning is underway, the nation's economy continues to shrink due to a lack of investment, meagre business activity, and an ongoing fall in mining and agricultural output.

In this light, some experts say the Zimbabwean economy is 'officially pronounced dead', as the latest macroeconomic data and the government's proposed reform suggest a positive change anytime soon is unlikely.

"Our economy is now dysfunctional and literally dead. We have a real crisis in this country," Tinashe Eric Muzamhindo of the Women's University of Africa in Zimbabwe said. "We are experiencing so many problems such as fuel, prices are skyrocketing, corruption etc. To be quite honest corruption has destroyed this country".

Zimbabwe's GDP, however, rose 4 percent last year, but the nation's inflation rate accelerated from 20.85 percent in October 2018 to 75.86 percent last month, according to official reports.

Meanwhile, according to Zimbabwe's Treasury, the economy is set to actually contract by 20 percent in dollar terms this year — as out-of-control inflation is threatening to erase the gains made by remaining functioning sectors.

Mnangagwa's cabinet said it will 'rebase' Zimbabwe's economy after adopting the new currency earlier this year. The nation's central bank abandoned the currency bond and electronic peg to the US dollar back in February, instead opting to merge the two into a new currency, known as the RTGS dollar.

The move boosted Zimbabwe's nominal GDP by 40 percent, to $25.8 bln. But economists warn this number doesn't reflect the changes in effective economic output, or business and consumer activity, which remain subdued.

By 'rebasing' the economy, the Zimbabwean government means changing the methodology of how it calculates the nation's GDP growth rate. However, challenges to real economic growth remain, and it's still unclear how Mnangagwa plans to address issues that include stagnant and devaluating salaries and wages, the ongoing hyperinflation, and a possible shortage of basic goods.

"We are experiencing severe fuel shortages, and our major problem is industry is dead, our production levels are weak, the level of exports is very low, and we are relying on imports", Muzamhindo said.

© REUTERS / Philimon Bulawayo
US Urges National Dialogue in Zimbabwe Mediated by Neutral Third Party - State Department
For his part, Zimbabwean Finance Minister Mthuli Ncube claimed in his recent address to Parliament that the nation's economy grew 6.2 percent in 2018. He said austerity measures adopted last year would produce a budget surplus of RTGS$443 mln (1 US Dollar converts into 3.3-7 RTGS Dollars depending on the interbank exchange rate).

Ncube also said Zimbabwe's budget deficit would hit its 5 percent target this year, adding that the recent introduction of a 2 percent transfer tax would help achieve the goal of improving Zimbabwe's public finances.

"The government is pushing people further into poverty. We are not aware of any government measures to provide even minimal safety nets for those who are already living on an economic cliff-edge and who will suffer the most from these regressive policies", the UN report read.

The Zimbabwean government's plans to tackle corruption and poor investment climate remain unclear, while recent reforms appear to have proven insufficient to get the nation's economy back on track.