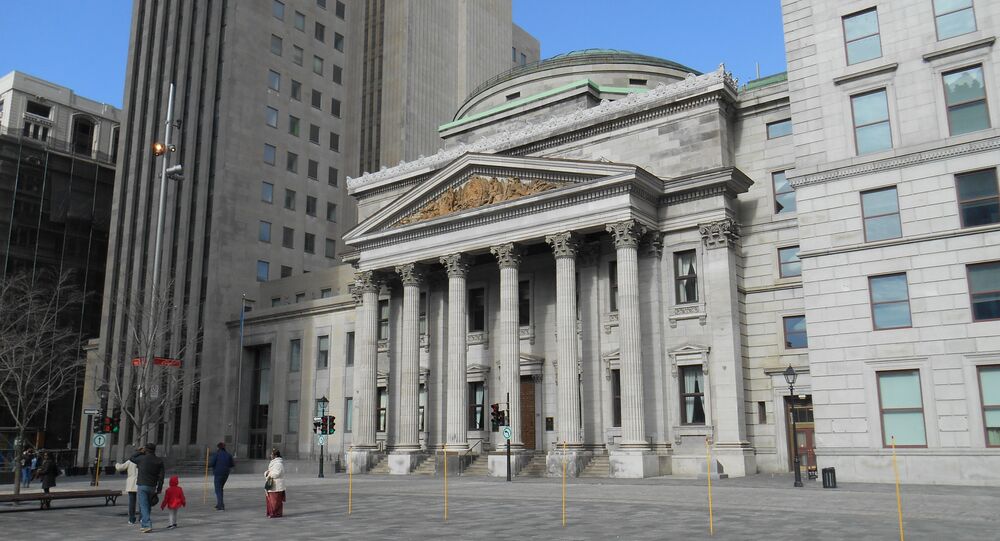 Canada has seen a massive rise in gainful employment amid the declining jobless rate and rising wages, all of which are set to contribute to higher consumer confidence and spending, and boost business activity in the manufacturing and services sectors this year.

Kristian Rouz — The Canadian economy posts the highest number of new jobs on record, reflecting broader improvements in investor and business confidence, and pointing to a possible acceleration in GDP growth. The numbers come amid rising energy exports, solid factory output, and an ongoing expansion in the services sector.

© AP Photo / Jason Lee
China Suspends Pork Imports from Two Canadian Companies - Agriculture Minister
According to Statistics Canada, the nation's employers added 106,500 jobs in April, the greatest one-month increase in employment since 1976, when the government started to record such data. The majority of these new jobs are full-time.

Canada's unemployment rate dropped to 5.7 percent in April, in line with the rise in job-creation, compared to a 5.8 percent jobless rate the previous month. A separate measure of gainful employment added 0.6 percent, the highest such jump since 1994.

Additionally, Canada's growth in salaries and wages rose at its quickest pace since the summer of 2018, boosting effective disposable household incomes. This, in turn, is expected to translate into higher consumer confidence and spending numbers in the current quarter.

"As much as I try to poke holes in these numbers, I can't," Derek Holt of Toronto-based Scotiabank said. "You've got sector breadth, you've got regional breadth, the four biggest provinces are up."

READ MORE: Canada Caves to US Pressure on F-35, Stands to Lose $14 Bln in Benefits — Report

In currency markets, the Canadian dollar, known as the loonie, rose 0.7 percent against a basket of its major peers, while yields on two-year Canadian government bonds rose 0.04 percent to 1.62 percent. These figures reflect improved investor confidence in the Canadian economy in the wake of the jobs report, which is poised to drive the influx of capital and GDP growth as well.

Meanwhile, economists have warned that Canada is facing the risk of a recession despite the positive labour market dynamics. The new North American trade agreement, known as the USMCA, has yet to be ratified and go into effect; in the meantime, US tariffs on Canadian industrial metals have yet to be lifted.

Additionally, the volatility in international oil prices, higher borrowing costs, a slowdown and higher prices in the housing market could all contribute to a slowdown in Canada's GDP expansion.

However, the strong labour market could boost consumer demand and the nation's services sector, which could prevent a recession. Canadian wages rose 2.5 percent year-on-year in April, the quickest gain since last September, while total hours worked also increased by 1.3 percent — despite the lingering softness in labour productivity.

"It seems like there's a little more strength left in the Canadian economy," Brian DePratto of Toronto Dominion Bank said.

"We're drawing in people, and that tells you how tight the labour market is,'' Tony Stillo of Oxford Economics said.

© AP Photo / Carolyn Kaster
Trump Tells Trudeau US Backs Ottawa’s Effort to Free Canadians From China - White House
The Canadian economy is poised for a steady pace of expansion this year, most economists agree, saying the rising oil exports to the US through the Keystone XL pipeline, aided by the elevated energy prices, would drive the expansion. Additionally, when the USMCA finally kicks in, Canada is expected to ramp up exports of manufactured goods to both the US and Mexico — despite imports being expected to surge as well.

Another key development for Canada this year could be Brexit, as the UK is set to actively seek trade deals outside the EU, likely turning its sight to its Commonwealth partners and other former colonies. This could contribute to an increase in trade between Australia, New Zealand, Canada, and even South Africa,as well as many other countries, with the UK's mediation.