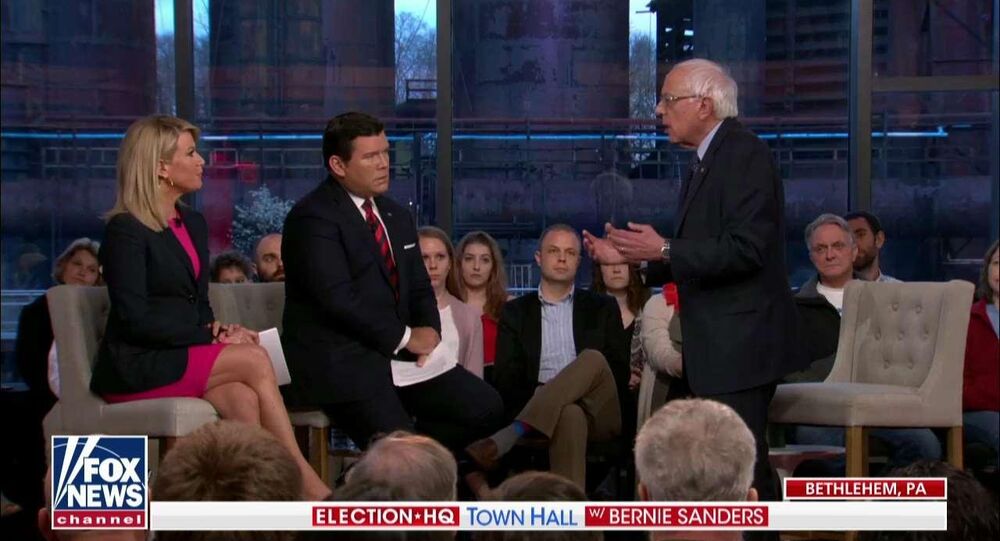 US President Donald Trump appears to be experiencing something of a lover’s tiff, as Fox News increasingly calls the leader out for fringe opinions and factual errors.

© AP Photo / Susan Walsh AP file
Warren Calls for House to Begin Impeachment Proceedings Against Trump
Trump, according to reports, is claiming that actors operating deep within Fox News have switched sides and are aligned against him, according to a new report from Politico.

After twice tweeting his complaints following a highly-anticipated Bernie Sanders Town Hall program on Fox, the president accused the network of stocking a pro-Sanders audience managed by news anchors that were too polite to the Democratic firebrand, currently a front-runner in the upcoming US 2020 presidential elections.

The president's recent tirade against the network indicates that the cosy relationship with the network may be more than just on the rocks, according to Politico.com.

"Not surprisingly, @BretBaier and the ‘audience' was so smiley and nice. Very strange," Trump mused.

The US president also questioned the hiring of former Democratic National Committee interim chairwoman Donna Brazile as a Fox News political analyst, while accusing the network of packing the Sanders Town Hall with enthusiastic supporters of the Vermont Senator.

A spokesperson for Fox News denied that attendees to the high-ratings Bernie Sanders event were skewed toward the independent candidate's supporters, even as Trump fans were allegedly forced to stand outside, according to Politico.

© Sputnik
Mueller Report Reveals Trump's Lies And Deception, But Not Collusion
Former White House staffers suggest that due primarily to unquestioning support for the president's policies and behaviours, particularly at the hands of Fox anchor personalities Laura Ingraham, Sean Hannity and Tucker Carlson, Trump has become highly sensitive to critique of any kind, according to Politico.

White House press secretary Sarah Sanders stated, "We expect all of the news to be fair and accurate and not trying to drive the liberal agenda," according to an interview with Politico.

While Trump has been known to favour only supportive news anchors with interviews — talking one-on-one with Hannity eight times, more than every other network combined — other anchors have shown their willingness to let the president speak his mind.

"We'd love to have you on a town hall soon — or even an interview on @SpecialReport — it's been awhile," Baier tweeted after Trump complained on Tuesday about Fox.