South Africa's economic growth remains sluggish ahead of the 8 May elections, with many households struggling to cope due to their shrinking purchasing power amid elevated levels of inflation, poor wage growth and rampant unemployment.

Kristian Rouz — South Africa is facing accelerating inflation, tepid retail sales, and disruptions in national infrastructure just weeks ahead of general elections on 8 May. While disgruntled voters might end up voting against the ruling party African National Congress (ANC), political change might be not enough to fix the Rainbow nation's ailing economy.

© CC0
S Africa's Heroin Crisis Taking Toll on Economic Growth – Reports
According to a statement from the South African Reserve Bank (SARB), the nation's inflation rate is expected to overshoot the regulator's target of 4.5 per cent until at least 2021. At this point, some reports suggest inflation could be running closer to 6 per cent.

Volatility in the FX rate of South Africa's national currency, the rand, has put upward pressure on the prices of imported goods over the past few months, meaning the Rainbow nation's households are facing mounting challenges related to their effective purchasing power.

Statistics show inflation accelerated from 4.1 per cent to the SARB median target of 4.5 per cent in February, but central bankers are sceptical. The SARB's broader inflation target is the 3-6 per cent bracket.

"The South African Reserve Bank is not comfortable with expectations close to 6 percent," the Pretoria, Gauteng-based regulator said in its Monetary Policy Review on Wednesday. It is "too early to claim that inflation is already permanently lower," SARB policymakers added.

However, the rand has strengthened 2.3 per cent against the dollar this year so far, suggesting imports prices could have gone down. But, according to the SARB, they didn't — reflecting the structural issues and rampant corruption plaguing the once-most prosperous economy on the African continent.

A separate report from the South African government found retail sales in the country went up just 1.1 per cent in February compared to the 1.2-per cent growth in the previous month. The slowdown is attributed to the shrinking disposable incomes of South African households amid the rife near-30-per cent unemployment.

Experts believe the pace of growth in retail is insufficient to provide any meaningful support to the broader GDP growth this year so far.

"Data across the economy were very poor when measured at the quarter-on-quarter rate that aligns with official gross domestic product," London-based research firm Capital Economics said. "We think conditions will pick up later this year, but risks to our 1.5 percent 2019 growth forecast are weighted to the downside."

This comes as, according the Statistics South Africa, petrol prices rose a hefty 7.7 per cent in March in the province of Gauteng alone, extending gains in April with a massive 11.4-per cent rise so far. Officials say gas prices could go even higher in May due to increasing international oil prices, as well as South Africa's inefficient and insufficient refining capacity. 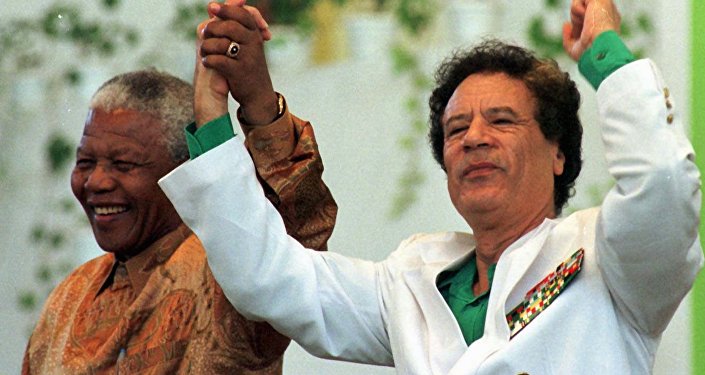 Prof. on 'Libyan Cash' Scandal: Gaddafi Ties to South Africa Go Back to Mandela
The SARB, for its part, is holding base interest rates steady at 6.75 per cent. Policymakers are facing a complex dilemma — cutting rates to boost GDP growth would spur inflation, while tightening rates to curb inflation could stifle economic growth.

This comes as South Africa is balancing on the verge of a recession and 'junk' international credit ratings, with the outlook on both hardly encouraging.

"That's worrying. Consumer spending is struggling to pick up and we see that continuing throughout the year," Johannes Khosa of one of South Africa's largest banks, Nedbank, said.

Amid the mounting economic gloom, the majority of South Africans are set to head to polls — after years of hard work in conditions of rife unemployment, poor wage growth, and devaluation of the national currency.

"South Africa's state performance peaked in 2007, that year its economy and governance were at their best. Since then the state has experienced continuous decline in all core indicators of performance," Johannesburg-based development advisory Eunomix Business & Economics Ltd. said in a recent study.

The opposition Democratic Alliance (DA) has promised change, a better economy, and a war on corruption, but it remains unclear whether the centre-right party will be able to expand its influence outside the Rainbow nation's metropolitan areas.

The ANC remains firmly entrenched in remote rural regions, but its main base of support is in the impoverished suburban communities, where left-wing ideologies are still popular — despite the current economic despair after the ANC's 25 years in power.