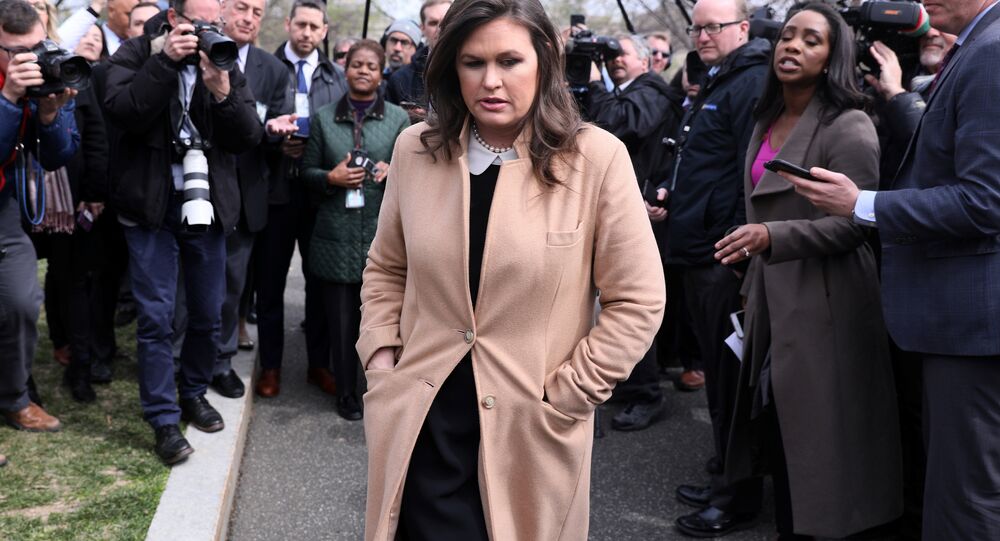 The top White House spokesperson took an unusual stance in defense of her boss on Sunday by suggesting that DC officials are not intelligent enough to understand the president’s tax returns.

© AP Photo / Elaine Thompson
Grab the Popcorn: US Gov’t Committee Gives Trump Until April 23 to Release Taxes
Speaking to a media outlet on Sunday, the White House press secretary, Sarah Sanders, opined that the lawmakers on Capitol Hill seeking US President Donald Trump's tax returns were not "smart enough" to "look through the decades of success" of the increasingly-embattled leader, according to the Daily Beast.

Speaking to Fox News, Trump appointee Sanders remarked that members of the US House of Representatives and the US Senate "weren't smart enough" to sift through the president's business deals, including the many Trump bankruptcies, foreclosures and other well-documented commercial failures.

"This is a dangerous, dangerous road," Sanders declared, adding, "I don't think Congress, particularly not this group of congressmen and women, are smart enough to look through the thousands of pages that I would assume that President Trump's taxes will be," cited by The Washington Examiner.

"My guess," Sanders offered, "is most of them don't do their own taxes and I certainly don't trust them to look through the decades of success that the president has and determine anything," cited by Rawstory.com.

Much of the Sanders commentary during the interview centered on a new April 23 deadline that the US Committee on Ways and Means — the oldest US lawmaker committee, dating from 1789 — slapped on the Internal Revenue Service (IRS) to hand over Trump's business and personal tax returns, according to Thedailybeast.com.

The IRS is currently headed by Trump appointee Charles Rettig, who was sworn in October 2018.