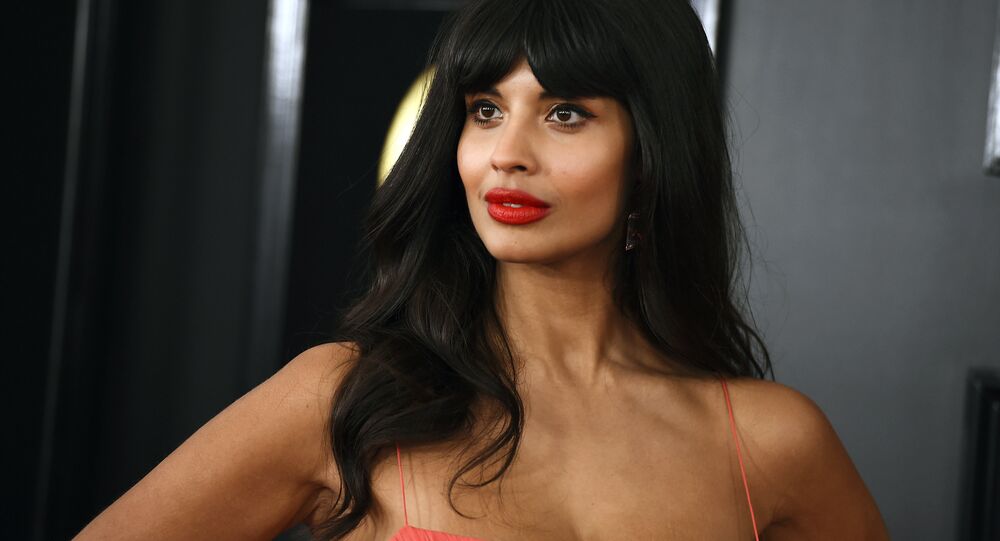 Jameela Jamil has recently kicked off a body-positive company named “I Weigh” to encourage the general public to treat whatever physique they have with affection, and hence lashing out at those who can’t resist the temptation to hawk slimming products with a cynical disregard for their adverse side effects.

Presenter-turned actress Jameela Jamil has hit out at the Kardashians once again for promoting weight loss products, like the so-called diet shakes and appetite suppressing lollipops, on their official Instagram accounts.

Referring to the side effects of the promoted pills, drinks, and etc.,  the Good Place star stated explicitly that the famed family’s pockets are “lined with the blood and diarrhoea of teenage girls”, fully in line with her latest body positivity-focused mission to encourage people to love their bodies. “Fat-phobia is real, it is pervasive and prevalent and is damaging the mental health of millions”, she said while promoting her new company, dubbed “I Weigh”. Referring to what she sees as the Kardashians’ overwhelming itch to make money, she tweeted:

Their pockets are lined with the blood and diarrhea of teenage girls…🤑 https://t.co/nw0Dw94kd0

"Essentially, f**k the young, impressionable people, or those struggling with eating disorders, we want the money”. She further stated that she had been offered money for “flogging this stuff”, adding that “she doesn’t do it”, thereby stressing the Kardashians have not been forced to do so, either.

In response to one fan’s rhetoric that the celebrity family should not be held responsible for the products their fans splash out money on, Jameela struck back:

“Yeah DUMB teenage girls with eating disorders. Be smarter. This is your fault little girls. Shame on YOU not the grown billionaire adults preying on your insecurity and fear”, she wrote with apparent sarcasm.

Speculation ran high in the comment section on Twitter, with people either applauding Jameela’s move to call the bluff of the Kardashians, or, conversely, wondering why on Earth the celebs should worry about the crowd of theis fans’ decisions. Those who once rose to the bait were also among those who had their say on the matter:

I just want to say that the world would be such a better place if everyone (especially those in positions of power & privilege) were like you! Thank you for spreading positivity in such a toxic time for women & girls❤️🥰👏🏻

ugh i love you for speaking up on this when i was younger i fell for the same tactics that sold “healthy natural diet pills” and it fucked me up. i’m so happy you’re around to educate young people and check greedy assholes profiting off of insecurities and mental illness

You are exactly right. Thank you for being a voice.

Thank you truly thank you. Many many young people are so appreciative that you using your platform to highlight what is clearly happening within the dieting culture and the promotion of products by celebs that they don’t use and products that are harmful to young people.

It's not "negative energy" when you're rightly challenging the damaging influence of celebs promoting dangerous products they probably don't even use. It's calling them to account. And regardless of the money they make, they're culpable for what they advertise & the effect of has

Some even suggested that Jameela is “giving the Kardashians too much” credit, which they don’t actually deserve, whereas one user assumed that cricitism of the Kardashians only plays into their hands:

They thrive on controversy, so calling them out only increases their influence, but they're dangerous enough to not be ignored… It's a real paradox. They're banned in my house, my kids know how evil a corporate shill is, that's all I can do:p

There were, however, those who attempted to rise in celebs’ defence:

Many commented by saying that celebrities differ, and one should pick as examples those that have something more than slim bodies  to flaunt:

Absolutely 100% right. If you’re going to follow “famous” people, at least pick some with something more valuable to offer the world than naked pics, plastic surgery, and endless self objectification.

The Kardashians are not the only celebs the actress has famously called out: she earlier targeted Britney Spears' sister, Jamie-Lynn Spears, after she had been seen flogging some tea that allegedly put her “back on track” after she indulged in some junk food, “a slice or two of pizza”. Jameela instantly weighed in saying that Spears’ post brought “a bulimic rhetoric” to the fore.

No More App to Keep up With Kardashians