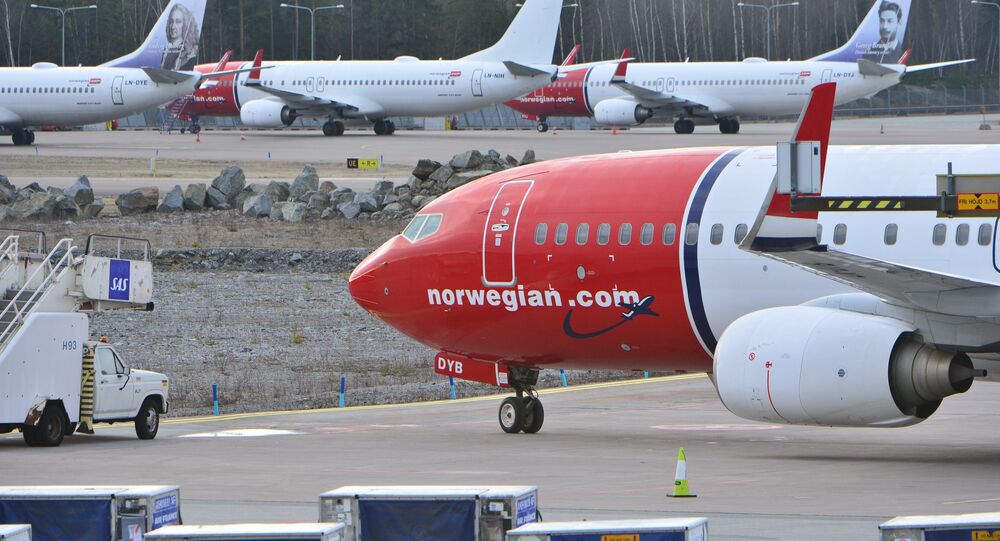 Following two air crashes in Ethiopia and Indonesia, in which about 350 people lost their lives, Norway's leading airline previously decided to keep its fleet of Boeing 737 MAX grounded and is taking emergency actions to minimise the cost.

The low-cost Norwegian airline has postponed the potential sale of six Boeing 737-800 aircraft, which were grounded following the crash involving aircraft of the same model in Ethopia earlier this month, the company said in a statement.

At the same time, Norwegian prepares a so-called "wet lease", in which aircraft are provided with complete crew, maintenance, and insurance, to remedy its traffic needs.

Also, Norwegian will continue to redeploy aircraft in its own fleet to keep the number of cancellations as low as possible and plug the capacity gap. Passengers affected by the ban will be moved to new flights, but are not entitled to standard EU compensation, the company said.

Norwegian's fleet mostly consists of Boeing aircraft. The airline also has about 110 Boeing 737-800 aircraft, which are not affected by the temporary ban, and intends to use the available capacity of the Boeing 787 Dreamliner fleet.

It has been estimated that if Norwegian were to replace all of its Boeing 737 MAX aircraft, this would mean a monthly bill of NOK 38.5 million ($4.5 million), just in rent. The Norwegian company pledged to demand compensation from Boeing for the additional costs incurred.

Earlier this month, a crash involving a Boeing 737 MAX 8 with 157 people on board operated by Ethiopian Airlines prompted a string of bans of the model by airlines and regulators across the world. About two-thirds of the 371 MAX jets operating across the world were suspended. Boeing, in contrast, stated the company had "full confidence" in the model.

Despite the fact that only 18 of Norwegian's 163-strong fleet are 737 MAX, the grounding of the aircraft was estimated be costing the company NOK 15 million ($1.7 million) a day. All the worse, it comes at a time of major challenges for Norway's leading airline, the Nettavisen newspaper reported.

Meanwhile, a three-month grounding of all 737 MAX planes could cost Boeing up to $5 billion, according to estimates from Wall Street firms Melius Research and Jefferies.

Norwegian is the largest airline in Scandinavia, and is Europe's largest low-cost carrier behind only Easy Jet and Ryanair, as well as ninth-largest in the world.