Earlier, Germany, a strong supporter of the Nord Stream 2, secured extending internal EU market regulations to pipelines to and from non-EU countries running through Europe, which includes the project, after reaching a compromise with France on the matter.

The European Parliament has adopted a resolution, calling for stopping the Nord Stream 2 project, with the document being backed by 402 lawmakers. A total of 163 members of parliament voted against the resolution, while 83 MEPs abstained.

The resolution, which is unbinding and was introduced by a Latvian MP in March, also urges to impose new sanctions on Russia and limit Moscow's access to finances and technologies, as well as to not consider the country a strategic partner.

As written in the text of the document, the Nord Stream 2 project allegedly boosts EU's dependence on Russian gas supplies and threatens the bloc's energy policy and its "strategic interests."

However, it is up to the European Union authorities to adopt further economic restrictions, including individual sanctions and access to tech.

The adoption of the resolution comes just weeks after EU member states' ambassadors endorsed the provisional agreement between representatives of the Council of the European Union and the European Parliament on compromise amendments to the EU gas directive, which envisions extending internal EU market regulations to pipelines to and from non-EU countries running through Europe. This would include Nord Stream 2, which will carry gas from Russia via the Baltic Sea and a hub in Germany. 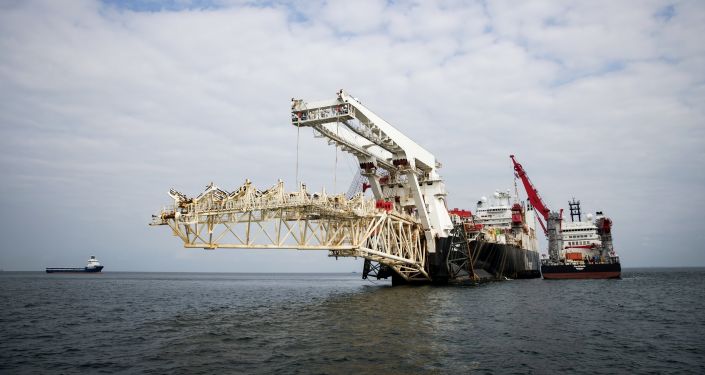 Nord Stream 2
US Pressing Its Own Interests in Europe When Issuing Threats Over Nord Stream 2 - Bavaria Minister
While the European Commission expects Gas Directive amendments to enter force before the completion of the Nord Stream 2 pipeline, the compromise on the matter was reached by Berlin and Paris, which had announced earlier that it would back the previously proposed regulation over its possible risks to the project.

Separately, the US has repeatedly been voicing opposition to the Russian pipeline to Europe, with President Donald Trump urging the bloc member states, particularly, Germany, to buy American LNG instead. In turn, Berlin has repeatedly emphasised that it supports the project and rejected the claim that the pipeline is a threat to the European energy security.

© Sputnik / Sergey Guneev
US' 'Hardball Tactics' on Nord Stream 2 Alarm Merkel - Report
Moscow has slammed Washington's pressure on the EU over the matter and accused the White House of unfair competition for the European gas market, while stressing that the project is purely economic.