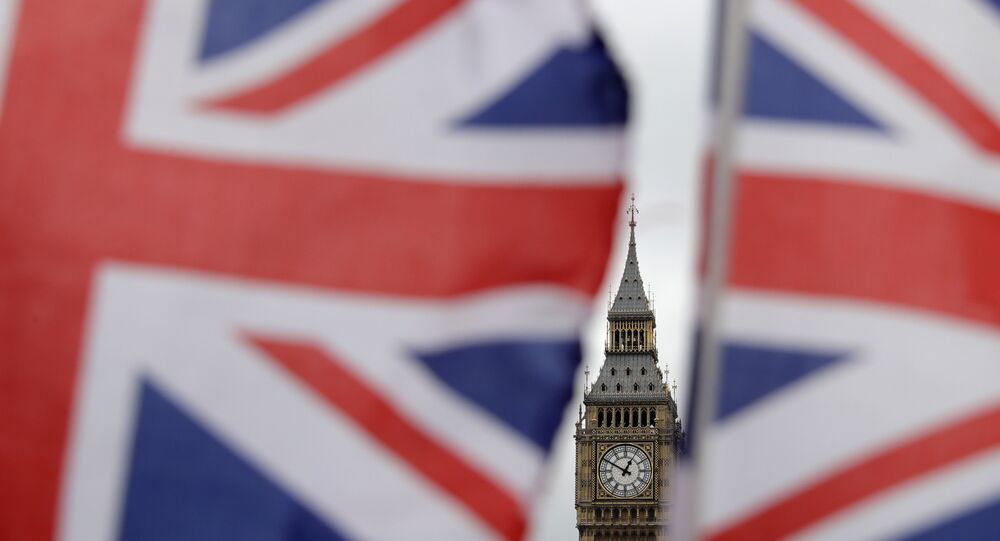 Several reports have found that the UK's public finances and labour market have improved over the past few months, while a major British bank has said its profits remained the same despite a series of legal and operational problems last year; all this comes amid rife Brexit uncertainty.

Kristian Rouz — Three separate reports from the British government and corporate sector have found that the island nation's economy has remained solid despite the concern over a possible "no-deal" Brexit and its implications for the UK's GDP growth.

According to the British bank Barclays, its profits came in at £3.5 bln for 2018, having remained roughly unchanged from a year prior — despite warnings that the risks to the investment climate posed by Brexit could cause a flight of capital and a decline in lending activity in the UK over the reporting period.

© AFP 2021 / ANIEL LEAL-OLIVAS
UK Chancellor Warns No-Deal Brexit Could Disrupt Economy in Near-Term
Barclays said 2018 was a "very significant year", with several major issues solved — including a 2.2 billion settlement with US regulators over its questionable lending practices in that country.

Meanwhile, the bank has also set aside some £150 mln as part of its contingency plan for a "no-deal" Brexit, should it come to reality.

Some economists are still concerned that Brexit woes could negatively affect the UK's banking sector this year. However, they admit that the ongoing negotiations could also produce an outcome far more optimistic than currently expected.

"Indeed Brexit uncertainty has prompted Barclays to put aside £150 mln in case of deteriorating economic conditions in the UK. That could prove to be insufficient or over-cautious, depending on proceedings in Westminster and Brussels", Laith Khalaf, of financial services company Hargreaves Lansdown said. "Therein lies the puzzle of the UK banking sector which explains lowly share prices".

Meanwhile, a report from the British government found that wage inflation has accelerated over the past few months, while job creation has maintained a sustainable pace. The UK's labour market remains at its multi-decade strongest just ahead of Brexit, the government said.

© AP Photo / Matt Dunham
UK Economy Slows Amid Brexit Turmoil, Still Set to Outperform EU
According to the Office for National Statistics (ONS), British wages rose 3.4 percent year-on-year in the last quarter of 2018. This is the quickest growth in individual earnings since before the 2008 crisis.

Additionally, the British economy added 167,000 jobs during the same period, in the largest gain since the first quarter of 2018, and above earlier projections of 140,000 new jobs.

But some experts are not convinced.

"The surveys (of business activity) deteriorated more markedly in January, so a Brexit effect might start to weaken employment growth in the next batch of official data", Andrew Wishart of Capital Economics said.

For their part, some British Conservative MPs, including those in the hard-line Brexiteer camp, have repeatedly accused the media of fuelling what they call "project fear". They say "project fear" has produced a flurry of apocalyptic economic predictions since the June 2016 referendum to leave the EU, most of which have failed to materialise.

Finally, the British government reported yet another improvement in its own finances this year. In January, budget income from taxation exceeded spending by £14.9 bln — the largest monthly surplus on record, according to a separate report from the ONS.

The report comes just ahead of the Spring Statement on public finances from Chancellor of the Exchequer Philip Hammond, which is set to be delivered on 13 March. Hammond has been a vocal critic of Brexit, warning against a "no-deal" divorce in particular.

But, as the Brexit deadline looms with no deal as of yet, the overall economic picture might suggest that the chancellor will have to soften his tone on Brexit in his upcoming address.

But some experts say there is still enough economic uncertainty to keep alarmist messaging part of Hammond's upcoming address.

"With the economy clearly struggling early on in 2019 after a sharp slowdown in the fourth quarter of 2018 and the Brexit situation highly uncertain, the Chancellor will have a lot on his mind when he presents the Spring Statement", Howard Archer of the EY Item Club said.

The ONS also said that the government's borrowing has decreased in the current fiscal year by £18.5 bln to £21.2 bln, the lowest year-to-date level in 17 years.

All these developments might suggest that the UK's economy remains sustainable, albeit somewhat shambolic, just over a month ahead of London's pull-out from the EU.