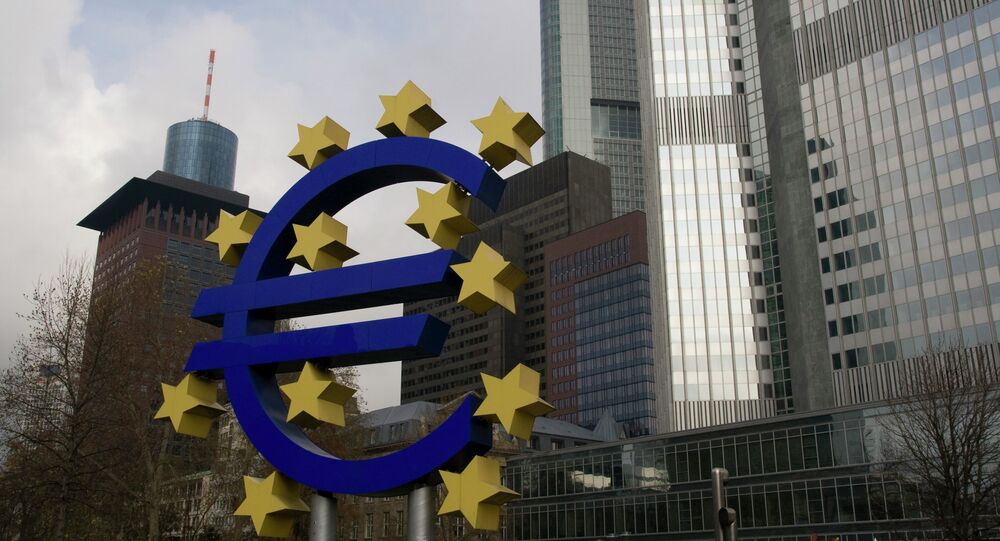 The Eurozone's manufacturing is in contraction, a new report has found, while the growth in consumer prices accelerated at the beginning of this year, suggesting weakening economic expansion and higher inflation could create a hazardous stagflationary conundrum in the single currency area.

Kristian Rouz — The single currency area's economy is showing signs of weakness amid accelerating inflation, stirring investor concern of possible stagflation in the Eurozone. The common currency is under pressure as well, as prospects for a US trade deal are still unclear, while the probability of a "hard Brexit" is weighing on business confidence as well.

According to a new report from Eurostat, core Eurozone inflation rose 1.2 percent year-on-year in January, after a 1.1 percent rise the previous month. However, monthly inflation dropped 1.2 percent — this, excluding such volatile categories of goods as food and energy, suggesting that European consumers are feeling the pressure of the slowing economy.

The Eurostat report found that price growth in the services sector contributed the most to the accelerating inflation, while alcohol and tobacco also drove the gains in consumer prices.

© AFP 2021 / OLIVER LANG
Merkel's "Tear Moment" Amid Talks With Obama on Eurozone Crisis Disclosed
A separate report from IHS Markit found that the Eurozone's manufacturing sector slid into contraction this month amid rising uncertainty and cooling global economic growth. The common currency area's Purchasing Managers' Index (PMI) in manufacturing came in at 49.2 in February — its lowest since 2013.

Eurozone manufacturing PMI stood at 50.5 in January, pointing to a weak expansion that month, but momentum appears to have faded away in the bloc's industrial sector. European exporters have previously voiced concern over a weakening demand for their products from overseas.

Meanwhile, recent speculation of the US possibly slapping steep tariffs on European cars has sent shockwaves across the bloc's auto-makers and related industries as well.

Forward-looking projections are hardly optimistic as well, as many economists aren't expecting a positive change in the near-term.

"The weakness is being led by manufacturing, which has now entered its first downturn since mid 2013", Chris Williamson of IHS Markit said. "With factory order books deteriorating at an increased rate, the rate of contraction in the goods producing sector will likely worsen in coming months".

Economists say that the Eurozone's GDP will hardly reach 0.1-percent quarter-on-quarter expansion in 1Q19, however, due to the rife economic risks, and the European Central Bank's (ECB) gradual removal of its accommodative policies.

"The limited national breakdown showed improvements in both Germany and France", Jack Allen of Capital Economics said. "All is not well in the manufacturing sector".

© REUTERS / Marko Djurica
EXCLUSIVE: Salvini Getting Ready to Leave Eurozone, Europe is Dying – Yanis Varoufakis to Sputnik
The ECB provided a murky outlook on the common currency area's economy in its most recent policy document, with policymakers saying that the central bank ending its unconventional 2.6 trillion bond-buying programme last year had taken a toll on the Eurozone's economic growth.

However, some economists say that upcoming data for the Eurozone could provide a more upbeat outlook on the economy.

"For the ECB, which has been looking for clues about whether the slowdown was temporary or could be more severe, this week's data will add to a more optimistic view", Bert Colijn of the Dutch bank ING said. But the ECB will likely "avoid further tightening", he added.

The ECB said that it is now preparing a new targeted stimulus, which will provide affordable loans to the euro area's commercial banks. Policymakers expect the measure to support lending and business and consumer activity in the Eurozone in the coming months, but a longer-term outlook remains uncertain.

Last year, the ECB was discussing the possibility of raising interest rates in 2019, but such plans appear to be off the table now, due to the rising threat of a new European recession.

Investor Confidence in Eurozone Plunges to Lowest Levels Since 2014 - Poll

'Eurozone is in Fragile Situation Awaiting Another Crisis' - Academic