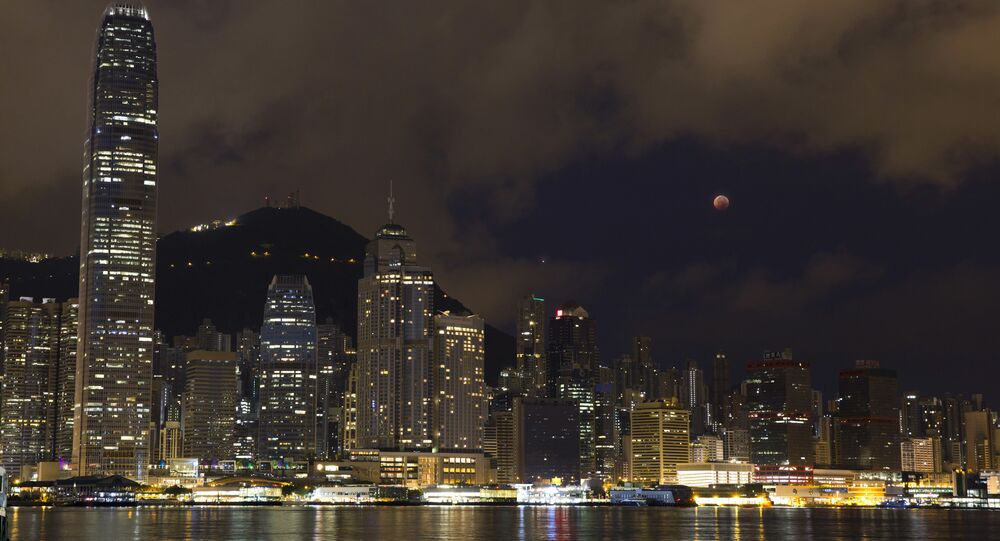 Hong Kong's economy is slowing amid the ongoing trade tensions between Mainland China and the US, as well as the Brexit-related uncertainty, which all render Hong Kongese CEOs anxious of this year's economic outlook.

Kristian Rouz — Hong Kong's pace of economic expansion has nearly halved in the fourth quarter of 2018 amid investor concern with trade tensions between China and the US, and a resulting decline in capital flow through one of Asia's largest financial hubs.

Amid the slowing economic growth, Hong Kong authorities are now expected to implement accommodative policies to help bring the autonomous city's economy back on track.

© REUTERS / Alexander Bibik
Huawei Executive Had at Least 7 Passports From China, Hong Kong - Court Files
According to Hong Kong's Secretary of Finance Paul Chan, the city's GDP growth was less than 1.5 percent in 4Q18 year-on-year, compared to 2.9-percent expansion in the previous quarter. City officials observed a slowdown in retail sales, zero growth in Hong Kong exports, as well as rising investor anxiety over the potential effects of possible further escalation in the trade dispute between the US and Mainland China.

"The economic slowdown was very obvious", Secretary Chan said. "The impact of China-US trade friction on Hong Kong's exports of goods has clearly emerged at the end of last year".

Hong Kong's exports, mostly, in financial services and commodities, dropped more than previously expected in December, just ahead of the ongoing "trade truce" between China and the US. Although trade in goods between the mainland and Hong Kong intensified that same month, overall retail sales underperformed as well, as the autonomous city is excessively exposed to overseas risks.

READ MORE: Russia's Rusal Shares Up by 7.7% at Hong Kong Exchange as US Lifts Sanctions

In this light, experts said that Hong Kong's administration could take steps to support the city's economy and offset fears of disruptions in international financial flows. Such expectations come after the central government in Beijing unveiled fiscal stimulus measures aimed at boosting the mainland's faltering manufacturing sector and domestic investment.

Meanwhile, Hong Kong's public finances continued to perform quite well, despite the economic slowdown. The city's budget surplus stood at $7.5 bln for the April-December 2018 period, according to Secretary Chan.

China Daily
China Details Upcoming Fiscal Stimulus, Touts Stable GDP Growth
However, for the entire financial year 2017, Hong Kong's budget surplus was at $17.58 bln, suggesting that the US-China tensions might have taken a toll on the autonomous city's public revenues as well.

Secretary Chan also said that total GDP growth for 2018 would likely reach only 3 percent, compared to 3.8 percent expansion in the previous year.

The official said that the ongoing slowdown in Hong Kong's economy could reverse the ascending trend of the previous decade, as the autonomous city has greatly benefited from serving as a mediator for financial transactions between Mainland China and the rest of world.

However, now that the global demand for Chinese goods is slowing, while one of China's biggest exports markets, the US, is pushing for a dramatic overhaul in bilateral relations, Hong Kong might lose its unique position as the financial gateway to China. US President Donald Trump is pushing for greater openness of the mainland's economy, which, if it happens, could render Hong Kong's mediation irrelevant.

"From what we see now, I would not rule out such a possibility (of a drastic economic slowdown)", Secretary Chan said. "It would show that the momentum behind our economic growth has slowed down quite quickly".

Chan also said that the ongoing tensions between the UK and EU as part of the Brexit process have also affected Hong Kong's businesses.

The British-Hong Kongese financial partnership remained strong following the city's return to China back in 1997, and now that UK financials have postponed some of their business growth plans due to Brexit, Hong Kong has suffered some of the consequences.

"External uncertainties and variations were relatively large, so when we prepared the budget, our theme was to support businesses, protect employment, stabilise the economy and benefit people's livelihoods", Secretary Chan said.

© AP Photo / Ted S. Warren
Economist on US Tariffs: 'The Trade War Will Be Particularly Damaging for China'
The secretary also pointed out that the majority of CEOs at Hong Kong's private-sector enterprises are pessimistic of economic prospects this year. Should Mainland China and the US achieve a sweeping trade deal, Hong Kong will have to boost its economic cooperation with other markets to make up for the possible losses.

In this light, some say the post-Brexit UK could show a greater interest in Hong Kong, along with Singapore, in its push to expand into non-European markets yet again. However, it remains to be seen how such plans might play out, meaning that corporate strategies from UK banks such as HSBC are in focus at the moment.

Meanwhile, Secretary Chan said that most CEOs in Hong Kong believe the economic situation in the city would deteriorate this quarter, while outlook for the rest of the year remains unclear and largely depends on how the US-China trade talks play out.