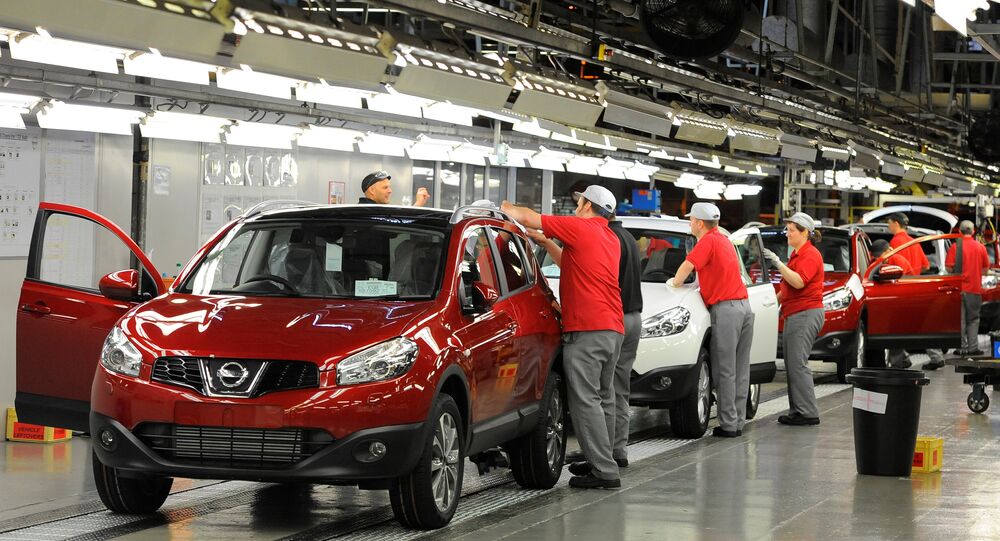 "This kind of support package to help in areas such as training and skills is typical across the industry. Clearly, we will be reviewing it in the light of this decision," the government source was quoted as saying by The Times newspaper.

© AP Photo / Ng Han Guan
Ex-Nissan Head Ghosn Claims 'Plot and Treason' Led to His Arrest - Reports
According to the newspaper, UK Secretary of State for Business Greg Clark was told by Nissan that switching production from the United Kingdom to Japan was “not negotiable."

Clark, for his part, reportedly described the news as a “blow to the sector and the region," but stressed that the automaker had confirmed that no jobs would be lost.

Gianluca de Ficchy, the chairman of Nissan Europe, explained the manufacturer's decision by citing business reasons, in particular, the decrease in diesel sales across Europe and "reduced volumes forecast" for X-Trail in Europe. At the same time, however, he acknowledged that Brexit was making doing business in the United Kingdom more difficult.

© AP Photo / Itsuo Inouye
Nissan Ex-Head Illegally Received $8.9Mln From Joint Mitsubishi Venture - Car Producer
The United Kingdom's multimillion-pound package, offered to Nissan in 2016 in the wake of the Brexit referendum to keep the manufacturer in the country, was tied to the automaker's pledge to manufacture the new X-Trail sport utility vehicle alongside a new Qashqai model in its Sunderland plant in England. The production was expected to generate hundreds of jobs. However, the company announced on Sunday that it had decided to consolidate X-Trail production in Japan, citing wider industry pressures in the United Kingdom and Brexit uncertainty.

The United Kingdom is set to leave the European Union on March 29. While the two sides have agreed on a withdrawal deal, it has not yet been approved by UK lawmakers, which has prompted fears both in Brussels and in London of a no-deal Brexit.