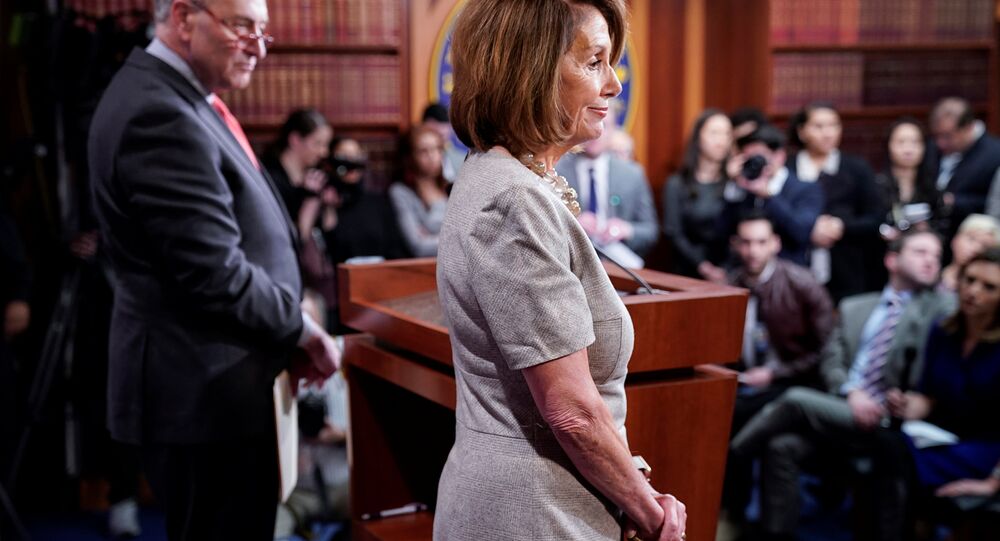 The political cost to the Republican Party and US President Donald Trump following the reopening of the US government after it’s unprecedented 35-day shutdown has become painfully clear, according to reports.

Forced by the opposition to drop his long-held demand for $5.7 billion to begin construction of a wall on the Mexico-US border, Trump has instead agreed to a broader discussion of cost-effective border security after more than a month of threats and political bluster.

Previously seen as a defining element to the Trump presidency, the failure of the US leader to gain legislative or popular support for his border wall has provoked frustration and anger among the more conservative elements of the GOP, as well as having revealed a similar sentiment in poll results that show Trump's popularity in the nation declining significantly, according to a report by the Financial Times.

© AP Photo / Gregory Bull
Damn Lies and Statistics: Trump’s Inaccuracies About His Border Wall - Report
The economic fallout from the 35-day shutdown — the longest in the nation's history — has now been calculated as overshadowing Trump's earlier border wall cash demand, after S&P Global Ratings ran the numbers at some $6 billion lost by the US economy during the closure.

With the installation of anti-Trump hardliner Nancy Pelosi as Speaker of the House — third in line to the US presidency — a newly-empowered Democratic opposition has sent worrying signals to the GOP, particularly given the unpredictable nature of the current administration, according to Ft.com.

An aid to former Republican House Speaker John Boehner, Michael Steel, noted that Trump missed the opportunity to get what he wanted prior to what is now considered to be an unnecessary government shutdown.

© REUTERS / Alexandre Meneghini
Trump Says 'Illegal Aliens' Are Too Pricey, Cites Inflated Immigration Stats
"If you look back on the times when [the GOP] had unified control, and there was an opportunity to enact a compromise," Republicans at the time could have taken advantage of "a pretty good deal," Steel noted, cited by Ft.com.

Republican promotional aide Matt Mackowiak suggested that, following Trump's cave-in at the hands of the Democratic opposition, there was currently "a lot of confusion and concern" within the GOP.

"What was the point of this?" Mackowiak asked, adding, "If we were going to get nothing, how about we avoid all the pain for the past 35 days?" cited by Ft.com.

The GOP operative added that the agreement signed by Trump on Friday to allow the government to reopen was on the table in December 2018 but was refused by the president, leading to the shutdown.

© AP Photo / Richard Drew
Shutdown Aftermath: No Trump Wall, $6 Billion Lost, Says Wall Street
"Everybody has been looking for an off-ramp. It was there 35 days ago," Mackowiak pointed out.

The victory, however, belongs to Pelosi, according to multiple reports that have noted her unwillingness to compromise with Trump.

Democratic policy aid William Galston acknowledged the Speaker's apparent win through the use of a bullfight analogy.

"It was almost like [the president] was the bull and [Pelosi] was the matador, and every time she flipped her cape, he went charging by and she stuck another banderilla in him," Galston remarked, cited by Ft.com.

"In the perception of many people, and not just Democrats," he said, "[Trump] was thoroughly outplayed by the speaker of the House."

Although Beltway pundits note that Trump now finds himself in a more weakened political position than a month ago, the president could still exercise the highly-controversial move of using executive emergency powers to construct his wall.