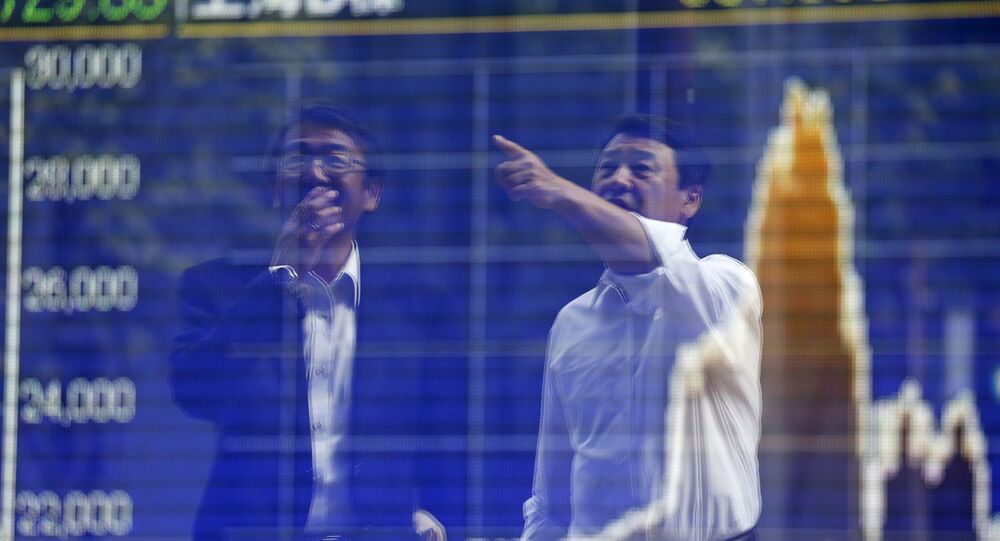 Japan's central bank is keeping interest rates at their current levels and lowering inflation expectations for this year, citing the risks posed by international trade tensions, Brexit, and the lingering uncertainty over ongoing trade talks with the US.

Kristian Rouz — Bank of Japan (BOJ) officials are expecting subdued inflation this year as overseas headwinds and global trade tensions are threatening a further slowdown in exports. The BOJ has also decided to maintain its negative interest rates regime (NIRP) for the time being, until the global uncertainty clears out.

During a policy meeting Wednesday, the BOJ kept its base interest rates unchanged, in line with previous expectations, at —0.1 percent. The decision suggests Japan's unconventional monetary policies, launched back in 2013, are set to continue well into this year.

© AFP 2021 / Kazuhiro Nogi
Japanese Gov’t Officials Tout Strong Economic Fundamentals, Urge Free Trade
Japan's central bank also reaffirmed its assessment of the state of the national economy, saying inflationary pressure could weaken this year, while GDP growth will continue at a steady pace. While some experts are concerns about the outlook, mainly, due to the ongoing slowdown in exports, BOJ officials are more optimistic as they are eyeing an upcoming free trade deal with the US.

"Japan's economy is likely to continue on an expanding trend through fiscal 2020", BOJ analysts wrote in the central bank's quarterly report.

This comes after a separate report from the Japanese government found the nation's exports fell in December for the third consecutive month. Japan's goods deficit came in at 55.3 billion yen ($504 million), according to the nation's Finance Ministry. Japanese exports dropped 3.8 percent, while imports rose 1.9 percent — based on the Ministry's review of the customs data for that month.

READ MORE: Prof Explains Why US Turning Its Back on WTO Amid Sino-American Trade Row

© AFP 2021 / WANG ZHAO
Japanese Yen, Swiss Franc Rally Amid US Political Tensions, Trade Woes
For all of 2018, Japan posted a trade deficit of roughly $11 billion — mostly, due to the high prices of energy for most of the past year, but also due to a drop in exports stemming from international trade tensions.

Japan's imports increased 9.7 percent year-on-year, to $754 billion, while exports rose 4.1 percent to $743 billion for the past year. Japan posted trade surpluses with the US and Asia as a whole, but ran deficits with Europe and China last year.

In light of this, the BOJ has taken a wait-and-see stance on policy, as policymakers expect the nation's foreign trade to improve this year.

"Overseas economies are expected to continue growing firmly on the whole, although various developments of late warrant attention such as the trade friction between the United States and China", the BOJ said.

© REUTERS / Lee Jae-Won
US Unveils Goals for Upcoming Japan Trade Talks
Meanwhile, some economists believe this year, Japan is well-positioned to attract a significant influx of foreign investment, not least due to the expectations of a deeper economic cooperation with China and the US, as well as due to the yen's status as a global reserve currency.

Additionally, Japan's own investment in other Asian economies are expected to bring in ever-increasing returns — due to a string of successful projects across the continent, which, some say, could overshadow China's celebrated Belt and Road Initiative.

"Compared to China's state-backed projects, Japanese projects are more resilient because they have a large number of financial backers", analysts from The Institute of Developing Economies, a partner think-tank of the Japan External Trade Organisation, wrote in a recent study.

However, despite the expected growth in exports and the ongoing influx of capital, Japan is still facing risks related to Brexit, the US Fed's tightening cycle, and trade disruptions across the globe.

"Such downside risks concerning overseas economies are likely to be heightening recently, and it also is necessary to pay close attention to their impact on firms' and households' sentiment in Japan", BOJ officials said.

© REUTERS / Yuya Shino
Japanese Economy Braces for Q3 Slowdown Amid Tepid Retail Sales
Japanese central bankers also said this year it will be hard for them to achieve the 2-percent inflation target due to the aforementioned concerns. Japan's annual inflation has slowed to 0.3 percent this month, according to some estimates, after falling from 1.4 percent in November and 0.8 percent in December.

Subsequently, the BOJ lowered its inflation expectations for this coming April (the beginning of fiscal 2019) to 0.9 percent from 1.4 percent. Meanwhile, according to a poll by Reuters, most experts believe Japanese inflation will stand at 0.7 percent in April.

In 2020, the BOJ said, consumer price growth could accelerate to a sustainable 1.4 percent — compared to 1.5 percent expected previously.

All of these might suggest Japan's economy remains on track to gradual normalisation of monetary conditions — particularly so, if the Sino-American and Japanese-American trade talks both produce mutually-beneficial trade agreements. Additionally, Japan's possible signing of a peace treaty with Russia could boost trade in Northeast Asia as well.

The resulting acceleration of Japan's GDP growth would push inflation above the current estimates, prompting the BOJ to adjust its policy accordingly.