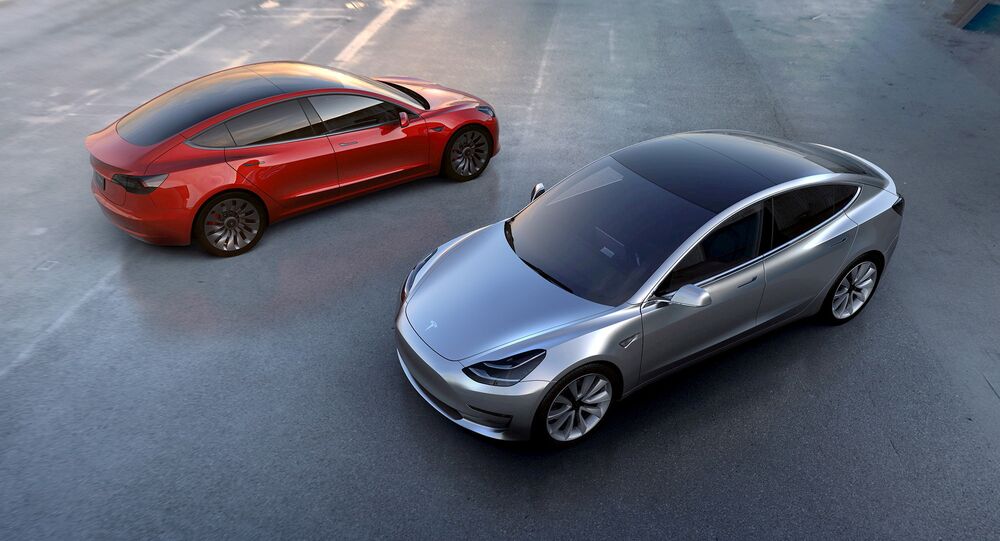 European lawmakers have given the green-light to Tesla after roadworthiness tests of its affordable Model 3 sedan, clearing the way for the US automaker to compete with Mercedes, Volkswagen and others in the eco-friendly car market.

Tesla's Model 3 was approved by the Netherlands Vehicles Authority (RDW), the regulatory body charged with approving and licensing vehicles and auto parts, data published on its website revealed. Deliveries should begin in February for long-range battery versions.

European Model 3s off the production line. Design yours at https://t.co/7Ol1BvJoj8 pic.twitter.com/7PouXWbwGz

© AP Photo / Ng Han Guan
Tesla Makes Gigafactory Breakthrough in Shanghai, Production to Start in 2019
The go-ahead has helped Tesla enter European markets, providing the company with a much-needed boost to profits following increased competition from other automakers such as BMW, Volvo, Toyota, Renault and others. Tesla began posting a 4 percent profit increase in January — the first since 2016.

Tesla has seen a wave of troubles over recent years after CEO Elon Musk tweeted comments, sparking an FBI probe on allegations he had defrauded shareholders. US President Donald Trump also ended a federal programme of $7,500 in federal tax credits to eco-friendly car buyers, leaving 3,000 overstocked Model 3s in the company's US inventories. The automaker also had to slash its full-time staff by seven percent in order to reduce costs on Model 3 production, Elon Musk said in an email published on 18 January.

World’s largest underground Tesla Supercharger Station in Shanghai with 50 Stall. I was lucky enough to be the very first Tesla owner to charge at this magnificent station. #Tesla #TeslaChina #Supercharger #Shanghai pic.twitter.com/8dLExPJe4x

Tesla has also moved some production to Shanghai due to the ongoing China-US trade, where President Trump slapped Beijing with 25 percent import tariffs on steel and 10 percent on aluminium in Spring 2018, prompting Beijing to reciprocate with matching tariffs on US imports.</