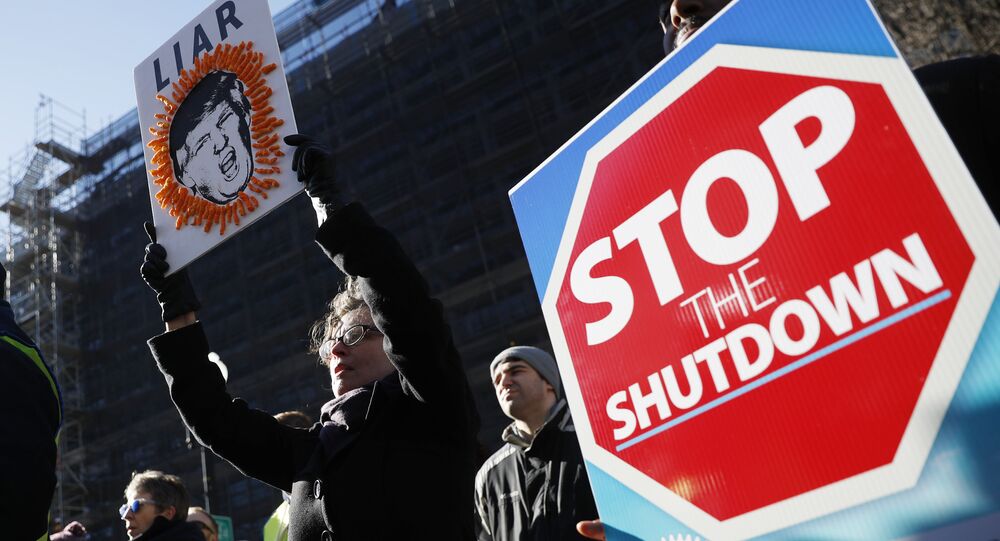 The current shutdown of the US government has become the longest in the nation’s history, as unpaid federal employees walk off the job in increasing numbers.

© REUTERS / Carlos Garcia Rawlins
The 2 Percent: Border Wall GoFundMe Falls Far Short, Will Refund Donations
An estimated 800,000 federal workers employed by the US government are starting to feel the pinch as Friday paychecks were missed and key travel security sectors — particularly in airports — are seeing walkouts, according to multiple reports.

The Trump shutdown, now in its 22nd day, passed on Saturday a notorious 21-day benchmark that occurred during the administration of US President Bill Clinton.

Begun December 22, 2018, the current shutdown shows no signs of resolution as Trump and his Republican Party are seen to be at a stalemate with the opposition Democratic Party, as both sides dig in their heels, according to a report from The Hill.

Although some moderate Republican Senators attempted to end the standoff, party hardliners, including McConnell, refused, and the weekend guarantees that the shutdown will last into at least Monday afternoon, assuring a 24-day closure.

© AFP 2021 / Brendan SMIALOWSKI
US House Passes Bill to Fund Interior Department, EPA Amid Gov't Shutdown
At least 25 percent of the US federal government closed its doors in late December after Trump refused to sign the Senate's seven-week stopgap bill unless some $5.6 billion to fund his border wall was attached.

Senate Minority Leader Charles Schumer (D — NY) and House Speaker Nancy Pelosi (D — CA) have drawn a line in the sand over paying for Trump's much-promised border wall and all bets are off regarding how the war of wills will end.

An estimated 800,000 federal workers missed their paychecks on Friday, and many have been either furloughed or told that they must work for free or be fired, according to the Hill.

The newly Democratic House majority has not been idle, however, passing several packages of bills to fully reopen the US government, while also passing a handful of individual appropriations bills.

Those House measures die in the Republican-controlled Senate, however, as McConnell continues his refusal to reopen the coffers until Trump gets his border wall cash.

McConnell shot down a Thursday measure by the House to fully reopen the government, stating that the move to pay workers was "absolutely pointless," cited by The Hill.

© Sputnik
Gov't Shutdown Continues; US Only Removes Equipment Not Troops From Syria
After half a term of contradictory edicts and antagonistic actions result in a deep lack of trust in the current White House, many Republicans now privately concede that Trump's high-noon border-wall standoff has been made much worse by an inept administration that continually changes its course and a leader that regularly undercuts his closest advisers, according to The New York Times.

"Shutting down the government is not governing," Murkowski stated before the Senate on Friday, prior to the weekend recess.

"Nobody is winning in this," she added, cited by The Hill.

Gov't Shutdown Continues; US Only Removes Equipment Not Troops From Syria

Neither Trump's Speech nor the Democrats Response Will End the Shutdown