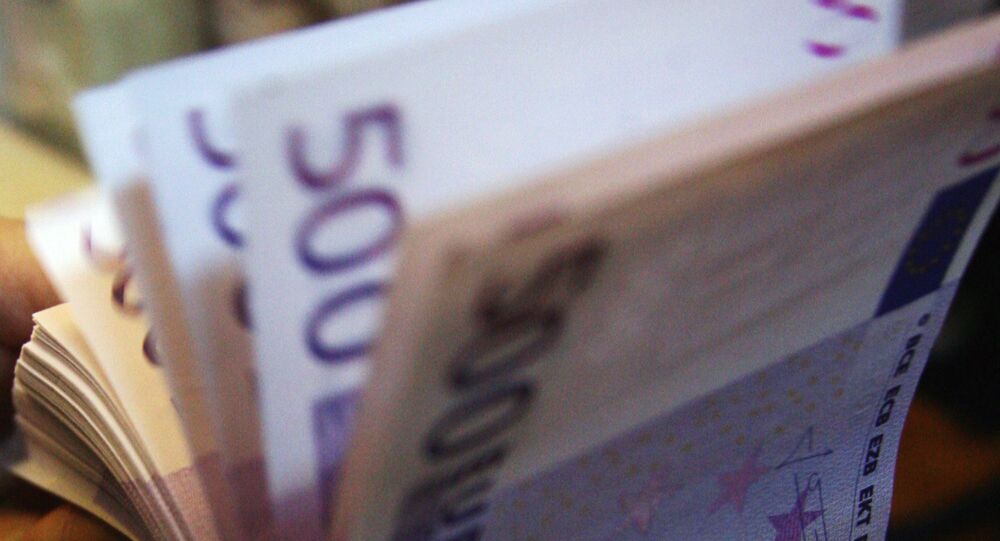 Calls for the withdrawal of the high-denomination banknote from circulation have been heard for years, with the bills becoming associated with cash-based crimes, including tax evasion, money laundering and the drugs trade.

By the end of January, only the German and Austrian central banks will be issuing 500 euro notes, with the other 17 central banks in the euro area halting the issuance of the violet-coloured notes by January 27, the European Central Bank (ECB) said in a statement.

According to the ECB, "to ensure a smooth transition and for logistical reasons," Deutsche Bundesbank and Oesterreichische Nationalbank will continue issuing the bills until April 26, when they too will stop doing so for good.

© Photo : Euro Banknote Memory
Bumpy Road: Euro's Fate in Limbo After 20 Years of Existence
Plans to halt the issuance of new 500 euro notes were approved in May 2016, with the ECB justifying the decision stemming from "concerns that this banknote could facilitate illicit activities."

Holders of existing 500 euro banknotes can rest assured that the remaining bills will stay legal tender, with currency exchange operators and other commercial operators allowed to both accept and disburse the bills.

The 500 euro bill is one of the top five highest value banknotes in the world, but has gained a shady reputation by many as the favoured note of criminals. Rarely seen by ordinary Europeans, the bills have been nicknamed "Bin Ladens," both for their alleged use in the financing of crime and terrorism, and for their status as being well-known, but very rarely used in day-to-day commerce.

In the UK and Spain, police are using the high-value bills to track money laundering operations. In a 2010 study, the UK's Serious Organised Crime Agency reported that a whopping 90 percent of all 500 euro notes in the UK were being used exclusively by criminals.

© AFP 2021 / PHILIPPE HUGUEN
Farewell to Greenbacks? EU Challenges Dollar Dominance With 'Stronger' Euro
According to ECB figures, there are now about 521 million 500 euro notes in circulation, with the banknotes making up over 20 percent of the total value of euro banknotes, while constituting less than 2.5 percent of the currency's total notes. 500 euro notes were actually last printed in 2014, with euro-area banks gradually releasing the bills into circulation from existing stocks since then.
...
Reddit
Google+
Blogger
Pinterest
StumbleUpon
Telegram
WhatsApp
112