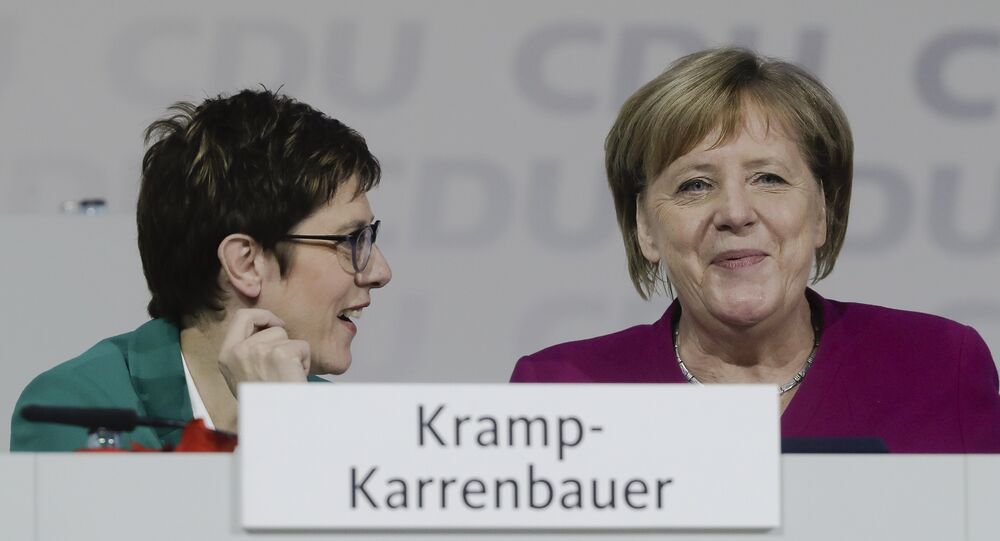 © AP Photo / Jens Meyer
New German CDU Leader Intends to Overhaul State's Migration Policy
Of the several prominent political parties in Berlin, CDU in particular received a much higher share of the estimated $2.4 million in so-called large donations over the course of the year.

Business interests were seen to be the biggest contributors to Merkel's party, even as she steps aside for new CDU boss Annegret Kramp-Karrenbauer.

Berlin's parliamentary administration has revealed that the CDU raked in the equivalent of $972,267 in 2018 from political donors, including big-ticket shareholders in legacy German automaker BMW.

CDU's largest windfall came from a former CEO of the Merck pharmaceutical company, Hans-Joachim Langmann, who ponied up almost $300,000 in July.

A single donation of just over $400,000, however, was lavished on the German Communist Party (DKP) in May.

Possibly hedging bets for their political influence for the upcoming year, the chemical firm Evonik and carmaker Daimler each gave both the SPD and the CDU just over $200,000 during 2018.

As for the outsider nationalist parties, the Alternative for Germany (AfD) and the Left Party claimed no large donations as of the December 28 list posting due, in part, to an ongoing investigation into AfD parliamentary leader Alice Weidel's illegal acceptance of some $150,000 from a Swiss pharmaceutical company, according to Deutsche Welle.

Merkel, a four-term chancellor, will step down from her leadership of Germany in 2021.