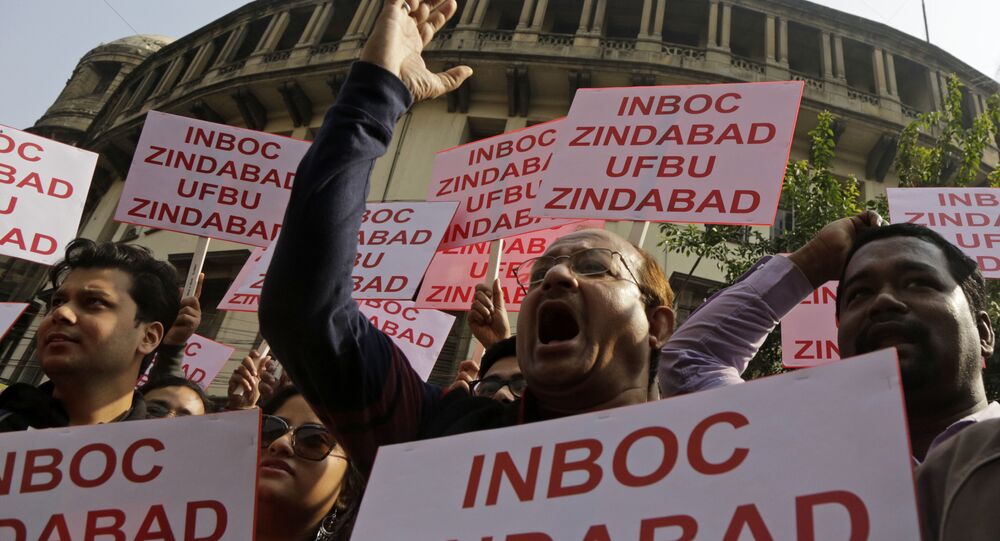 Banking operations were paralysed for a day in India as over one million employees of public, private and foreign banks went on strike to protest against the merger of two public-sector banks.

New Delhi (Sputnik) — In the second bank strike within the last seven days, more than a million bank employees from across the nation came together to participate in the industrial action on Wednesday, according to a press release.

The strike, called by the United Forum of Bank Unions (UFBU), an umbrella body of bank unions in India, brought banks to a standstill.

The banking unions are protesting the proposed merger of Vijaya Bank and Dena Bank with the Bank of Baroda. Banking services, like deposits and withdrawal at branches, cheque clearances, and the issuance of demand drafts and other operations, were halted for the day due to the nationwide strike.

In its announcement of the proposed merger in September, the Indian government said that the merged entity will have a combined business revenue of Rs 14.82 trillion, making the unified entity the third-largest bank in India, behind the State Bank of India (SBI) and the HDFC Bank.

© AFP 2019 / JUSTIN TALLIS
India's Central Bank Governor Resigns Amid Feud With Gov't
On the other hand, unions are claiming that the merger is not in the interests of banks nor consumers.

"The government wants banks to grow in size through this amalgamation but even if all public sector banks are bundled into one, the merged entity cannot find a place among the top 10 banks globally," the United Forum of Bank Unions said in a press release justifying the strike.

This merger will see a large number of branches closed, resulting in customers facing hardship, the UFBU warned.

This massive proposed merger comes after the largest Indian lender, the State Bank of India, amalgamated its five subsidiary banks into its fold and acquired the Bharatiya Mahila Bank — a financial institution created exclusively for women. The merger paved the way for the SBI to become one of the top 50 largest lenders in the world.

Other than opposing the merger, banking unions are also demanding pay rises and better working conditions for employees. Raghuram Rajan, governor of the Reserve Bank of India, has backed these calls.