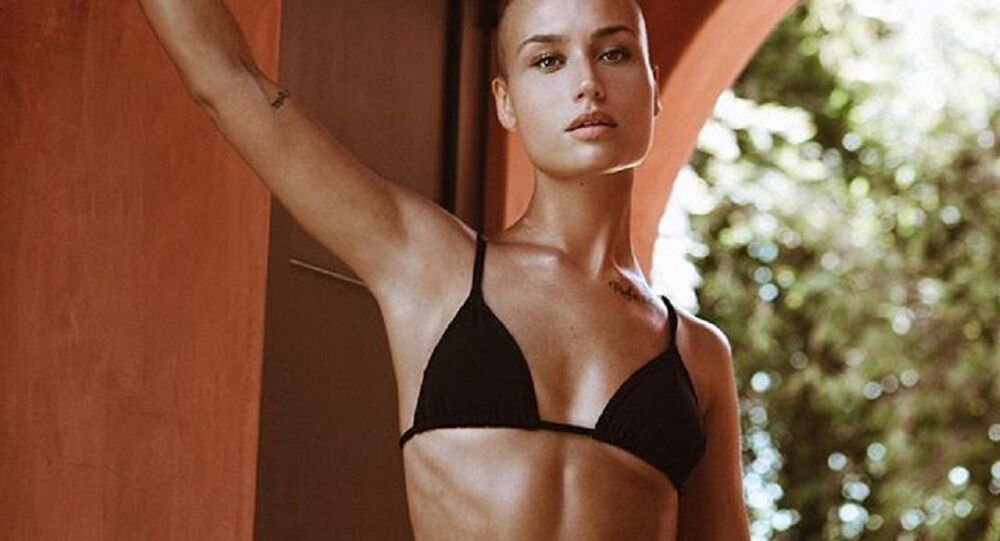 Lindblom’s shaved head has not always played into her hands, since the fashion industry largely upholds conventional beauty standards and most editions pick long-haired beauties to pose for them. Anyway, there was apparently more to her choice to make a radical change to her appearance several years ago.

The 23-year-old Stockholm-born model, Vendela Lindblom, has been cast by Playboy as its first ever playmate with a shaved head, and, on top of it, will appear in Playboy’s January 2019 issue as Playmate of the Month.

One minute you hate his guts, next minute he’s in your guts. Life changes fast. BTS shot from my @playboy shoot with @joshryanphotos

She shared with the Blast that she has no plans to grow her tresses again, but, conversely, is set to retain her current looks and not to forget to think positive: “I understand that my look isn’t for everyone”, she told the edition, adding: “It’s important to stay positive, focus on your goal and power through”.

Vendela says the decision to take a U-turn and buzz her hair five years ago was incredibly liberating and also one that helped her feel “one hundred percent” sexier. “I don’t even like to put wigs on. I feel more empowered without the hair. Before, I used to be so obsessed with my hair. If I had a bad hair day, it could almost ruin my whole day (keep in mind that I was a teenager last time I had hair, anything could ruin my day). Now I don’t even have to think about it!” she explained.

When you accidentally push a pull door (yes, this happens to me every. single. time.) and the person behind you says “you need to pull” oMg tHaNkS Karen I was just about to lift the door up from the bottom.

Women are attracted to the most stupid shit like “men who can dance”. How is that beneficial? Can he change a tire? He gonna moonwalk you home?

Instead of dyeing your hair after a breakup, just cut off the exact length of his dick so you can post your next selfie with the caption “not gonna miss those 6 inches, Mike”

The news was taken with a grain of salt by some Internet users, one calling the move in Russian “an animal grin of tolerance”, with another thanking one media outlet for not publishing Vendela’s picture on Twitter:

Another user weighed in asking in comments on Instagram which “boxing club” she belongs to, referring to her nude photo shoot in boxing shoes and a robe barely hiding her shoulders "Boxing Shoes Only"…FTW!” another exclaimed.

“Need a sparring partner?” one remarked, tongue-in-cheek. Nevertheless, applause also came in abundance, with netizens hailing Playboy’s move and greatly “empowering” Vendela: “Perfect blend and statement by Playboy. Finally FINALLY the look and feel of rebuilding the brand and gaining relevance in 2019. Somebody got some vision over there and I hope they stick with it. Kudos —she's a knock out. Winner”, one stated inviting Vendela to “make it a campaign”.

“Just read your interview and it’s great! Love the answers and yes keep pushing your comfort zone and enjoy life”, another fan wrote.

Before being announced as Playboy’s January 2019 Playmate of the Month, she worked as a model behind “Battlefield 1’s” first female multiplayer character.

According to Vendela, her boyish, badass look has not always secured her good and well-paid employment, since it has more than onсe been a handicap, as glossy magazines, choosing between her and long-haired divas, usually opt for the latter. Lindblom’s portfolio and biography may be found inside the iconic magazine’s winter edition, which will hit the shelves on Christmas.

READ MORE: 'We Are All the Same': Exotic-Looking Model Poses for Semi-Nude PHOTO

Playboy appears to not be the only magazine to have recently broken the unspoken beauty standards: in April, Vogue historically placed a headscarf-wearing model on its front page, fuelling a storm of reaction both off- and online.