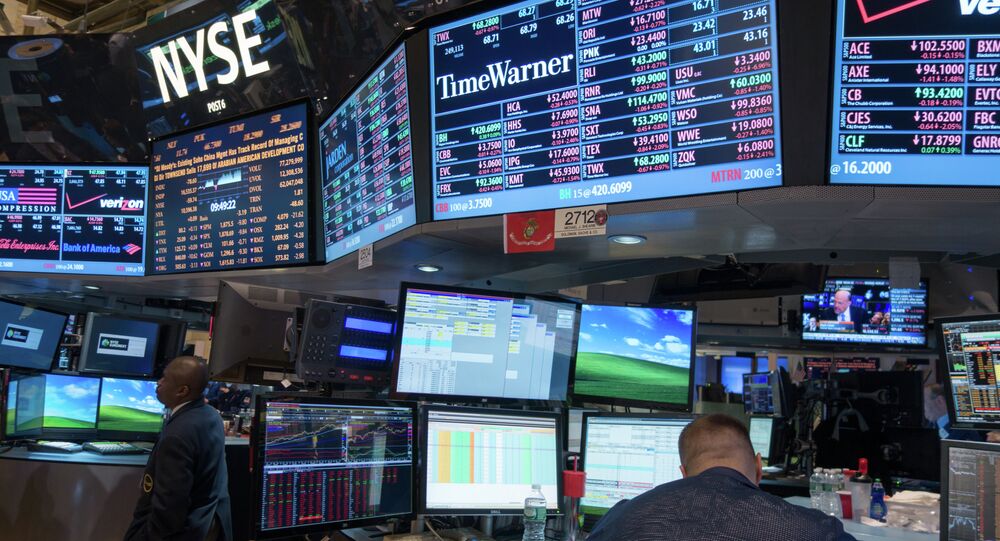 Stocks plummeted once again on Monday, driven largely by fears the Federal Reserve is planning to raise interest rates later this week. At this rate, the Dow Jones and S&P 500 are on track for their worst December since the Great Depression in 1931.

On Monday, US President Donald Trump urged the Fed, which functions as the United States' central bank, not to raise interest rates for a fourth time this year. Fear of such a hike has been one of the forces driving the market's volatile behavior in the last few months.

"It is incredible that with a very strong dollar and virtually no inflation… the Fed is even considering yet another interest rate hike," Trump tweeted Monday.

It is incredible that with a very strong dollar and virtually no inflation, the outside world blowing up around us, Paris is burning and China way down, the Fed is even considering yet another interest rate hike. Take the Victory!

© AP Photo / Richard Drew
US Stocks Plunge Amid Fears Trade Row With China to Amplify
​Despite this, financial exchange company CME, which owns the Dow Jones stock and financial indices, gives it nearly an 80 percent chance that the Fed will raise interest rates a quarter point following its Wednesday meeting, to somewhere between 2.25 and 2.5 percent — their highest levels in a decade, since the 2008 financial crisis.

"With increased stock market volatility and signs of slower growth overseas, there are increasing calls for the Fed to halt its rate increases," wrote David Kelly, chief global strategist at JPMorgan Funds on Monday. "This is where the Fed needs to keep its head first, because current Fed policy is neither too aggressive nor too tight and second, because a change of course at this point could undermine confidence."

CNBC notes that many of Wall Street's gauges of market behavior now show a decline. The Russell 2000, which tracks smaller companies' performance, entered a bear market, down 20 percent from its 52-week high, and the Cboe Volatility Index hit its highest level in a week.

"I'm pretty sure this is a bear market," Gundlach said on CNBC's "Halftime Report."