Market experts predict a crucial time for the Indian economy cautioning that in the eventuality of the BJP not managing to retain power in the states that recently went to polls; the party that is in power at the center may go on a populist measures spree at the cost of crucial market reforms.

The Bombay Stock Exchange (BSE) index on Monday dived over 700 points as the market became nervous on the speculations of a negative result for the Bharatiya Janata Party (BJP) led by Prime Minister Narendra Modi in the recently held elections to five state assemblies.

To make the situation worse, the top man at the Reserve Bank of India (RBI) resigned lending arsenal to critics who described it as the culmination of the prolonged feud between the central bank and the executive over the use of sovereign reserves. 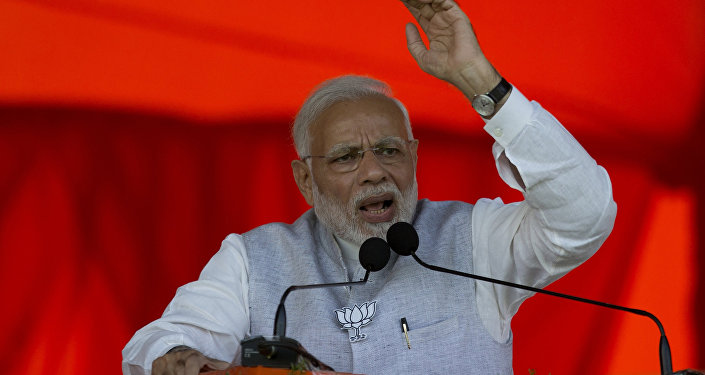 © AP Photo / Mahesh Kumar A.
Exit Polls Give Thumbs Down to Indian PM Modi’s BJP in Five State Assemblies
Exit polls conducted by various bodies predicted unfavorable results for Modi's party in the elections to at least three state assemblies of the five which went to polls last month. While the actual results are to be declared on Tuesday, the exit polls predicted a tight finish between the BJP and the Congress in Madhya Pradesh and Chhattisgarh and a win for the opposition party in Rajasthan.

"Apart from the fear of the government going back on market reforms due to a possible setback in polls, as exhibited by exit-polls results, a weakening rupee and crude oil price rise amid the escalation in US-China trade tensions are also reasons for the weakening market. The days to come are crucial for Indian economy. If the government goes on an overdrive with popular measures to win back its vote share, it could sound a further alarm in the market," Harikrishna Sharma, economic commentator, and columnist told Sputnik.

The BSE is India's biggest and the world's 10th largest stock exchange with an overall market capitalization of more than $2.3 trillion located in India's commercial hub of Mumbai. The Indian economy and market behavior are more or less reflected through the Sensex graph of the BSE.