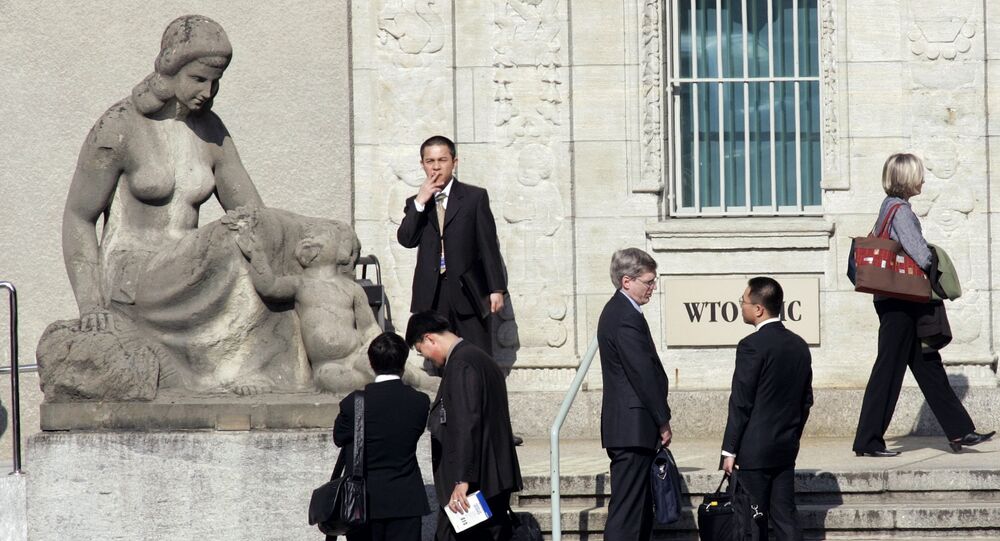 The statement came after Kevin Hassett, one of US President Donald Trump's top economic advisers, said that he does not rule out that China could be "evicted" from the World Trade Organisation (WTO).

A statement by the US President's economic adviser Kevin Hasset has said China could be expelled from the World Trade Organisation (WTO). This makes no sense and is a reflection of Washington's arrogance, according to Chinese Foreign Ministry spokesman Geng Shuang.

Recalling that the WTO is "a multilateral organization" and that "all its members are equal", Geng told reporters that the US is not authorized to deprive China of its membership in the WTO.

"Such a statement mirrors the arrogance showed by the United States. […] If I remember right, the US previously declared a desire to withdraw from the WTO, and now they are talking about the need to exclude China from membership in the organization. This is extremely absurd," Geng pointed out.

He also underscored China's adherence to creating a transparent world economy and a multilateral trading system.

"In July of this year, the WTO published the seventh review of China's trade policy, which praised Beijing's support of the multilateral trading system and highly appreciated China's growing role in the WTO," Geng pointed out.

In a separate development, China's commerce ministry rejected new US accusations that it perpetuates "unfair" trade practices and warned Washington against making provocations.

"The US side made groundless new accusations against the Chinese, and China finds it totally unacceptable. We hope the United States will drop the words and behaviour that damage bilateral economic and trade relations and adopt a constructive attitude," Commerce Ministry spokesman Gao Feng said, adding that Washington's stance on the matter reflects US unilateralism, in violation of WTO rules.

Speaking to the BBC on Wednesday, Kevin Hassett, chairman of the US President's Council of Economic Advisers, specifically claimed that China had "misbehaved" as a WTO member.

"We never really envisioned that a country would enter the WTO and then behave the way that China has. It's a new thing for the WTO to have a member that is misbehaving so much," Hassett noted.

He argued that the problem could be resolved by means of bilateral talks, a reform of the WTO or even via the removal of China from the organization.

"Should we pursue evicting China from the WTO?" Hassett said.

Also on Wednesday, Bloomberg reported that in a recently released 53-page report, the US trade representative’s office blamed China for allegedly conducting a global espionage campaign to collect sensitive commercial information and operate an unfair technology transfer scheme whereby US companies are required to hand over tech and IP to their Chinese competitors.

READ MORE: WTO to Look at China Bid to Target $7Bln Worth of US Imports – Source

In late July, WTO Director General Roberto Azevedo warned that the ongoing trade war between the US and China may become "the worst-case scenario for the global economy, for the consumer, for everyone on the surface of the Earth."

© AP Photo / Fabrice Coffrini
US Launches WTO Disputes Against Reciprocal Tariffs From China, EU, Canada
The current trade spat between Washington and Beijing escalated earlier that month, when the US announced 25 percent duties on $50 billion worth of Chinese goods, to which Beijing responded by imposing restrictions on the same amount of US imports.

Trump has repeatedly accused China of "unfair trade," including alleged state-led efforts to steal US technology and intellectual property as well as "discriminatory technology licensing practices."

China Officially Advises WTO of $611.5Mln in Tariffs Against US Products

China Moves to Unite WTO Members Against US Protectionist Policy