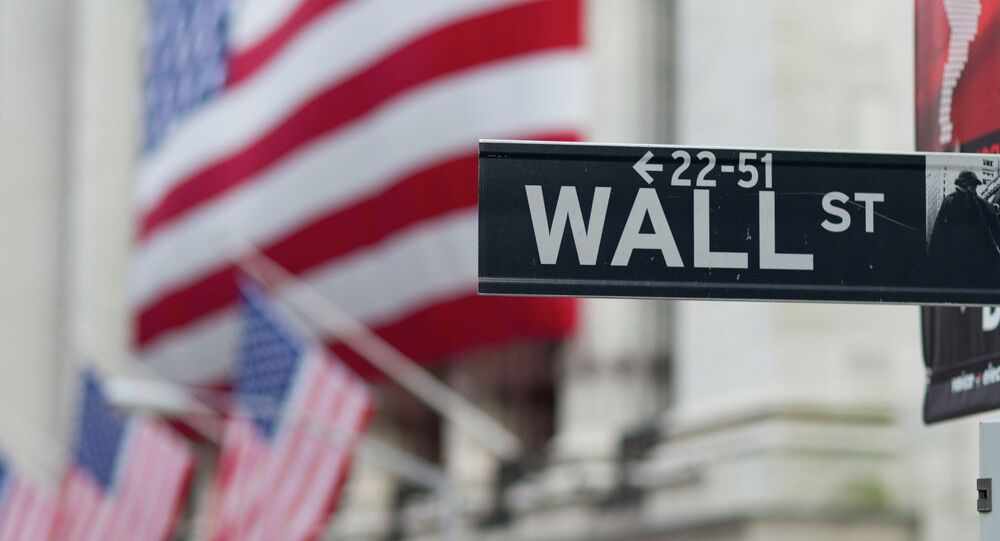 Economic experts from major international financials, academic circles, and government agencies say the US is facing mounting risks of a recession due to elevated uncertainty in international trade, a possible slowdown in domestic investment, and rising costs of doing business.

Kristian Rouz — Several new reports from economists and investment bankers suggest the US economy might be headed for a slowdown next year, while the chances of a full-blown recession will rise to 50 per cent in the year 2020. Experts believe international trade woes, and gains in domestic inflation could weigh on the pace of US economic expansion.

© Photo : https://twitter.com/swiftcommunity/
'US Bullying SWIFT Shows How Dysfunctional Financial System Is' – Economics Professor
A new poll by Reuters found 35 per cent of economists believe a recession could break out in the US in the two coming years. Only 15 per cent of respondents believe an economic downturn could happen within the next 12 months.

The poll's results mark an increase from 30 per cent of economists polled last month, who believed a recession could hit the world's largest economy in the next two years.

Experts said the positive effects of US President Donald Trump's tax cuts could start wearing out as soon as next year. This despite a recent pickup in capital investment, solid gains in consumer demand, and low unemployment — projected to go below 3.7 per cent before the end of this year.

"The economy is facing a growing number of headwinds, including the lagged effects of previous interest rate rises and dollar strength, the uncertainty of trade protectionism at a time when external demand is slowing, and a sense that the support from the fiscal stimulus will gradually fade," James Knightley of the Dutch bank ING said.

© REUTERS / Leah Millis
Analyst Claude Barfield on US-China Trade War: Trump Brags About Things He Doesn't Know End Of
Experts believe US GDP growth could start slowing as soon as this quarter. Some economists expressed doubt Trump would be able to enforce the second round of tax cuts — which his administration reportedly started working on last month — due to partisan disagreements on Capitol Hill.

Additionally, economists said the ultra-low unemployment figures coupled with persistently-low labour productivity will eventually push the costs of workforce up and weigh on the profitability of US businesses.

"The main risk to the upside likely stems from the tight jobs market and whether wages can continue rising," Knightley said, "We look for economic growth to slow through 2019 and this should see inflation pressures gradually recede late next year".

For their part, investment bankers from Goldman Sachs said they expect yearly economic growth to slow to 2.5 per cent and 2.2 per cent, respectively, in the first and second quarters of 2019. Their assessments contradict previous statements from Trump administration officials, who expect GDP growth to remain at 3 per cent per year in the medium-term.

"Growth is likely to slow significantly next year, from a recent pace of 3.5 per cent-plus to roughly our 1.75 per cent estimate of potential by end-2019," Goldman's chief economist Jan Hatzius wrote in a note. "We expect tighter financial conditions and a fading fiscal stimulus to be the key drivers of the deceleration".

Indeed, Federal Reserve officials have recently reaffirmed their commitment to further tightening of the central bank's monetary policies. The Fed is expected to raise base interest rates by 0.25 per cent to the gauge of 2.25-2.50 per cent next month, while the majority of economists are expecting three more rate hikes next year.

© Photo : Pixabay
Top Federal Reserve Official Touts Solid Economy, Tighter Policy
This would bring base borrowing costs in the US to 3.00-3.25 per cent by late 2019, making it harder for businesses to secure financing and refinancing for their investment projects and existing liabilities, while consumers will face higher interest on their loans as well — potentially squeezing their purchasing power.

Meanwhile, former US Treasury Secretary Larry Summers, who served under President Bill Clinton, believes there is a 50-per cent chance of a recession by the year 2020.

"I think the risks if we have a recession are very, very serious so they need to bend over backwards to avoid that," Summers said, suggesting the Fed should bring down its interest rates to support domestic borrowing, investment, and consumer demand.

But some economists don't believe a recession is that much of a realistic possibility.

"We don't expect another recession until 2021, at the earliest," Byron Wien of Blackstone Group's Private Wealth Solutions Group said. "The Fed is doing the right thing," he added.

Meanwhile, Trump administration officials say the ongoing deregulation of both the financial sector and Main Street economy, along with the oil boom in North Dakota and Texas, and rising capital expenditures in the private sector, all suggest the economy is on the right track.

Next Economic Recession Could Hit US in 2020 - Poll