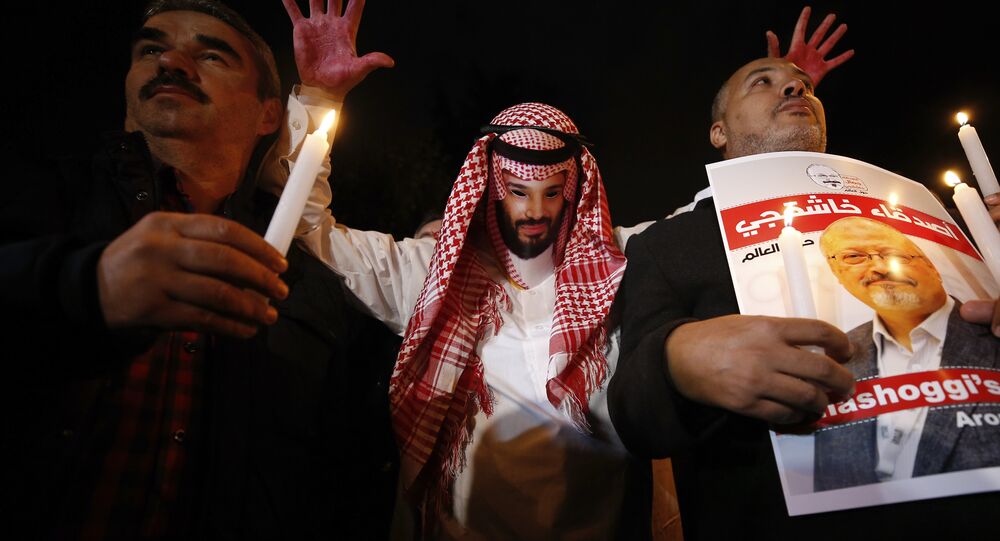 Humanitarian considerations? Wall Street knows a good bet when it sees one.

© Sputnik
About Face! After Khashoggi Incident, Mattis Announces Shift on Yemen
Following the killing of Washington Post journalist and former Riyadh insider Jamal Khashoggi within the Saudi Arabian embassy in Istanbul, Wall Street, briefly shy about the oil-rich kingdom's apparent abuse of human rights and freedom of the press, has roared back to its former close relationship, according to a new Bloomberg report.

Less than a month after Khashoggi was murdered inside the Saudi consulate in Turkey, the global financial architecture is inching its way back to Riyadh with the excuse that the rewards of doing business with the repressive kingdom outweigh by far any downside.

Entering into financial relationships with Riyadh is "not something I'm ashamed of," stated global investment titan BlackRock head Larry Fink on Thursday in New York City, one day after the top prosecutor in Ankara accused Saudi agents of strangling Khashoggi and then dismembering his body for transport in "five suitcases," cited by Al Jazeera.

But while progressive minded investors may flinch at the morals of some of their holdings, a banking infrastructure dedicated to wringing the last coin out of every transaction has no qualms about who it will cozy up to, according to the Bloomberg.com report.

While a few heavy hitters in the financial world made a show of protest following the murder, little has changed, claims the report.

As a form of protest against the extrajudicial killing, the passing up of a high-profile investment conference run by Saudi Arabia's crown prince just two weeks ago has accomplished nothing, according to JPMorgan Chase & Co. CEO Jamie Dimon, cited by CNBC.

Until recently, there had been "almost no pricing of the political risk in the kingdom," according to Eurasia Group spokesman Ayham Kamal, but that may have changed slightly in the wake of the Khasshogi killing.

"The most recent events have shifted investor opinion," Kamal noted, cited by Financialexpress.com.

But any monetary blowback against Riyadh is muted at best, as Saudi Aramco, the national oil firm, which saw a $33.8 billion profit over the first half of 2017 and had almost no debt, continues to attract investment.

Riyadh's crown prince has gone on a buying spree recently as well, acquiring a a $450 million Leonardo da Vinci painting, a $300 million French chateau and a $500 million yacht, according to a recent report by Nytimes.com.

Even as the Khashoggi crisis hit its media frenzy peak some two weeks ago, yields on 10-year Saudi debt rose to about 4.44 percent, over this year's 4.2 percent average, cited by Bloomberg.

Bankers note the impossibility of avoiding the influence of Saudi Arabia as an attractive investment opportunity, particularly as the regional Middle East kingdom becomes increasingly modernized, according to Bloomberg.

Financial leaders, hoping that world attention on the Khasshogi murder will quickly dissipate, have noted that pulling out of the market in Riyadh is a non-starter, particularly as Washington and Tel Aviv — who, like the kingdom, are set against Iran — have given the impression that the grisly killing can be overlooked, after Riyadh asserted that the crime was committed by rogue agents not connected to the Saudi authority.

Israeli Prime Minister Benjamin Netanyahu's spectacular equivocation echoed the sentiment of those with significant monetary, political and military investment in the kingdom.

"What happened in the Istanbul consulate was horrendous," Netanyahu asserted, quickly adding however, that, "At the same time, it is very important for the stability of the world, for the region and for the world, that Saudi Arabia remain stable."

"If you're looking at reasons to buy or sell Saudi bonds, the number one factor is the oil price," said London's GAM Ltd. fund manager Paul McNamara.

"I hesitate to say there is a Khashoggi factor in the way Saudi bonds are trading," McNamara stated, adding that "the oil price is overwhelmingly more important than anything else," cited by Bloomberg.