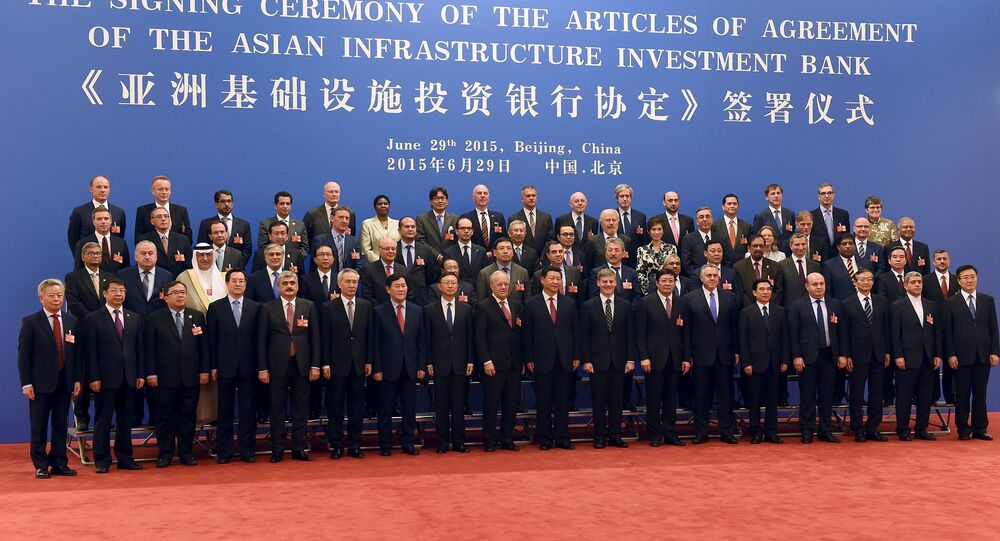 The agreement will help the banks "boost economic growth and prosperity in the region" and "enhance its internal and external connectivity in terms of trade, investment and business links" in addition to strengthening knowledge-sharing on multiple fronts such as temporary assignments and staff exchanges, an AIIB press statement read.

© REUTERS / Damir Sagolj
China's Silk Road to 'Fill the Gap of Former World Order' - Scholar
"We are joining hands with EDB to address the significant infrastructure financing needs in the Eurasian region," AIIB Vice President Joachim von Amsberg said. "[The] AIIB believes strongly in the power of partnership with other multilateral development banks because it promotes the exchange of knowledge, experience and resources with its peers."

"This agreement is an important step toward mutual efforts in delivering sustainable infrastructure in common countries of operations," EDB state secretary and deputy chairman of the managing board Andrey Krainiy stated, adding that the EDB strongly welcomes "cooperation between our banks in addressing infrastructure needs of the region".

Eurasian Development Bank deputy chairman of the board Andrey Krayniy told Sputnik that his institution was reviewing a couple of "promising lines of cooperation with the AIIB" via "solar energy and the development of transport corridors", adding that "as far as specific projects are concerned, we have already discussed the possibility of joint efforts in modernizing Saint-Petersburg's water-supply system."

Agreements with Other Banking Institutions

AIIB president Jin Liqun has signed numerous co-financing agreements in the past between major multilateral banking institutions, including the World Bank, IMF, and many others, to participating countries meet ambitious UN Sustainable Development Goals (SDGs) as well as "generate interest among private sector investors in Public-Private Partnerships" and others.

The MoU plans to deepen cooperation between both banks by sharing information and knowledge on development as well as Islamic financing, in addition to facilitating sustainable infrastructure in energy, transport and telecommunications, rural water supplies, sanitation, and others.

In 2017, the AIIB agreed to cooperate with some of the world's largest investment banks during its 2017 Global Infrastructure Forum, with representatives from the African Development Bank, Asian Development Bank, European Investment Bank, Inter-American Bank and others pledging contributions and deeper multilateral partnerships.

President Jin said that he was grateful for the World Bank's "generous and timely support" and looked forward to a "long and fruitful relationship" with the financing institution.