Tesla has once again come under fire. Thirty-five former and current employees of the company told CNBC that Musk’s ambitions to micromanage every project and rely on automatic processes rather than on the team of engineers led to Musk approving expensive projects that failed or delayed production.

The employees in their interviews specifically referred to Tesla Model 3. This particular model was meant to be an affordable electric car that could help Tesla achieve more car sales and expand the market. However, Musk insisted that three of the four tiers of car parts be put together by machines, from the easiest parts to the most difficult items like wire harnesses.

The team of engineers tried to explain that robots can only replace manual labor to a certain extent; like machines being unable to put seals on Model 3 cars, however, the Tesla CEO remained steadfast. Model 3 factories included expensive machines on the production line, yet they weren’t working properly. As a result "primary seal automation" was designated for removal in the first quarter of 2018 and was actually taken out only by in summer. Musk acknowledged in his Twitter that his idea to fully automatize the production was a mistake

Yes, excessive automation at Tesla was a mistake. To be precise, my mistake. Humans are underrated.

The Tesla CEO’s management style is the first thing a person associates with the company. A former Tesla and SpaceX employee, Spencer Gore, who is now the CEO of Impossible Aerospace, said that “Elon's unconventional style is what built the Tesla we all chose to join.” 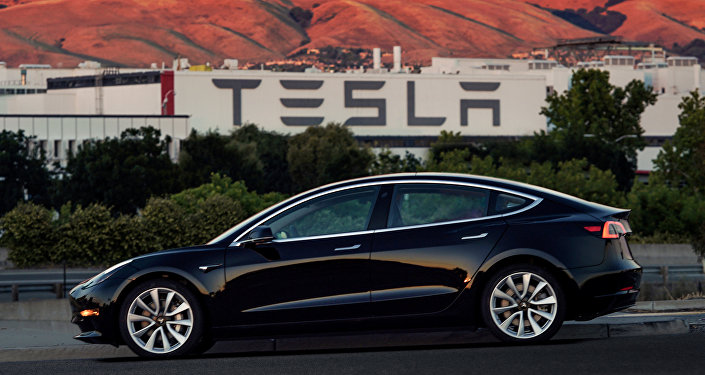 © REUTERS / Handout
'Incorrect': Elon Musk Refutes Claims James Murdoch Will Replace Him as Tesla Chairman - Reports
However, not all employees agree that such a style is beneficial to the company. Former Tesla employees have described, for example, a “vision system” that included high-resolution cameras to take photos of cars during assembly and transmitting them to computer screens for engineers to save time. Unfortunately, the cameras couldn't get a clear shot of some of the key parts and connections that quality inspectors needed to evaluate in every car.

Another expensive project that didn’t go smoothly was called a “magic carpet”, to move parts to workers on the Model 3 production line using software-controlled conveyors. Tesla spent around $40 million on equipment and dedicated around 20 engineers, yet the system never worked.

“So we actually didn't have time to order new equipment because it would have taken too long to arrive. So we took the conveyors that we discarded from the GA 3 line, which didn't work. Or it was way too complex to actually move our products,” one of the employees told CNBC.

Musk is also said to reject any approach that has already been taken by other car-producers in the industry, even creating a special Tesla-jargon for commonly used things. Rejection of outside expertise has extended to best practices, which has made production more efficient elsewhere.

© AP Photo / Kiichiro Sato
Tesla CEO Musk Settles With US Securities Regulator in Fraud Case - Statement
The same purpose Musk tries to achieve by decreeing that Tesla must build its own software instead of relying on commonly used ones. One of Tesla's many in-house business applications is a purchasing order system called WARP, which is also used for car work orders in service centers.

While most Tesla-made software tends to improve over time, recent employees say WARP is seemingly never complete and has made it hard for them to keep track of whether their projects are staying within budget as the reports often fail to be delivered or, accounts payable occur to be too busy to send a detailed report and simply asks how much Tesla employees need to spend, then replying with a quick approval or denial.

“Elon Musk himself agrees that he automated too much, too soon,” said Ram Ramasamy, Frost & Sullivan's industry director for automation. “He probably could have avoided a lot of problems by starting small, failing fast, then driving adoption and changing the culture to scale what works.”

Steve Finch, a former GM plant manager who has about 40 years of automotive experience, notices that Musk's approach could eventually set Tesla apart.

“Elon Musk is not afraid of a mistake. He thinks it's probably the way Tesla will actually achieve success. […]The question is: Will this put your people at risk, or will you have enough time and money to weather the inevitable failures?” he said.