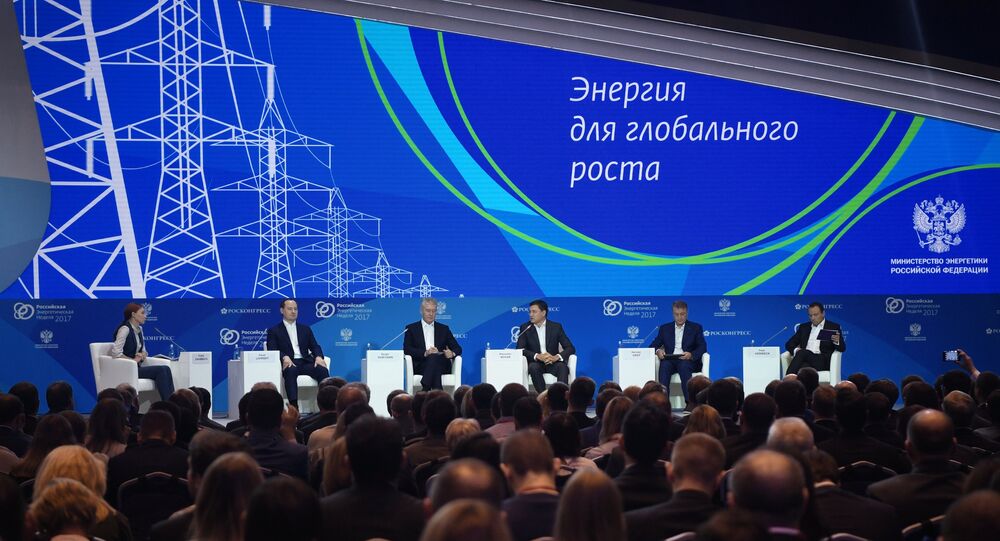 MOSCOW (Sputnik) - Russia is planning to boost the production of liquefied natural gas (LNG) securing a 20-percent share in the global market and producing up to 80-90 million tons of LNG per year, Russian Energy Minister Alexander Novak said on Wednesday.

"We intend to develop the production of liquefied natural gas in Russia. Last year, Russia's share in the global market was at 4 percent… We set the goal to reach the LNG market share of about 20 percent and increase LNG production in Russia up to 80-90 million tons," Novak told reporters on the sidelines of the Russian Energy Week forum.

The event was first held in 2017 and serves as a platform to demonstrate the prospects of Russia's fuel and energy industry and exploring the potential of international cooperation in the field. This forum is Russia's largest trade event dedicated to analyzing trends in the global fuel and energy sector.

"Oil output was at the average of 11.35 million barrels per day in September," Novak said, adding that oil production in October would depend "on market needs."

He noted that the Russian Energy Ministry could not give an accurate forecast for oil production levels until the end of the year as for the same reason.

Speaking on the sidelines of the Russian Energy Week, the minister stressed that Russia had not yet reached its oil output ceiling and had the capacity to increase it.

"We expect approximately 555 million tonnes this year… Our forecast is that we can increase oil production," Novak told reporters.

© AP Photo / Richard Drew
US Interior Secretary: Naval Blockade is an Option for Dealing with Russia
He noted that the long-term forecast for the oil prices could be only done in late 2018-early 2019.

Novak said on September 23 that the Organization of the Petroleum Exporting Countries (OPEC) and non-cartel producers were likely to return to the 100-percent compliance with the Vienna deal as soon as September or October by stepping up oil production.