Economists in both the private sector and international organisations are warning of mounting downside risks to global economic expansion, saying many countries have limited options to counter rising headwinds.

Kristian Rouz — Economists from both the private sector and international organisations are warning that the pace of economic expansion outside of the US is hardly encouraging.

At the same time, the US economy appears to have achieved a sustainable GDP growth rate due to fiscal stimulus policies, the positive effects of which might fade away in the medium-term, exposing the global economy to mounting risks of a new recession.

According to a recent report from the Organisation for Economic Cooperation and Development (OECD), the current expansion cycle in the global economy could be past its peak due to risks of disruptions in the international exchange of goods and services.

"The expansion may now have peaked," OECD analysts wrote. "Global growth is projected to settle at 3.7 percent in 2018 and 2019, marginally below pre-crisis norms, with downside risks intensifying."

The nascent realignment in global supply chains means industrial enterprises in advanced nations are gradually scaling back the offshoring of their manufacturing facilities and capitals, as well as the exports of technology to developing countries. 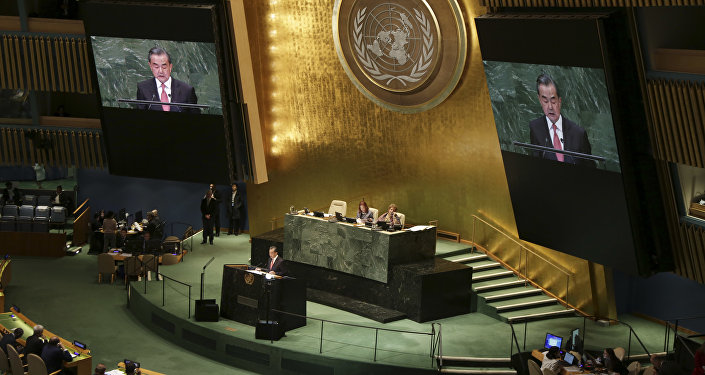 © AP Photo / Seth Wenig
China Says It Won't Bow to 'Blackmailing' Amid Escalating Trade Rift With US
This could dampen economic expansion across emerging markets, whilst their exposure to borrowing in hard currencies has exposed their economies to risks of currency crises — as exemplified by Turkey, Argentina, and South Africa over the past few months.

Some economists point out these changes could leave the US as the only robustly expanding economy amongst the advanced nations, as GDP growth in Europe and Japan still remains subdued.

But the US could also start slowing down, unless the Trump administration ramps up its efforts to advance supply-side reforms aimed at reinvigorating the nation's productive forces. Such reforms could include further deregulation and a loosening of environmental standards, a new round of tax cuts, and higher interest rates to erase America's whopping $13 trillion household debt.

"When the downturn in the US economy starts, the effects (on share prices, interest rates, capital flows, emerging countries, exchange rates, global trade and global growth) will be very pronounced," Patrick Artus of the French investment bank Natixis said. "This downturn in the U.S. economy is inevitable as the United States is returning to full employment."

Indeed, the US jobless rate stood at 3.9 percent in August, and as employers are struggling to fill their vacancies, they have to raise wages, driving labor costs. In turn, this leads to lower profitability of US companies, which, unless they boost their presence in overseas markets or get more tax cuts, could eventually decrease their output and lead to workers being laid off.

© Wikipedia / User Kalan
Iraqi Trade With Russia Surged to $1.4Bln Over Past 2 Years - Ambassador
This could be a blueprint for the next US recession.

"This fiscally induced expansion will be difficult to sustain in the absence of a much more substantial jump in investment to lift the economy's growth potential," analysts of the British bank Barclays Plc wrote. "In the absence of such a jump, the economy will face heightened risks of a hard landing in 2020."

Meanwhile, the ongoing trade tensions between the US and China could lead to a "big slowdown" in global economic expansion, warned a former British bank regulator. Trumponomics in the US could drive inflation, prompting the Federal Reserve to hike rates more aggressively — which would make dollar liquidity less affordable to overseas borrowers.

"And that may then produce quite a sudden slowdown in the US economy," a former chair of the UK Financial Services Authority (FSA), Adair Turner, said.

© AFP 2019 / THIERRY CHARLIER
Risk of US-China Trade Disagreements Growing Now Higher Than Ever - EU Commission
Additionally, high finance and refi costs outside of the US could prompt or exacerbate currency crises across emerging markets, whilst advanced economies could face elevated pressure of their own debt burdens.

"Then a slowdown in the European economy, and where do I think the trouble will then arise? Well, maybe right here. Italian government debt is only sustainable if the Italian economy keeps going," Turner stressed.

In this light, a quicker rebalancing across the advanced economies is necessary to ensure their own sustainability in the long-term perspective.

For their part, emerging markets have several options — which include bilateral deals with developed countries, tighter cooperation with China and its credit initiatives such as Belt and Road, and deeper regional integration — or a combination of the three.