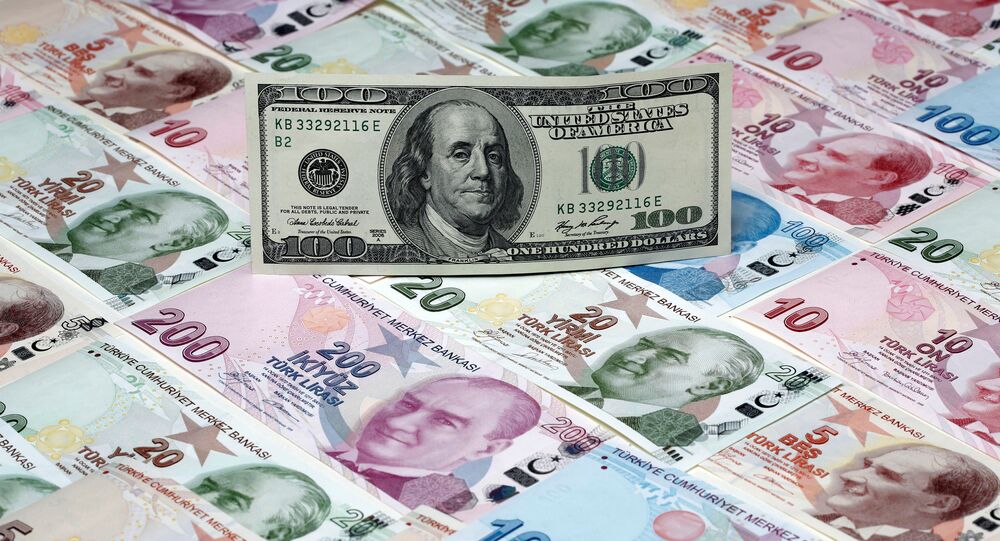 Earlier this week, Turkish President Recep Tayyip Erdogan lashed out at Western rating agencies, such as Moody's and Fitch, for their negative review of Turkey's economy, having also accused them of trying to disrupt the country's banking sector.

Speaking at a Turkey-Kyrgyzstan Business Forum in the Kyrgyz capital Bishkek on Sunday, Recep Tayyip Erdogan said that currency manipulations sought to “cast doubt on Turkey’s strong and solid economy.”

The Turkish president has suggested that dependence on the dollar in international trade constitutes a bigger problem that must be solved.

“We need to gradually end the monopoly of the dollar once and for all by using local and national currency among us,” Anadolu news agency cited him as saying.

He also vowed he would pursue non-dollar transactions in trade with Russia and other countries.

"America behaves like wild wolves. Don't believe them. Using the dollar only damages us. We will not give up. We will be victorious," he added.

Over the weekend, Erdogan also blasted Western rating agencies for undermining Turkey's banking sector amid attacks on the national currency.

"If they have their dollars, we have our God. They can't topple Turkey with dollars. Never mind those impostors, those racketeers. They have said a lot of things about us," he said.

Political and diplomatic tensions between Ankara and Washington sparked concerns on the markets last month after US President Donald Trump threatened to impose economic sanctions on Turkey over American pastor Andrew Brunson, currently detained in Turkey.

In June, the US Senate passed a bill banning the sale of the F-35s to Turkey citing Ankara’s planned purchase of two batteries of the S-400 air defense missile system from Russia.

Erdogan, for his part, responded by saying that Turkey did not need permission from anyone to guard its territory.