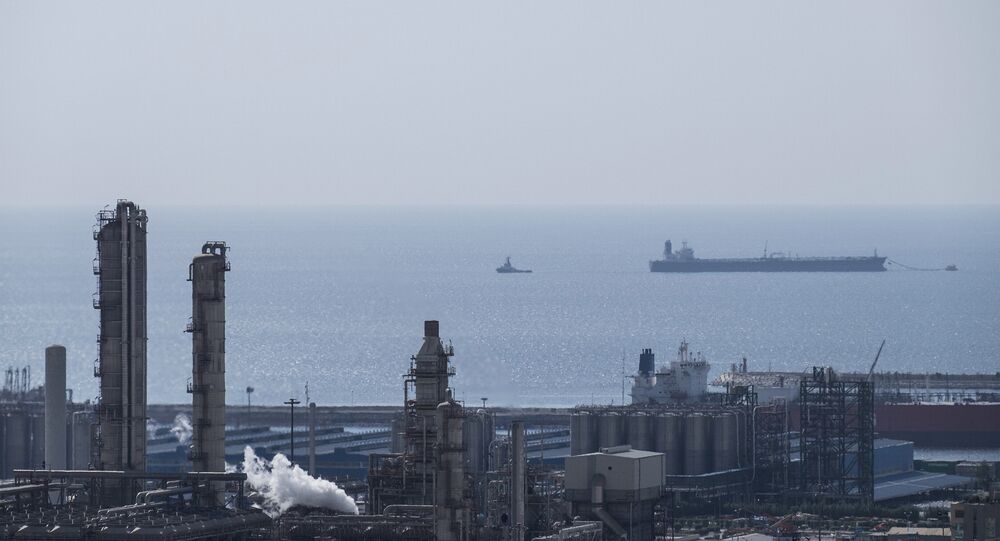 Last week, Iranian Vice President Eshaq Jahangiri assured that even if the EU countries fail to deliver on their promises pertaining to the Iran nuclear deal, Tehran will be "seeking solutions to sell our oil and transfer its revenues."

Saudi Arabia's Energy Ministry adviser Ibrahim al-Muhanna has admitted that removing all Iranian oil from the market will be a formidable task.

"Current [US] sanctions are unlikely to stop Iranian oil exports completely, as almost all experts agree. I mean, they will continue to export 1 million [barrels per day] or so," Iran's Press TV news agency quoted al-Muhanna as saying.

The remarks came as the US oil and gas news agency Platts reported that Iran's LPG (Liquefied Petroleum Gas) shipments in August increased by 84,000 metric tons against July to about 568,000 tons, which the news agency said is "the highest since the previous Western sanctions were lifted in January 2016."

According to Platts, the majority of the shipments loaded or due for lifting are destined for China, which remains Iran's top crude oil buyer, importing almost 655,000 barrels a day on average from the Islamic Republic in the first quarter of this year.

Earlier this month, China started to circumvent US sanctions by issuing Yuan-denominated oil futures, as well as ceasing trade of US oil imports. Sinope's trading division Unipec decided not to buy or sell any shares of US crude until October.

In a separate development in August, Iran's Vice President Eshaq Jahangiri expressed hope that "European countries can meet their commitments" under the Iran nuclear deal, also known as the Joint Comprehensive Plan of Action (JCPOA).

"But even if they cannot, we are seeking solutions to sell our oil and transfer its revenues," Jahangiri emphasized.

His statement was preceded by several EU foreign ministers along with High Representative Frederica Mogherini pledging that "the remaining parties to the JCPOA have committed to work on, inter alia, the preservation and maintenance of effective financial channels with Iran, and the continuation of Iran's export of oil and gas."

Although Brussels promised to grapple with Washington's anti-Iranian sanctions, some major European companies, such as the French oil giant Total, have already suspended plans to invest in the Islamic Republic since the first phase of US sanctions came into effect on August 7.

The first phase saw the slapping of sanctions on trade with Iran involving the Iranian currency, sovereign debt, cars, aircraft, gold and other metals.

© REUTERS / Raheb Homavandi/File Photo
'US Sanctions on Iran Will Not Have Any Impact & Will Fail' - Oil Economist
Washington plans to add Iranian oil and gas to the sanctions during the second phase, due to be reintroduced in early November as part of US President Donald Trump's decision to withdraw from the Iran nuclear deal.

Washington warned that these countries' companies should scrap their oil imports from Iran or risk sanctions if they continue purchasing Iranian oil after November 4.