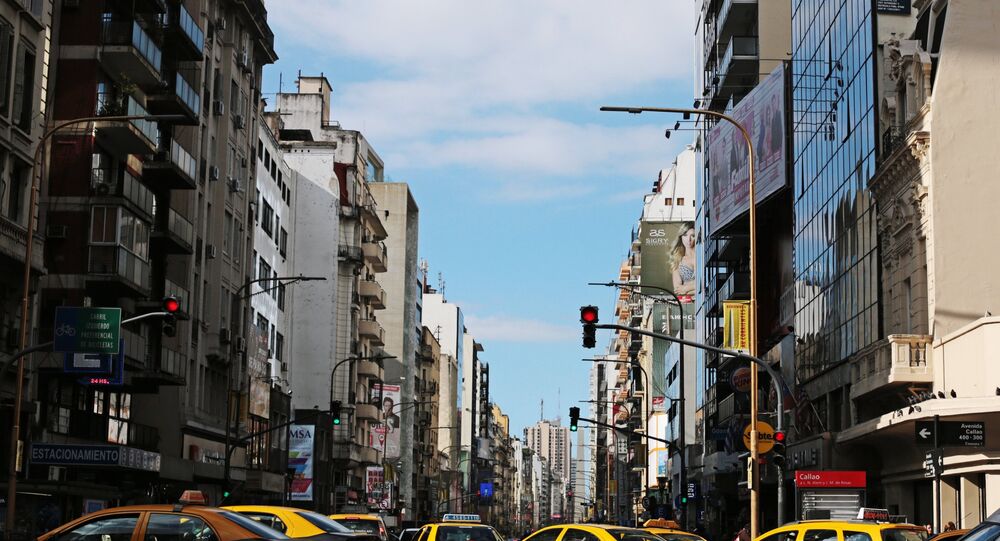 The ongoing currency crisis in Argentina is likely to trigger a recession as soon as this year, the government said, and poverty is expected to rise as inflation is spiraling out of control.

Kristian Rouz — Argentina's finance ministry said the economy would contract this year in the wake of a currency crisis, heightened political risks and an unfavorable foreign trade environment.

This downgrade comes just days after President Mauricio Marci confirmed his expectation that poverty would rise amid a looming recession.

Argentine Treasury Minister Nicolas Dujovne said the nation's economy would contract by 1 percent in 2018. He added that he expected a rebound towards a 1.5 percent expansion next year — however, even a medium-term outlook is currently marred by elevated uncertainty.

"Next year the economy will grow," President Macri said. "Not much, but it will grow."

In addition, Argentina experienced a severe drought this year, crippling its agricultural output and farming sector sustainability, which adds to the economic woes. Many Argentine farmers have significant leverage and might now struggle to service their debt in the face of a decline in earnings.

President Macri has said he expects a rise in poverty this year. The nation's poverty level dropped to 25.7 percent last year from 30.3 percent back in 2016 — but last month's inflation rate of 31.2 percent points to a likely reversal of the trend.

"This devaluation brought a rebound in inflation, and inflation is the largest driver of poverty, and regrettably, we are going to lose some of the gains we have made in poverty reduction," Macri said.

© AP Photo / Alberto Raggio,DyN
Brazil, Argentina Markets Hit Hard by Domestic and Overseas Turmoil
Dujovne also said that the cabinet still expected to maintain its budget deficit target at 2.7 percent GDP for this year, in line with the International Monetary Fund's (IMF) conditions attached to its assistance program for Argentina.

The battered country has applied for a $3-billion standby loan from the IMF, which the Argentine government expects to obtain next month.
Dujovne also said that the ongoing corruption scandal, involving top officials from the previous administration, would likely hurt Argentina's investment appeal, with negative effects of this development passing on to the broader economy as well.

However, the graft probe — which revolves around former President Cristina Fernandez de Kirchner — is expected to help Macri reduce the political consequences of the unraveling economic meltdown.

"Anything that tarnishes the Kirchners is a gift to Macri," Benjamin Gedan of the Argentina Project, and formerly a White House official, said. It would "give Macri some breathing room, which is what he needs until the economy finds some life."

Meanwhile, Argentine inflation has surpassed wage growth this year. Last December, wages grew 26.5 percent year-on-year compared to an annual inflation rate of just below 25 percent. This past May, wage growth slowed to 24 percent, whilst inflation surpassed 26 percent — shooting above 30 percent in July.

Macri's market-friendly economic agenda is now at risk, experts say, as the president promises reforms aimed at boosting GDP growth, bringing down inflation and improving the quality of life for most Argentines.

However, prices of natural gas, electricity and water have all increased dramatically this year, adding pressure on the purchasing power of Argentine consumers. The Argentine Observatory of Social Debt said in a recent report that it expected the poverty rate to increase by 2-3 percent this year.

"Most people are feeling very uncertain about where the economy is going," Daniel Kerner of Eurasia Group said.