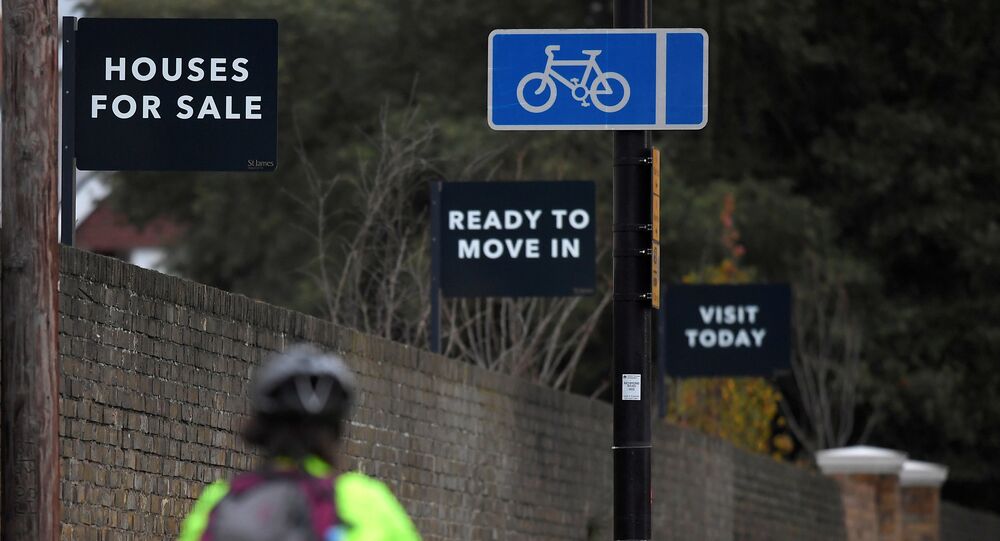 A housing bubble in the UK is gradually deflating due to an ongoing massive sale of residential properties fuelled by Brexit concerns, which is poised to alleviate lingering affordability issues.

Kristian Rouz — British home values declined for a fifth consecutive month in July in their longest losing streak since the global financial crisis. The ongoing depreciation, however, has a silver lining to it: homes are becoming more affordable. The declining prices have also eased the concerns of a possible housing bubble, which had been rife in the pre-Brexit referendum UK.

© AP Photo / Matt Dunham
UK Economy Gains Momentum in Q2 Despite Slump in Manufacturing
According to a report from Acadata, British home prices dropped 0.2 percent last month to an average of £302,251 ($386,000) per home. Simultaneously, home sales in London declined by 7 percent year-on-year. This coincided with a decline in effective demand, both among EU and non-EU citizens.

Separately, Albert Edwards, an economist from the French investment bank Société Générale, said UK home prices could drop by as much as 12 percent as the property bubble gradually deflates. British real estate surged more than 50 percent over the past decade amid the post-crisis recovery.

Edwards said the Bank of England's (BoE) easy money policies of the past decade (with base interest rates as low as 0.25-0.5 percent) had spurred a debt-fuelled demand for housing. Meanwhile, open-border immigration policies made it easy for non-UK citizens to park their money in prime real estate in the UK.

"What you are doing is lending them more money, backed by the taxpayer, to push up house prices even more," Edwards said.

But those days are likely over, experts note, as the UK's separation from the EU, slated for March 2019, along with the BoE's hikes in interest rates, are poised to stave off the superficial demand that had created the housing bubble.

In this light, housing is set to become more affordable and within the reach of first-time home buyers and young families. According to Halifax data, an average home with a price tag of £230,000 could depreciate by another £30,000 within the coming months.

This comes amid a resurgence in the British construction sector, which is poised to add to the housing supply. A tighter labor market and higher wages, coupled with lower home prices, are expected to make up for the higher mortgage costs, which stem from the gradually rising BoE interest rates.

"(Consumer) expenditure trends have been relatively subdued in 2018 so far, which can be linked in part to disappointing growth in real earnings despite a tight labor market, while the recent interest-rate hike by the Bank of England is likely to add to further pressure on households' budgets," Annabel Fiddes of IHS Markit said.

© REUTERS / Peter Nicholls
China’s Waiting to See What the UK Can Get Out of Brexit – Economist
BoE economists are expecting the low unemployment and workforce shortages to produce further gains in disposable household incomes. However, sudden Brexit shocks or other risks to financial stability might erase the positive effects of the tight labor market.

Additionally, experts have observed a sell-off in property assets in recent months. This comes not least due to the expected tightening in the immigration law, as many non-UK citizens are rushing to dump their British homes amid the looming immigration limbo.

According to the data from the real estate website Rightmove, sale listings rose 8.6 percent in July, coupled with "no corresponding increase in buyer numbers to soak up the new seller influx."

Many of the UK's would-be and first-time homebuyers are expecting prices to drop further, as affordability is still a concern for the majority of Britons. However, the demand is expected to offset the mounting excess in supply by the year-end — once the last remaining Brexit uncertainties wane.

"An increase in the number of properties for sale will have to be matched by a corresponding increase in buyer demand if vendors are to avoid reducing guide prices to secure a sale," Nick Leeming of real estate agency Jackson-Stops said.

This further supports the expectations that UK home prices will continue to decline over the coming few months — suggesting that now's the right time to sell, while those seeking to buy a home might opt to hold off until after Brexit takes effect.