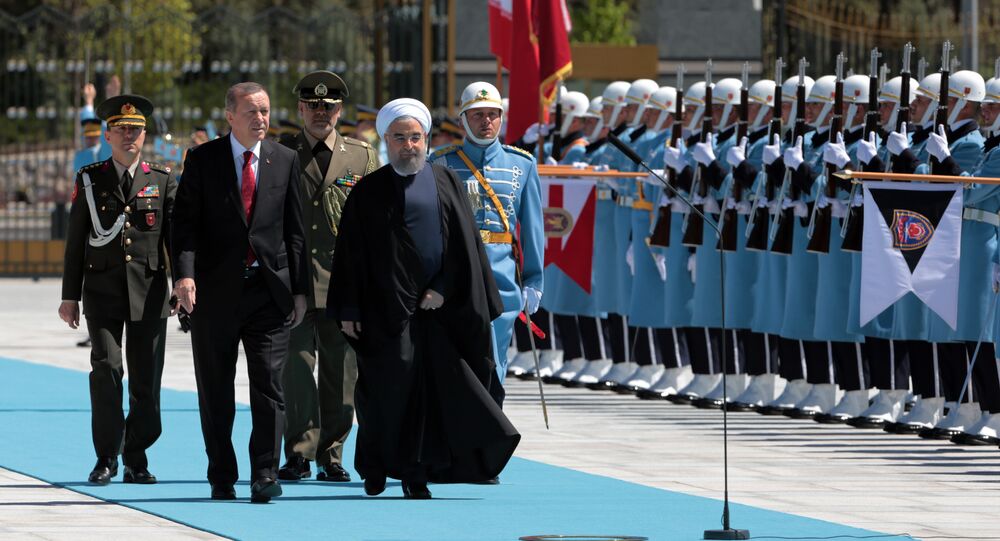 Iran is a key supplier of natural gas and oil to Turkey, which is almost 100-percent dependent on imported fuel.

Turkey will continue to buy natural gas from Iran despite US sanctions, Turkey’s Energy Minister Fatih Donmez said on Wednesday, a day after President Donald Trump threatened that anyone trading with Iran will not do business with America, Reuters reported.

Donmez said that Ankara would continue buying Iranian gas in keeping with a long-term contract it has with Tehran, adding that a Turkish delegation that is currently in Washington, would try to resolve the matter in talks with US authorities.

© AFP 2020 / NICHOLAS KAMM
Turkey Refuses to Join US Sanctions on Iran, Calls Them 'Mistake'
“A delegation of ours is in the United States right now and negotiations are being held on a series of matters including the sanctions issue,” Donmez said.

“I think a good outcome will emerge from this dialogue,” he added.

Iran is a key supplier of natural gas and oil to Turkey, which is almost 100-percent dependent on fuel imports. Even though the Turkish refiner Tupras has already cut back on oil shipments from Tehran, a complete halt to energy imports from Iran is hardly possible.

With natural gas accounting for nearly 40 percent of Turkey’s electricity production, Fatih Donmez said that Turkey would continue this trade, as “we can’t possibly leave our citizens in [the] dark.”

The Turkish minister described the US sanctions as “unilateral.”

“Even the European Union is extremely annoyed by this. We are conducting legitimate trade here,” he said.

US sanctions on Iran’s energy sector are to be re-imposed after a 180-day wind-down period ending on November 4.

The European Union, for its part, has pledged to protect the interests of European companies, which could suffer as a result of Washington’s sanctions.