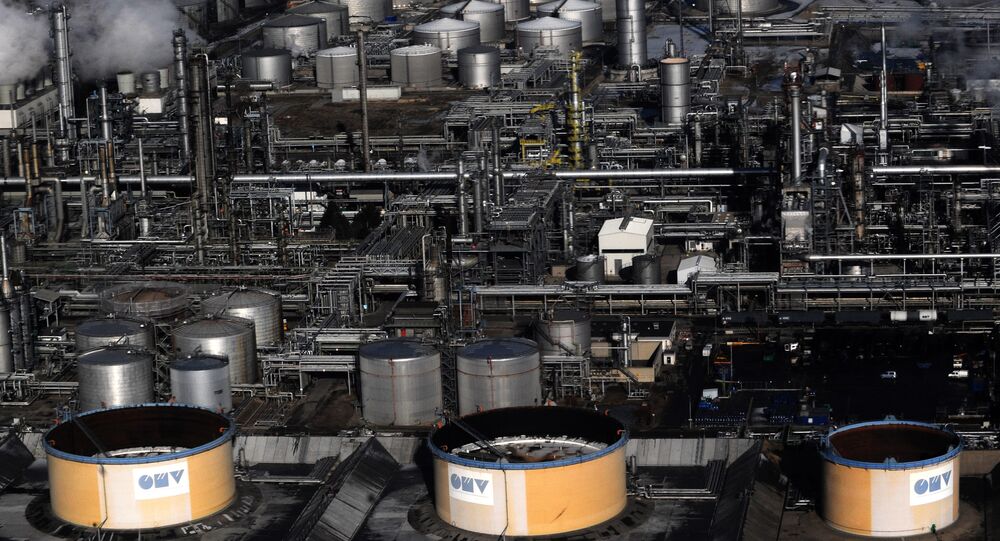 Washington has put the squeeze on Western European countries to cancel the Nord Stream 2 gas pipeline project with Gazprom and demanded that they buy vast quantities of US liquefied natural gas instead. The US has also vowed to sanction companies which buy Iranian oil supplies once US energy sanctions against Tehran step into force in November.

OMV AG CEO Rainer Seele has called on Europe's politicians to do more to protect companies from US sanctions. "There is still a risk of sanctions for European countries," Seele said, speaking to Bloomberg TV.

"We do not see any significant protection from European politicians," the official lamented.

© Sputnik / Grigoriy Sisoev
Majority of Germans Back Nord Stream 2, Distrust US Criticism of Project - Poll
OMV faces the threat of US sanctions on two fronts. Along with Royal Dutch Shell, E.ON, Wintershall and Engie, the Austrian energy giant is partnered with Russia's Gazprom on the construction of Nord Stream 2, a 55 billion cubic meter per year gas pipeline project set to run from Russia to Germany through the Baltic Sea. The project has been intensely criticized by US President Donald Trump, who has demanded that the EU buy more expensive US liquefied natural gas (LNG) instead. On Monday, Trump claimed that Brussels was mulling the construction of up to 11 new LNG ports in the wake of EU Chief Jean-Claude Juncker's pledge to import more gas from the United States. In promoting its own gas, Washington has also threatened to sanction the European companies working on Nord Stream 2. Juncker told Luxembourg television on Wednesday that Europe's "dependence on Russia has been reduced" via the decision to purchase more LNG supplies.

The second threat to OMV is the US's demand that allies suspend economic ties with Iran following Washington's exit from the Iran nuclear deal in May. The US's decision to reimpose sanctions against Tehran includes sanctioning any countries which do business with Iranian energy concerns. Earlier, the US State Department demanded that countries buying oil from Iran bring their purchases down "to zero" by the time sanctions kick in on November 4. Last month, Rainer Seele confirmed that his company would pull out of Iran before then, saying that the prospect of US sanctions was "a much bigger risk for OMV's business than any possible compensation [from] Europe…could offer."

In his Bloomberg interview, Seele said that his company is continuing to study the question of whether US politicians actually intend to sanction companies involved in the construction of Nord Stream 2. According to the official, the project has already been allocated two thirds of the necessary funding. Seele reiterated that the project was "in Europe's interests."

© AP Photo / Petr David Josek
'Addicted to Sanctions': Iran Will Not Bow to US Pressure – Foreign Minister
OMV AG began moving to reorient its gas production holdings from fields in the North Sea to sites in Siberia in 2015. The company is still waiting for Oslo's permission for an asset swap deal with Russia's Gazprom. The deal, which is expected to be concluded by late 2018, envisions OMV receiving a 24.95 percent stake in the development project at two sites in the Achimov deposits in Urengoy in exchange for Gazprom receiving a 38.5 percent share of Norwegian OMV (Norge) AS.
...
Reddit
Google+
Blogger
Pinterest
StumbleUpon
Telegram
WhatsApp
121

Nord Stream 2 Not Viable, US Gas to Be Major Player in Europe - US Energy Sec.

Majority of Germans Back Nord Stream 2, Distrust US Criticism of Project - Poll